NYAFF 2012 Review: THE LOST BLADESMAN, Forthright in Both Action & Drama 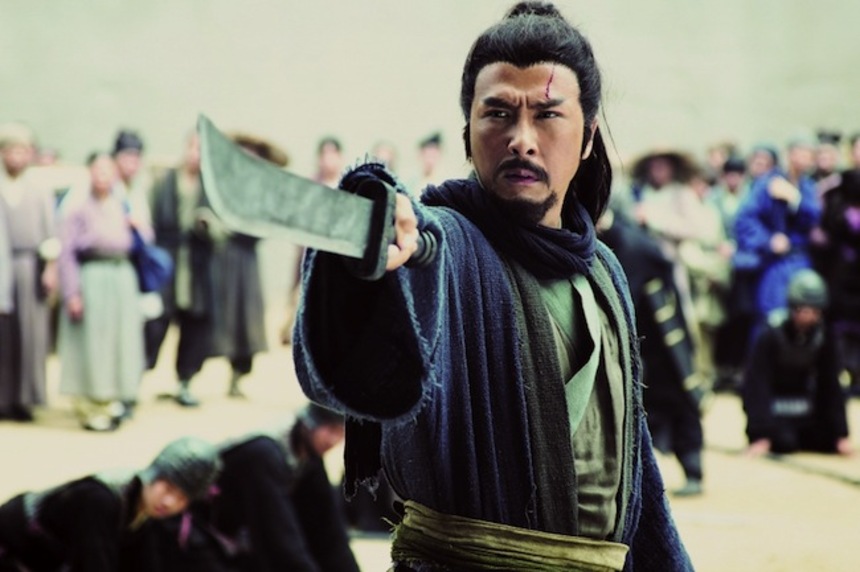 With its New York premiere happening this Saturday, July 7 as part of the 2012 New York Asian Film Festival, we now revisit James Marsh's review from April 2011.

It has been almost a decade since director Alan Mak and then-screenwriter Felix Chong combined forces with Andrew Lau to create the iconic crime thriller, INFERNAL AFFAIRS. Since then, Lau has cut the apron strings and Chong has graduated to take co-directorial credit on four films with Mak, as well as recently gaining recognition from the Hong Kong Film Awards for his first solo effort, ONCE A GANGSTER. After their little seen debut MIDNIGHT IN TOKYO back in 2005, the Mak/Chong team graduated to more high-profile projects, namely the Sammi Cheng vehicle LADY COP AND PAPA CROOK in 2008 and the solid, if unspectacular surveillance thriller OVERHEARD the following year. Now firmly cemented in Hong Kong's directorial A-list despite having yet delivered a genuinely great film, it seemed inevitable the couple would attempt a period epic, and who better to cast as deified General Guan Yu than the industry's current heavyweight champ, Donnie Yen in a film that is hands-down their best film to-date by a considerable margin.

The intensions of THE LOST BLADESMAN are best conveyed by the title of Luo Guanzhong's classic story, upon which the film is loosely based: Guan Yu Crossing Five Passes And Slaying Six Generals. With a title like that, Donnie on board as both star and Action Director, and a supporting cast that includes Andy On, Calvin Li and Wang Xuebing, audiences can rest assured the action quota in THE LOST BLADESMAN is set surprisingly high, with Donnie taking on entire armed divisions single-handed, as well as squaring off for a number of impressive one-on-one bouts. That said, those looking for another dose of IP MAN style sparring may be left wanting, as Guan Yu mostly fights with the guan dao spear (which was subsequently named after him). Over the course of the film, Donnie does fight with a variety of swords, spears and even a crossbow, but there is no hand-to-hand combat this time out.

While the film is brimming with action, there is a meaty drama at its core, given notable gravitas by the presence of Jiang Wen as the tyrannical Cao Cao, out to conquer all China in the name of the Han. After his forces are defeated at Xiapi, General Guan surrenders to Cao Cao, who attempts to recruit him. While Guan assists Cao Cao in an attack on mutual enemy Yuan Shao's troops, killing General Yan Liang (Chin Siu Hou), his loyalties remain with his sworn brother Liu Bei (Alex Fong). Out of respect, Cao Cao allows Guan Yu to leave peacefully, much to the displeasure of his advisors, who proceed to inform every general along Guan Yu's route to apprehend and kill the great warrior. For good measure, Mak and Chong throw Sun Li into the mix as Liu Bei's latest concubine Qi Lan, for whom Guan Yu has long-harboured romantic urges, and the stage is set for an emotionally-charged, high-octane adventure that remains consistently entertaining throughout.

While aspersions have been cast over Donnie Yen's suitability for the role of the great Guan Yu, based on his diminutive stature and questionable acting chops, there is no denying his technical prowess in a brawl. Whether going up against a legion of Yu Liang's soldiers or, in the film's finest sequence, engaging in a one-on-one alleyway spear fight with Andy On (on horseback!), he's at his entertaining best right here. Whatever qualms people had with Donnie Yen in LEGEND OF THE FIST, his work here should instantly dispel any concerns. His fights are fast, inventive and thrilling to watch, each one given a unique setting and graciously allowing Guan Yu's various adversaries time to shine. In one instance, Mak & Chong opt not to show us the skirmish at all, instead having a monumental battle take place, quite literally, behind closed doors. What detractors may call a cheat or concession to Donnie's diminishing abilities, is in fact a wonderfully-executed moment of levity in a film that, after a stop-start first act that endeavours to lay down a lot of history very quickly, delivers a solid hour of non-stop action.

Guan Yu is revered as a God to some degree in Buddhism, Taoism and Confucianism, with particular recognition awarded him in this part of the world by both the police and triads in equal measure. His exploits have been told and retold so many times over the past two millennia that any attempt to separate the man from the myth would be an exercise in futility and there's no denying Mak and Chong play fast and loose even with established facts here. However, THE LOST BLADESMAN is not trying to pass itself off as a history lesson, so much as a couple of hours of rip-roaring entertainment in the company of one of history's greatest badasses. Between the pair of them, Jiang Wen and Donnie Yen divide the acting responsibilities up pretty evenly, Jiang downplaying Cao Cao's notorious villainy while Donnie...well, does Donnie, albeit with some stick-on facial hair that he plucks at dramatically from time to time. The rest of the cast are present either to fall under Donnie's blade or yearn for a forbidden love, and provided you don't ask any more than that, THE LOST BLADESMAN proves a surprising yet welcome success.