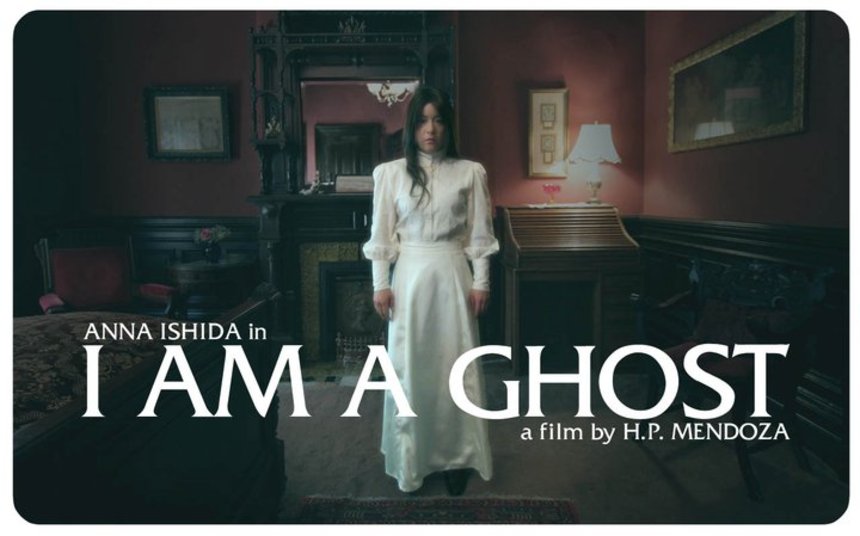 H.P. Mendoza's I Am A Ghost is a strange beast, part experimental film and part supernatural horror, the film goes places you wouldn't expect and I was hooked early on. I've mentioned my ambivalence toward experimental cinema more than once on these pages, most recently with Terence Nance's An Oversimplification of Her Beauty, and thankfully I Am A Ghost does its job brazenly and unashamedly, and perhaps that is the key to its success.

We open on Emily, the girl in the above image, going about her daily chores. She makes herself breakfast, she goes out for groceries, etc. The only problem is that these are more than routines, they are exact repeats, looped over and over again as though in a dream. We soon learn, not a spoiler, that Emily is, in fact, the titular ghost, trapped in her house and unable to leave, try though she might. Things begin to take increasingly odd turns when Emily is contacted through the ether by a medium, named Sylvia, who attempts to exorcise her from the home. However, the job will not be that easy, as the house holds secrets that may be the end of both of them.

If one were to try to pitch I Am A Ghost to a financier, I suppose Groundhog's Day meets The Sixth Sense would be as good of a reduction as any. Thankfully though, the film itself rejects any such simplification by virtue of it's remarkably intricate editing and circular rhythms. Perhaps a more appropriate comparison might be to call it Poltergeist from the point of view of the demon. I Am A Ghost is, ultimately, a unique entity. A haunted house film with no family in sight and only one character for 95% of its running time. Sparse? Yes, but effective in achieving its goal far more than I would have expected, had I see it at the script stage.

In addition to being experimental in its structure, the film's sense of style is also very odd and takes a while to get used to. With films like these, there is a temptation to make them look like period pieces. Emily is a post-Victorian character who dresses in ankle length skirts with high collars, the choice to shoot on digital, while likely budget driven, makes for an odd juxtaposition with the character and setting. Once I got used to it and started to think of the style as integral to the tone of the film, it became much more soothing. While the character of Emily may be stuck in the past, the film itself takes place in the present, or so we are led to believe, so a modern look isn't so bad after all.

I Am A Ghost is a weird one, and one that is likely to alienate many genre fans. Historically, experimental film and horror haven't mixed well, but this one hits its target, though that target may not be you. I'm always excited to see someone try something new, and when they succeed on their own terms, I'm even more excited. Call this a qualified recommendation if you must, but I Am A Ghost made me thoroughly uncomfortable, which is some of the best praise I can give a horror film.
Sign-In to Vote
Tweet 0 Submit