Review: TAKE THIS WALTZ, Sensitive and Smart, Yet Curiously Dispassionate 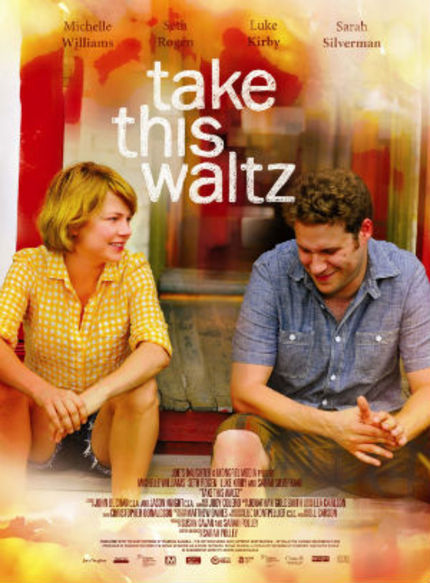 Occasionally a film will come out that for some reason has some people wildly pontificating about how "good" it is, and you watch it and agree that is good, even if you concede that you didn't like it very much. Cinematic broccoli, if you will.

Take This Waltz falls into that category. Sarah Polley, nominated for an Oscar for her adapted screenplay for 2006's Away From Her, has crafted another complicated yet human love triangle-cum-breakup movie that hits upon many of the same thoughtful notes that marked that directorial debut. Michelle Williams stars as Margot, a seemingly happily married woman who appears predestined to meet and fall in love with a man, Daniel (Luke Kirby) while on a work trip. A chance encounter turns into conversation on an airplane, followed by a shared taxi ride home where it's discovered that the two are, coincidentally, neighbors. Their mutual attraction is clear and from the get-go, Margot is entirely addled. She tells him she is married, albeit with an air of regret.

For all intents and purposes her marriage is perfect. Margot's husband, Lou (Seth Rogen), shares her sense of playfulness and they seem to have a comfortable life together in a funky neighborhood in Toronto, looking here like a colorfully muted hipster Wonderland. Regardless, Margot's malaise and unease grows, becoming ever more palpable as she continually finds fate moving her towards this new man. She makes little real effort to put a stop to the dalliance or her increasing attraction, despite being entirely cognizant of her situation and how much her husband loves her. "I don't want to hurt him," she says.

Polley's script and direction are sensitive, smart and warm, yet the film plays as curiously dispassionate. Margot, a wishy-washy personality with playful, childlike tendencies and odd phobias (she confesses to Daniel about a fear of "missed connections" in airports that require her to be transported in a wheelchair lest she actually miss a flight) comes across as sweet, juvenile, and sheltered. This is, after all, a grown woman wearing a t-shirt with the word "Freeloader" emblazoned across the chest. Though it's clear Margot is attracted to Daniel it is hard to figure out why; they had little chemistry and few real interactions. Ultimately, this left me feeling perplexed. One seemingly "pivotal" scene, in which Daniel candidly explains to Margot how exactly he would seduce her, struck me as disingenuous rather than mind-alteringly sexy, as it could have done.

Unless, of course, it wasn't meant to. In which case, Sarah Polley is a genius.

Typically, a "good" movie featuring a romantic tryst has the viewer in a similar state of wanton lust and confusion, empathizing and living vicariously through the heroine. We feel her disparate moods, our own emotional baggage projected onscreen at emotions and experiences most of us have experienced at some point or another; the electric charge of immediate attraction, the rush of rebellion, the confusion and guilt over outgrowing someone we hold dear. 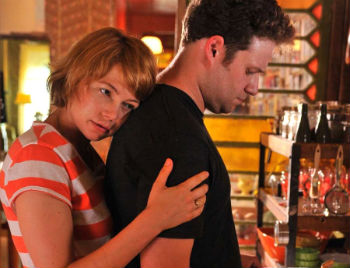 Take This Waltz doesn't quite do that; the experience was, for me, rather objective, as though I was watching a friend on a slow train-wreck, and I didn't quite understand why the accident was occurring, why they continued to stay on the train while it was happening, or why I didn't really feel all that invested about their fate. Apart from anything else, from the outside, Lou and Margot share a more interesting dynamic that Margot and Daniel. Certainly, there is something to be said for the doldrums period that can befall any relationship, but to be enticed out of a seemingly stable one would require some sort of lightning-bolt of white-hot lust. Wouldn't it?

The film itself seems to inspire a level of divisiveness, much of it aimed at Margot and her wayward heart. For what it's worth I felt a great deal of empathy towards her; outgrowing someone who is both good and good for you is a heartbreaking situation to find one's self in. I never judged her for longing for another man, I just never found myself understanding what it was about him that was so attractive. I didn't get it. Even after a second viewing, I still don't. Perhaps my Jewish disposition renders me biased on some sort of genetic level, but I found Rogen's Lou to be entirely more attractive than Kirby's Daniel. But that's not all that unusual, is it, to question someone's taste and be entirely confounded by it.

As Take This Waltz unfolds what occurs is, perhaps, the most quintessentially Canadian break-up ever put to celluloid. It's all very, very, polite.

The film does feature some rather gorgeous, clever sequences that are deserving of recognition and though they illustrated so much of what the film was about, I never found myself feeling as moved as I felt I ought. As much as they were lovely to watch and underscored the narrative, they didn't heighten or add to my own emotional response. Sarah Silverman has a small part here as Lou's alcoholic sister, Geraldine, adding some much-needed levity; the unlikely combination of Silverman singing along to Parachute Club's "Rise-Up" in an aqua-fit class left me feeling oddly patriotic. I enjoyed her performance here save for an appearance in the third act, in an oddly distracting scene which seemed tacked on and wholly disconnected from the rest of the film.

Compelling and watchable, Take This Waltz is also oddly, strangely, unsatisfying. There's an empty hollowness about a film that, for all intents and purposes, appears to be more nourishing than it actually is. As though, perhaps, there is little or nothing gained in the long run from being with one person, or another. If that is the case, then the film is an understated masterpiece and Polley is a genius. Personally, though, I prefer the intensely passionate emotional eating of empty calories over most anything that's meant to be good for me.

Take This Waltz opens in select cities across North America on June 29.

Do you feel this content is inappropriate or infringes upon your rights? Click here to report it, or see our DMCA policy.
Sarah PolleyMichelle WilliamsSeth RogenLuke KirbySarah SilvermanComedyDrama