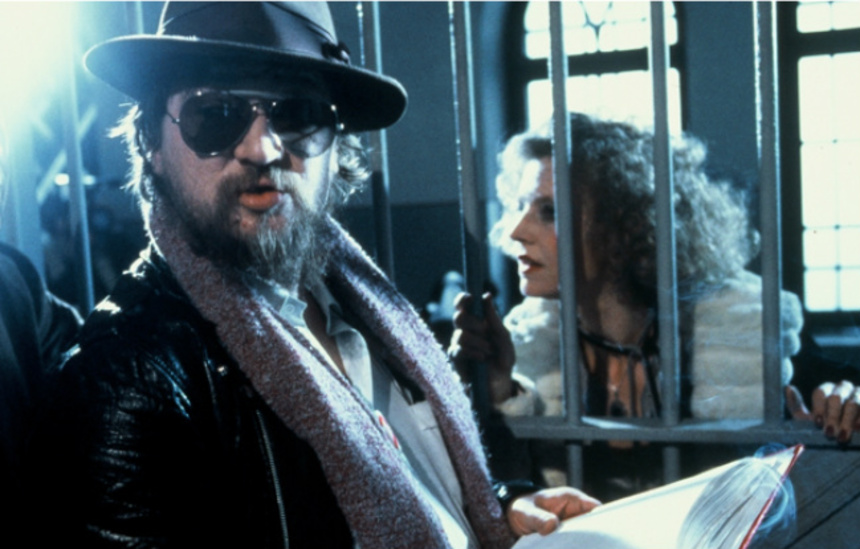 During his tragically short life, German director Rainer Werner Fassbinder  (Ali: Fear Eats the Soul, The Marriage of Maria Braun) crammed in enough sex, controversy, drug-use, perversity, abusive love, childhood trauma, and unsurpassed genius to fill out several eventful biopics. So,  it's not too much of a surprise that now two different parties are trying to bring the saga of the enfant terrible (or is that schreckliche kind?) to the screen.

Last month at Cannes, deustchfilm announced that they were working on a Fassbinder biopic with Marco Kreuzpaintner (Trade) directing. Gerrit Hermans is currently working on the script for that one. Now, the Rainer Werner Fassbinder Foundation, which was set up by Fassbinder's mother, has told Screen Daily that they're negotiating with European and American partners to put together a more official project about the director's life. According to their spokesman, "As heir and custodian of the rights to the estate, the RWFF assumes an important control function so that other film projects are considered as not being authorised in the absence of a contractual basis." Slam!

What the foundation did not elaborate on was whether or not they will gloss over the rougher aspects of Fassbinder's life, including his numerous abusive relationships,  two of which allegedly ended in the suicides of his partners, the repeated accusations of misogyny, his rampant narcissism and so on. Granted, Fassbinder lived too hard and too publicly for any movie to get away with completely smoothing out the edges but at the same time, I'm guessing we'll get a different tone from an "official" movie. As for the other project, the producer insists that they are not actually making a biopic, "but a melodrama."

In the case of Fassbinder though, it seems like a thin line between the two. Just take a look at an abbreviated synopsis of Fassbinder's life: He lived a troubled childhood, shuttled between parents he didn't get along with and sent to boarding schools which he sometimes ran away from. He came out as gay when he was 15 (yet still had numerous girlfriends and wives throughout his career) and began his directing career in the theatre. Later, he took his theatre troop with him into filmmaking (dubbing them the Antitheatre troop), often living with them and working at a frantic pace. He fell in love often and the relationships were mostly tumultous, with Fassbinder often trying to bribe lovers with gifts and lead roles in his films. He made 40 films in about fifteen years, and, in order to keep up this pace, became addicted to alcohol, cocaine, and valium, which ultimately led to an early death at 36. He was constantly followed by scandal and criticism, and his films assailed the sensibilites of the bourgeois (Chinese Roulette, among others), the radical left (The Third Generation) and pretty much everyone else in between.

All that said, given the intensely personal nature Fassbinder's movies, I doubt that either of these movies are actually necessary, or will be able to provide any new insight. It's probably best to just watch Beware the Holy Whore again and call it a day.

Meanwhile, the Cannes Film Festival is over, but Festival President Thierry Frémaux is still giving interviews with Le Monde, fending off accusations of sexism and jury corruption. The outcry about the lack of female filmmakers in competition began before the festival, and Frémaux had nothing new to add to this controversy -- just some talking circles about how affirmative action is a slippery slope and how he still thinks the the issue of females making films is very important.

More recently though, accusations have been leveled against the jury for giving four out of the six prizes to films distributed or produced by Le Pact, the company which produced Jury president Nanni Moretti's last movie We Have a Pope.  The films in question included the more eyebrow-raising prize-winners, Reality and Post Tenebras Lux.

Responding to these allegations, Frémaux said: "The rules are clear: nine jurors, one vote per person, a vote which is scrutinized twice for each prize, monitored by Gilles and myself. No manipulation possible." He goes on to note that the Palm D'or went to Amour, which was not handled by Le Pact.

But enough squabbling! The accusations leveled this week against Reality and Gomorrah director Matteo Garrone really put jury corruption at a self-satisfied film festival into perspective. According to The Hollywood Reporter, prosecutors in Naples are investigating whether or not Matteo and the Gomorrah production team paid off the mob in order to get protection while making their hard-hitting exposé of... the same mob. The allegations come after a former gang-member turned informant made a statement saying Garrone paid $26,000 to a crime kingpin during production of the film.

So... how about some quick box office news? As expected, Prometheus more or less dominated Europe in all of the territories that it opened in a week before the U.S. including France, U.K., Belgium, Denmark and Sweden. Other territories were split between Men in Black III (Italy and Germany) and Snow White and the Huntsman (Spain). As the U.S. tent pole movies keep rolling out, there hasn't been much room for local success stories. However, in France, the comedy Le Prénom has managed an impressive $25 million pull after six weeks, and three weeks in, Jacques Audiard's Rust and Bone is holding strong with a cumulative take of $10 million.