ScreenAnarchy Exclusive: First Clip From Canadian Psychological Thriller IN THE HOUSE OF FLIES! 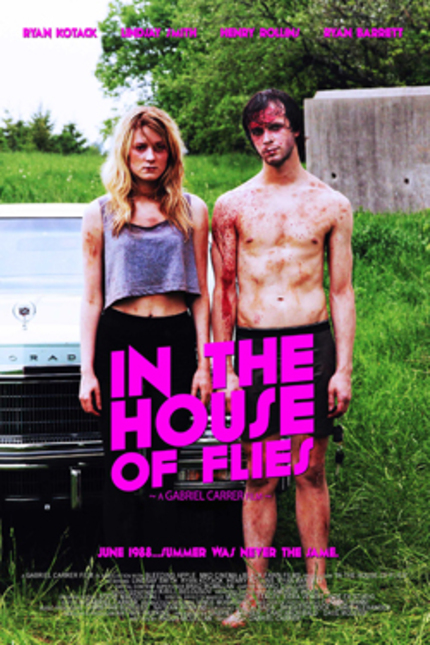 The collective of Canadian filmmakers out of Geulph, Ontario who brought us If A Tree Falls and Neverlost have just wrapped up post on their next film, the psychological thriller In The House of Flies. And we have the first exclusive clip to share with you.

In the House of Flies tells the story of young lovers whose lives are inadvertently changed forever. An innocent couple, Heather (Lindsay Smith) and Steve (Ryan Kotack) suddenly find themselves abducted. By whom? For what purpose? Alone, isolated and locked in an undisclosed, suburban basement, Heather and Steve find themselves pawns in a psychological, mind-game with their diabolical hosts.
Surrounded by several mysterious and locked suitcases - each containing valuable clues to their very own survival - Heather and Steve must exploit what remains of their bruised intellect and depleting sanity, to escape the authority of their unidentified and brutal abductors (Henry Rollins, Ryan Barrett). From this day forward, summer was never the same.

Yeah. THAT Henry Rollins. You will also find a collection of stills after the break.

Welcome back to June 1988... where director/producer, Gabriel Carrer, writer Angus McLellan are taking us back to the memorable retro-eighties with the uncomfortable and distressing, psychological thriller, In the House of Flies. The film is produced and directed by Carrer, which is the follow up film to his, '70s throwback-exploitation-cult film experiment, IF A TREE FALLS (Official Selection and World Premiere, Fantasia Film Festival 2010) and also is produced by Chad Archibald (NEVERlost, 2012, Black Fawn Films) and Dave McLeod from Bleeding Apple.
In the House of Flies, features punk-rock legend, social commentator (his nationwide, infamous Spoken Word performances), prominent writer, publisher and actor, Henry Rollins, Canadian award-winning actor, Ryan Barrett (NEVERlost, 2012) and introduces talented newcomers, Ryan Kotack and Lindsay Smith.
In the House of Flies also boasts music from two iconic Canadian bands, Saga and Brighton Rock, and Fangoria Magazine's Editor-in-Chief, Chris Alexander. The film also encompasses an intense, atmospheric score composed by Steve MacDougall.
In the House of Flies recently completed a diligent, post-production schedule and has now crossed the finish line. Plans are now underway to embark on a global film festival run throughout the remainder of 2012. 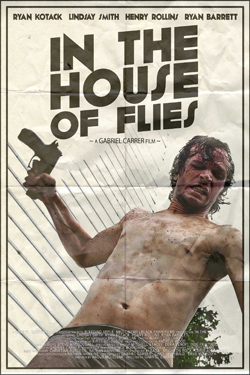