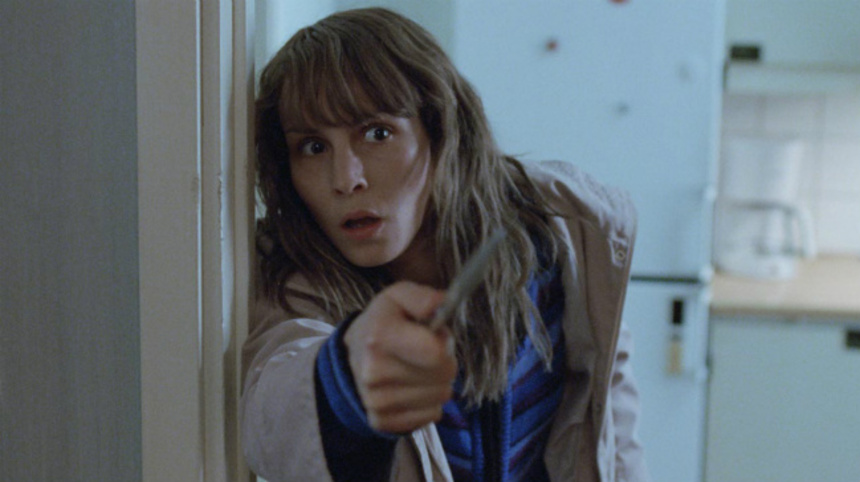 Thanks to its unfortunate title and the fact that its marketed as a straight-forward thriller, you'd be forgiven for thinking that Babycall is simply a Rear Window knockoff with baby monitors -- the film that Noomi Rapace will disown in interviews after Prometheus makes her a huge star in the U.S. However, it's far more intriguing, effective and ambitious than anything of that sort, and ultimately, because of how good parts of it are, it's a bit more disappointing too.

Here's the high concept pitch: A woman buys a baby monitor (that's  "babycall" in Norwegian) and discovers that it receives snippets of transmissions from another apartment using the same model of device. Those transmissions mostly consist of someone screaming in terror and begging for their life. It turns out though that this hook is just one component of a rich, multi-layered study in fear. And in terms of evoking fear and anxiety, of actually placing the viewers within the frantic head space of the protagonist, Babycall succeeds on a level that few films ever reach. It is, for the most part, a nerve-racking experience. Rapace's pitch-perfect performance as the tortured protagonist certainly contributes to the unease, but credit should also be given to Director Pål Sletaune (Next Door, You Really Got Me), who wisely keeps the visual style sparse and restrained, trusting the actors and the imagination of the audience to fill in the gaps.

When the film begins, Anna (Rapace) is already living in constant fear. She and her child Anders move into a new apartment in order to hide from her abusive ex-husband. We don't get details about what exactly her husband did or who he is, but judging from Anna's insistence on always remaining close to her child (to the point of not wanting him to go to school), her insomnia, and the obsessive way she locks doors and closes curtains, it seems like he is probably a cross between Ted Bundy and a T-1000.

Hoping to keep tabs on her child at night too, she buys a baby monitor. But alas, that purchase only adds to poor Anna's stress, and soon she's got a mystery to solve on top of everything else -- Which neighbor has the other baby monitor and what sort of sinister things are they up to?

However, for almost two-thirds of the movie, the suspense comes not so much because of the baby-monitor of doom, but because Sletaune and Rapace immerse the audience so fully in Anna's tortured psyche. After the first ten minutes, it no longer matters which fears are plausible and which aren't -- we're now seeing the world through Anna's eyes, where Anders is in danger every time he's out of sight and every knock at the door signals potential doom. This is quite a feat to pull off, and while recent films like Martha Marcy May Marlene and Take Shelter have done an admirable job evoking similar feelings, neither one hit as directly or as deep as Babycall. At least, for me. Your mileage here obviously, will vary.

As the story progresses, Anna begins to develop a relationship with Helge (Kristoffer Joner), the kind electronics salesman who sells her the monitor. This story may sound like a silly or cliché idea on paper, but thanks to excellent acting by both parties as well as sparse, realistic dialogue, their interactions feel organic. In fact, this friendship ultimately provides some much-needed sweetness in a film that is otherwise a total downer.

But wait a second -- Those are some pretty hefty and disparate plot lines to cram together into one average-length thriller! Fortunately, Sletaune weaves them all together in a way that never drags or feels episodic. But I can't tell you exactly how... and here's where the review gets tricky.

It is at least safe to say that everything is not what it seems. This is not a spoiler because: a) this is a still a thriller, so duh, and b) Sletaune drops a number of hints to this effect fairly early in the film. The problem is that by the time the film reaches its final reveal, its hard not to feel a bit disappointed and cheated. In this case, I kinda wished a little more was as it seemed.

To be fair, the surprises here are more honest than many movies of this type, but as the twists add up, the emotional connection that Sletaune established so masterfully between audience and character begins to dissolve and suddenly the movie begins to feel like one we've seen before, with a few minor variations. It's not a total deal-breaker, but it's certainly a let down after such fine work by both actors to create interesting, empathetic characters and such a foreboding mood. I would have been far more interested to spend more time in their world, bleak as it may be, than to have the rug pulled out from under me yet again.

The film is still certainly worthwhile, if only for the haunting impression the first hour leaves. Also, Rapace completely owns this movie and proves not only that she's a great actress, but also that she has considerable range. So yes, one more reason to be excited about Prometheus.

Babycall is now playing in theaters in France and is available in the UK on DVD.