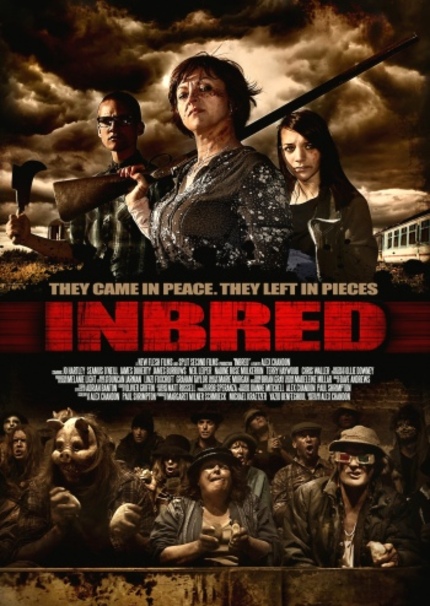 (In one sentence: it's a freakshow slaughter contest between hoodies and hillbillies...)

Over the years the focus of the Imagine Film Festival Amsterdam has shifted somewhat. When it started decades ago it was primarily a horror festival, with science fiction and fantasy creeping in on occasion. That has changed with the current program being much wider than just a few genres, and the festival's name has changed to accommodate that shift.

But Alex Chandon's "Inbred" would have fitted in this festival from day one. A low-budget rural horror film with too much gore and references to ever be called "mainstream", it seems to be tailor-made for festivals like these.

Is it any good though? Well, it is certainly skillfully done but you need a certain taste to appreciate this.

Four juvenile delinquents and their two care workers arrive in a small English village to patch up an old manor as part of their rehabilitation. The rather unique-looking locals are suspicious towards "the outsiders" but the situation seems manageably uncomfortable rather than volatile.

That quickly changes after a bad accident. When the rural inbreds decide to make the outsiders disappear (preferably in an entertaining way, if possible), the trip to the countryside turns into a gory fight for survival.

One thing to be sure of from the start is this: "Inbred" is a sick film. It is very well-made and very well-acted, there is a strong undercurrent of satire and pitchblack humor, but it is also incredibly mean-spirited and shows its nasty violence with a disturbing glee.

Director Alex Chandon was present at the film's showing at the Imagine Film Festival in Amsterdam and stated during the Q&A that he hoped we did not experience the film as torture-porn, because he himself hated torture-porn. Well... you can quibble over the definition of the term but I would say that at least two (and probably three) deaths in the film can easily be called torture-porn because we see someone first being immobilized and then tortured to death at leisure, the horror fully relying upon the victim's humiliation, pain and anguish.

However, "Inbred" cannot easily be written off as a sickie quickie as it's far too well-made for that. The long buildup to the first killing establishes most of the characters without any bloodshed involved and it speaks volumes that this part of the film is not boring at all. Instead it is funny and sometimes even deliciously wicked, and especially the two coaches and their "treatment" of their young wards are good for laughs and plenty of satire. 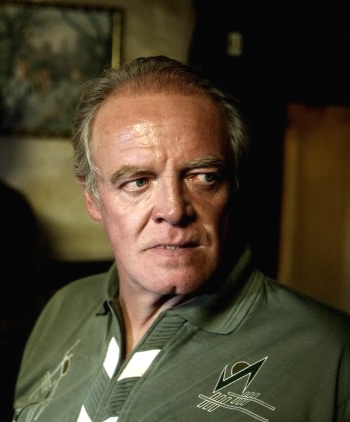 But when the horror does start no punches are pulled and the camera positively revels in showing the violent debauchery that takes place. Gorehounds will be fully satisfied by this film and a few shots will have everyone wonder how they were done, especially since the vast majority of the gore effects were practical. Cgi was used but mostly just for compositing shots and things like wire-removal. Is this becoming a trend, by the way? I sure do hope so. The violence gets funnily over-the-top only two or three times, with the rest of it staying disturbingly close to reality. Brrrrr...

Yet where the film really shines is in the characters. Both Jo Hartley and James Doherty who play the two coaches do very good work here but the winner undoubtedly is Seamus O'Neill as the local pub owner, seen on both sides of the conflict in the film, who is worth the price of admission all by himself. His character has to be seen to be believed and keeps being entertaining till the very end. The rest of the cast is fine as well and do a believable send-up of their carefully stereotyped roles.
Because Alex Chandon is obviously fully aware of every cliché he's put in "Inbred" and carefully uses them as pitfalls to play with the audience's expectations. There are also innumerable shout-outs to similar "deadly yokel" films and other well-known horror references but it never hurts the narrative, nor does it give the film an annoying implied cleverness. If Alex' aim is to just unsettle, amuse and surprise he succeeds several times, at least with me.
And now I need to go wash my eyeballs.

Awfully mean-spirited and often sickeningly gory, I would normally never recommend the likes of "Inbred". But the technical virtues of filmmaking on display here, coupled with a roster of well-played incredible characters, go far in redeeming the film.
So if you have the stomach for it I do urge you to check this out. Call it cautiously recommended...

The Amsterdam audiences (known for often being a raucous bunch of gorehounds themselves) awarded the film a 7.6 out of 10. 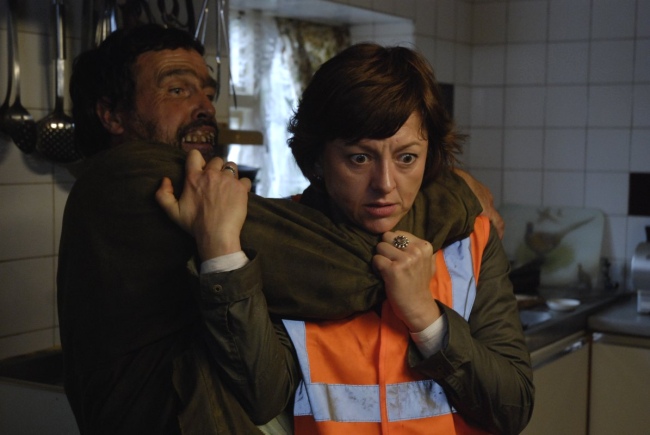