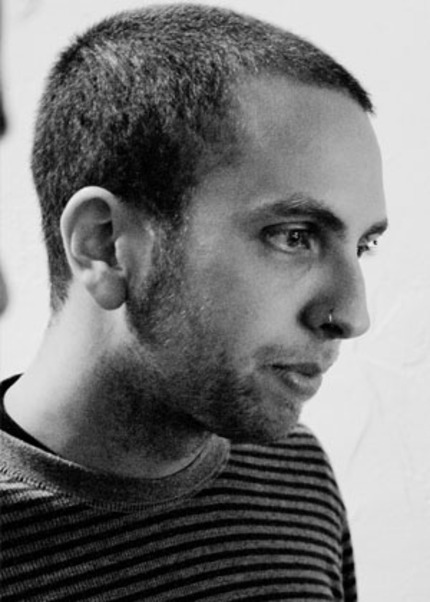 Antiviral marks the feature debut of the scion of one of the world's most esteemed genre filmmakers. The film will be competing as part of the Un Certain Regard series, an immesely prestigious honor for this young filmmaker.

Brandon Cronenberg's name has actually appeared already on a film screened on the Croisette, appearing in the credits of his father's delightfully macabre short film At the Suicide of the Last Jew in the World. Of course, this will be the first time that Brandon will be there with a film under his own name.

Here's the official summary of Antiviral:

Syd March is an employee at a clinic that sells injections of live viruses harvested from sick celebrities to obsessed fans. Biological communion - for a price. Syd also supplies illegal samples of these viruses to piracy groups, smuggling them from the clinic in his own body. When he becomes infected with the disease that kills super sensation Hannah Geist, Syd becomes a target for collectors and rabid fans. He must unravel the mystery surrounding her death before he suffers the same fate.

I sat with Brandon at his edit suite at the top of a building just blocks away from where another Canadian father/son directing dynasty, the Reitmans, helped build the headquarters for the Toronto Film Festival. He's quiet, giggly, and somewhat reticent, unpracticed yet at the art of taking control of an interview and running with detailed answers. He appeared laid back yet attentive, aware of the pressure cooker he's about to step into, but seemingly at ease far more than he probably should be given what's about to transpire in the madhouse that is the South of France .

Brandon and I talked while we watched a couple clips from the film: One showed a stark, white room, almost Kubrickian in its sterility, as clients gather to choose which celebrity's disease to be injected with. Douglas Smith, the curly-haired kid from Big Love, sits in front of the protagonist Syd, played to creepy effect by Caleb Landry Jones (X-Men: First Class). Caleb's freckled face and slicked back hair is shot in a way to make him look positively diabolical, with the stark, overexposed cinematography by Karim Hussain (Hobo With a Shotgun) emphasizing the red of his features against the ghostly pallour of his skin.

This contrast is echoed in a later scene, where we see some sort of issue with a procedure, Syd vomiting blood on a pristine white floor. Clear colour coding, retrained performances and a thick, analogue-synth based score, what's not to like?

The dialogue is slow and deliberate, almost sleepy in its delivery. From what I saw the film looks highly stylized and maybe a bit over earnest, but it's near impossible to fully apprehend from only 8 minutes of disparate clips.

I wasn't allowed to see any shots of Malcolm McDowell, but I did notice that the clinic where celebrity worshipers congregate is called named "Lucas" (*nudge nudge*), which has to count for something. 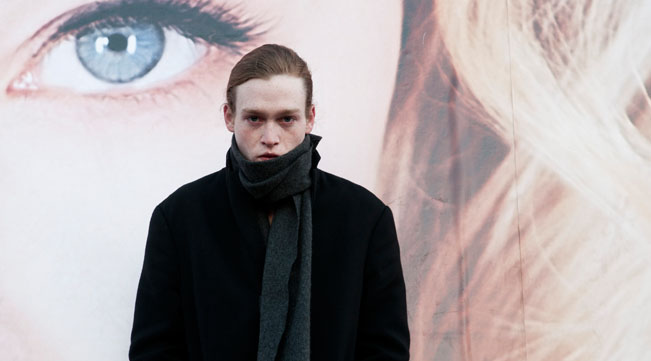 I happened to have been at Cannes when your dad played CRASH. I assume Antiviral isn't going to generate quite the same level of angst?

Yeah, it's probably not going to be that controversial.

So, based on the summary, this sounds like a high concept romantic comedy, like we've come to expect with the name Cronenberg

You know what, I keep saying it's a romantic comedy, and it is, but everyone things I'm joking!

It's more a romantic comedy than anything else, actually.

There's obviously pent-up expectations given your the echoes your name has at this festival. Even your dad suffers from it, he makes amazing films and they're somehow not "Cronenberg-y" enough for some. In some ways, this is your coming out party, your Sweet Sixteen as it were...

I haven't dealt with the expectations at all, I thought it would be a lot weirder. I thought people were going to be extremely hostile for some reason, I had assumed that would be the appropriate response.

Everyone's been pretty cool and positive about it. I keep being told I should be extremely nervous, because of my Dad and expectations, that there's a huge amount of pressure on me because of him. I guess I stopped caring about that.

As well you should. I mean, fundamentally we're Canadian. It doesn't have the same weird, pent-up expectations as if your name was, say, Jimmy Kubrick or Janette Scorsese

We're watching these clips on the same type of television that's shown in the film. This must be bit surreal

We were thinking that the entire time through editing. I think at one point we watched on the exact same TV.

Fantastic casting of Caleb, such a great look. He's got those weird Jar-Jar arms...

Those freckles are spectacular!

Can you talk about the music?

Yeah! [Laughs] He has this friend who has this huge bank of analogue synths, so they just played with them and created...this.

Was this all shot in Toronto?

Mostly Hamilton, actually [ed. about an hour West of Toronto, around the lake]. Mostly locations, some studio space in Toronto.

The shot where there's blood all over the wall - How much of a pain in the ass was doing take two?

Actually there wasn't a take two for that exact reason. When someone gives you the perfect blood mustache, accept it.

How much has the film changed from your initial conception to the final product?

I started writing the film back in 2004. I think there were 32 different slightly revised versions of it. Obviously it changes a lot during the production of it, and during the editing.

Are there films you wanted to echo, or even those you'd want to avoid echoing?

Nothing I was aiming for specifically. I wasn't thinking about other films too much. It's been fun!

So basically you get to go down to the South of France, screen your film, and have a whole bunch of French people yell at you

That's basically it. It's about being antagonized by the French.

I've been to Nice, but never been to the Festival.

Somebody told me there's a major hairdresser convention that comes in afterwards. It sounds insane.

What's the plan for after Cannes?

It will be distributed, hopefully it will play TIFF. I don't totally know what's locked down at this point.

You watched that? Yeah, that was a bit of a mistake.

Any collaborators you want to highlight?

Oh, man, I could name a tonne of them. Karim Hussain and Rob Cotterill, first assistant director, they both worked on Hobo With a Shotgun. And editor Matthew Hannam (The Entitled), these guys went far beyond the call. Before we were officially into it we spent a lot of time working together, and sorting it out.

And how did you all hook up?

I went to Ryerson Film school with Kevin Krikst, he finished before I did and started working for them. They have this thing called the First Time Filmmakers Initiative, where they're making debut features from primarily Canadian filmmakers who they find interesting. I had made my end of year short at Ryerson which was based on a scene from the script for Antiviral, and Kevin saw it, and thought it'd be a fit for this program. He introduced me to (producer) Niv Fischman, and I got connected.

This is actually the third film in this series, the first was Hobo, the second was (Analeine Cal y Mayor's) The Boy Who Smelled of Fish.

It's really interesting because Rhombus is offering a ludicrous amount of support to a series of first time filmmakers, it's an ongoing project which is great.

And the grand plan is to sit back ten years from now and supporting young filmmakers yourself?

Yeah, I guess. Or I'll be crushing them. Setting up a film mafia of some kind, putting hits out on people to make sure that young filmmakers can't compete with me.

No ambitions yet to move to LA and buy a house with a pool?

I would hate to live in LA. I'm pretty attached to Toronto.

Have an incredible time there!

Thanks. Sometime, a few months from now, this all will sink in.

Jason Gorber is not going to Cannes this year, and is mildly bitter about this fact.