TIFF 2012 Review: ANTIVIRAL is Imaginative and Often Clever, But Not Mind-Blowing 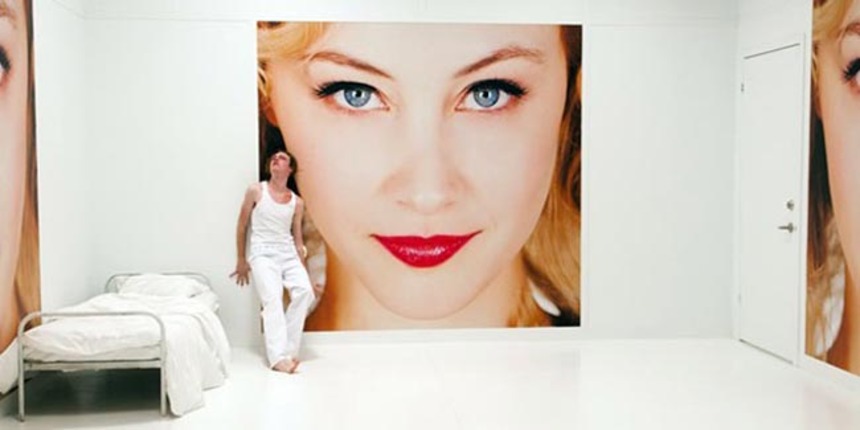 As a stomach-churning, jet-black satire of modern culture, Brandon Cronenberg's Antiviral is a resounding success, and is directed with precision and conviction. However, for these very reasons, it's also cold, sterile and mostly void of humanity or even emotion. It's possible that the latter characteristics should be counted in the film's favor too though, since they are clearly part of Cronenberg's intention, but that doesn't mean everyone's going to actually enjoy watching the thing.

Just to get this out of the way: Yes, Brandon is David's son, and yes, it's nearly impossible to ignore that Antiviral occasionally echoes films like Videodrome, eXistenZ and The Brood both visually and conceptually. But Cronenberg Jr. also definitively establishes his own directorial voice, so no more dad comparisons for the rest of the review.

The somewhat convoluted sci-fi story-backdrop is set up with with impressive narrative economy. Basically, society has become so obsessed with celebrities that companies have started banking off of buying blood samples from mega-stars and infecting customers with the same diseases. This practice apparently makes fans feel even closer to the stars they adore. It's an inspired idea in a satirical sense, but it also takes a bit of a leap to get on board with the concept as a plausible dystopian scenario. Culture's obsession with celebrities has indeed grown by leaps and bounds in the last five years, but, to the best of my knowledge, most people still hate diseases. This attitude has not changed in a long time.

But let's give it a pass -- Cronenberg does a very nice job laying out the logic and process behind this world, and at the very least, it's a funny idea. Now then, Syd March works at one of these companies, but he's also erasing the copyright data of the celebrity-viruses his company owns rights to and then selling the viruses to black market distributors. Naturally, this gets him into trouble, both because that's illegal, and also because, in order to steal the viruses, he must first inject them into himself.

Thus begins a scathing, Philip K. Dick-type plunge into a film noir rabbit hole. Or perhaps we should say film blanche; (Sorry.) the entire movie looks like it was shot in a doctor's office, with sets consisting mostly of bright lights and white backgrounds. The precise editing and shot-composition also add to the feeling of complete sterilization. Visually, it makes 2001: A Space Odyssey look like Jean-Luc Godard film.

Rest assured though, the clean white surfaces will be stained dark-red by the end of the film. In fact, Cronenberg's obsession with rubbing our faces in painful medical procedures and virus symptoms borders on fetish, and is perhaps the most refreshingly unhinged aspect of the film. Anytime someone gets injected with a needle or a piece of skin removed (or worse), you'll be seeing it in extreme close-up.

The performances and dialogue reinforce the cold, detached vibe too, with characters only departing from monosyllabic mumbling when they are in immense pain or making some sort of pointed commentary about society. Caleb Landry Jones works extremely well to this end playing March. His only expressions throughout the movie are disgust, indifference and sometimes pain.

And yet, there's something strangely compelling about the intensity of the eyes, or perhaps just the sheer amount of time he can maintain a piercing glare. Also, as he becomes more and more sick in the movie, the performance becomes intentionally hilarious and dead-pan.

The other actors (including Malcom McDowell in a small part) are equally well-cast and occasionally get to have a bit more fun than Jones. That said, if you need to have even a little bit of empathy for a film's characters to enjoy watching it, this probably isn't the movie for you.

The aims of Cronenberg's approach to the material are obvious, and while some will argue that he took the task of creating a soulless emotional void of a future a bit too seriously, I admired the film's conviction, including its reluctance to pander to the audience with pop-culture winks, or even cast any known actors in large roles. The ideas here are imaginative and often clever, but never actually mind-blowing, like the best work in this genre. And while there's zero-time spent worrying about what's going to happen to the characters, there is a fair amount of time spent wondering, and Cronenberg's got a few great pay-offs up his sleeve in this department. It's a strong debut, and one which does indeed feel like the director accomplished exactly what he set out to do. Now I'm interested to see what happens the young Cronenberg loses control and lets himself go a little more.

(Review originally published in connection with the film's debut at the Cannes Film Festival in May 2012.)