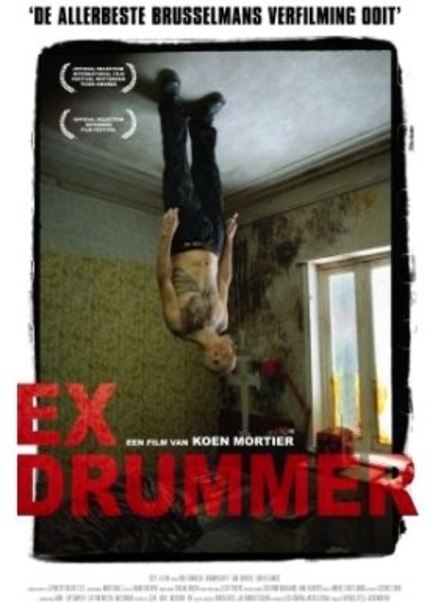 With Ex Drummer, Koen Mortier (22 Mei) followed the path that Tom Barman's Any Way The Wind Blows cleared a couple of years earlier. Mortier merely confirmed it was possible to make challenging, unique films in Flanders, films that holds international appeal and aren't just local products build on the national fame of some or other second-rate actor. Ex Drummer is not for the faint of heart, but if you possess a very dark sense of humor this is definitely one of the best comedies you will encounter.

The DVD cover links this film to Trainspotting, and while I can appreciate the similarities between both movies you need a much darker and nihilistic sense of humor to sit through Mortier's masterpiece. Ex Drummer descends to the dazzling depths of the Flemish backwards societies, dragging up some terrible lowlifes and near-human monsters who are heading straight for their inevitable doom. In that sense Ex Drummer has much closer ties to that other Belgian cultfilm, C'est Arrivée Pres De Chez Vous.

The film follows the a famous Belgian writer (Dries) who is approached by three slightly handicapped individuals. The three are aiming to form a rock band, but they miss one of member to play the drums. In order to experience their dreary existence from up close, Dries accepts the challenge, fully aware that they only want him for his existing record of fame.

And so he teams up with Koen de Geyter (hates women, walks on the ceiling when he's at home), Jan Verbeek (gay and lives with his retarded parents) and Ivan Van Dorpe (near-deaf and neglects his wife and young daughter). The band only aims to perform once at a local competition, but in order to produce something that resembles music they do need a few repetitions to straighten everything out. As the competition draws near, Dries sinks deeper and deeper into the world of his companions and finds it more and more difficult to neglect their doomed fate.
The un-beauty of Ex Drummer may be hard to capture in simple screenshots, but the film is definitely a looker. Mortier (coming from an advertising background) has plenty of tricks up his sleeve and applies them shamelessly to paint a dark and grim, almost underground-like world. There really is no room for beauty here, the setting is dirty, vile and rotten, including the characters themselves. Stand-out scenes are those where one of the characters walks onto the ceiling (while the others are just standing with him in the same room), the backwards intro and the bloody climax.

The soundtrack really fits in quite well. While far from my favorite type of music, Mortier fills his soundtrack with gritty rock tracks, dominated by heavy guitars, untimely drummers and people who shout loudly in microphones. There is no room for subtlety, no room for beauty here either, but it's hard to contest that the music is anything but unfitting for the atmosphere the film upholds. There is just something immensely funny about the four guys trying to adapt Devo's Mongoloid. Talk about a match made in heaven.

As for the acting, all actors do a terrific job, there really is no weak link amongst the extensive cast. But there's one aspect that really deserves most of the credit. People who aren't used to hearing Dutch may not catch on, but the dialect in Ex Drummer is so fabulously hideous that it actually defines part of the movie. Even for native Dutch speakers it's almost impossible to understand (I had to watch the film using subtitles), at the same time it's such a wonderful dialect (and not quite unlike the Scottish dialect heard in Trainspotting). It adds a level of realness that's hard to accomplish any other way. That said, lots of praise for the actors who do give their all and form a group of admirable retards and lowlifes.

Ex Drummer is an adaptation of a book originally written by Herman Brusselmans, one of our national treasures when it comes to literature. His particular style of writing translates horribly to other languages I'm afraid, which is why Mortier's film is such a success. While capturing the literary beauty of Brusselmans' writing style, the film transcends its source and makes it more accessible to an international audience. That is, if you can get yourself to appreciate the peculiar sense of humor.

Together with Small Gods, Dirty Mind, 22 Mei and Any Way The Wind Blows, Ex Drummer marks the top of Flemish cinema. It's a raunchy, mean and devilish son of bitch, but at the same time it's a smart, funny and unique little film which deserves a loving cult following. Mortier is clearly showing off, but does so with plenty of style. Do not bring your family along when watching this one, but enjoy it in the company of your own dark, perverse mind. Only then will you be able to laugh out loud at all the nastiness on display.