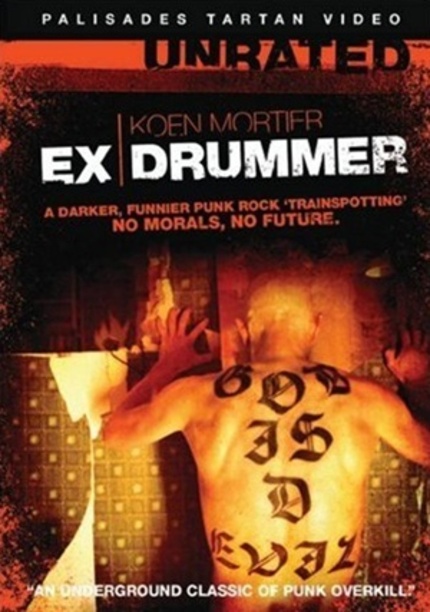 America has had to wait a long, long time for Koen Mortier's Ex Drummer. One of the most potent debut films I have ever come across - you can read my review here - the picture deserves all the Trainspotting comparisons, though this is grittier stuff by far. After becoming a buzz film at the Toronto International Film Festival and being picked up for release by Tartan the film itself and director Koen Mortier appeared headed for cult stardom but those plans all fell apart when Tartan collapsed before releasing it and sent the film off into contractual limbo. Though it did receive an R1 release in Canada, that version was pretty bare bones and scarcely publicized at all.

Well, US fans, the newly reorganized Tartan is up and running, treating their films a whole lot better than the old Tartan did and they have just put out the most feature-rich edition of the film yet to appear in any English territory.

The transfer of the film itself looks great and the picture has lost none of its potency in the years since it was created. In the feature set are three music videos from bands involved in the film, two different trailers and an extended - and frequently hilarious - Making Of piece that begins with director Mortier reading multiple rejection letters from Belgian funding bodies who wrote the film off as vulgar and pointless. On the vulgar front I agree wholeheartedly, but pointless? Not by a long shot.