Weinberg Reviews WRATH OF THE TITANS 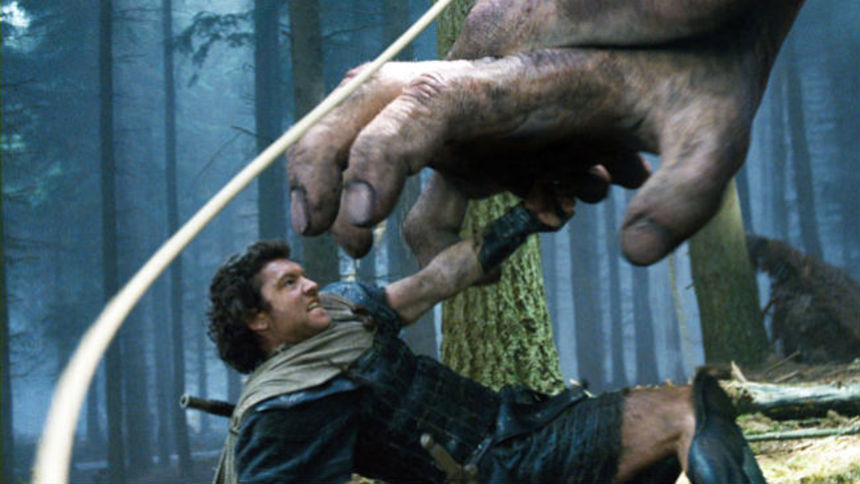 We've become very advanced in how we watch movies. We know all about the technical angles, the budgetary concerns, the tracking, the box office numbers, the 3-D gimmick, and all the rest ... I think we've become a little too demanding in some respects.

Take, for example, the good old-fashioned "adventure quest" movie. Now that the Lord of the Rings series has given us a "gold standard" benchmark by which to compare similar adventure films, we seem to be a bit snobbish. Last year, for example, I had a reasonably good time with the highly-touted Conan the Barbarian remake, but I was pretty much alone on that front. Go back another year and we got the flashy, pulpy, silly re-imagining of Clash of the Titans, which (maybe I'm losing my edge) I also had some good fun with.

Which brings us to Wrath of the Titans, a sequel to a remake of a movie that was little more than a colorful hodge-podge of various Greek myths and legends. That 1981 cult favorite is, let's be honest, pretty much awash in stagy acting, choppy editing, and thinly-drawn characters -- and yet still we love Clash '81 a whole lot. Nostalgia is a powerful thing, doubly so when it's presented with practical visual effects that are really quite amazing.

I maintained that the Clash remake had the same problems as the 1981 version, and, all things being relative, I'm pleased to opine that the certifiably wacky Wrath of the Titans represents a lot of what I want from an adventure movie: a fast pace, a handful of eclectic / weird / violent characters, and an action sequence every 10 or 12 minutes. For all its obvious flaws, Wrath of the Titans delivers the goods. Maybe this type of movie just flashes me back to the early 1980s, but it's also easy to forgive goofy dialogue and wooden acting when a movie is working its ass off in other departments.

Wrath of the Titans is nothing more than an A to B to C "quest" story, and at each stop along the way from a dingy fishing village to the deepest pits of Hades, our hero Perseus finds another sidekick, villain, or lunatic booby trap to deal with. When the screenwriters (and the poor editor) are forced to focus on the actual narrative, Wrath of the Titans gets more than a little silly or dry, but to its sincere credit, the movie is fully intent on giving youthful action fans a big batch of kinetic mayhem in exchange for their ten bucks. Grown-ups will enjoy the dramatic histrionics of Liam Neeson, Ralph Fiennes, Bill Nighy, and Danny Huston; the young ladies will undoubtedly sigh over the square jaw and muscular arms of lead sword-swinger Sam Worthington; the young-at-heart will look past the (frankly worthless) 3-D presentation and just focus on all the creatures, battles, chases, and escapes. For a film that barely engages the brain at all, it works pretty damn well for the ears and eyeballs.

Mythology purists may have three strokes while trying to figure out how many legends have been wedged into the over-stuffed Wrath screenplay, but if you're looking to a Hollywood movie to stay loyal to the "true" Greek mythologies, well, you should probably give up on that by now. This time around Perseus has to contend with a Minotaur, the God of War, AND the immortal Titan Cronos himself, not to mention giant cyclopses and crazy-ass dual-torsoed hell warriors, and while there's never any actual suspense to the proceedings, there's a nice sense of scope and specificity to the creatures that helps to maintain the essential matinee vibe.

Whether it's because Wrath is not a remake, or because we have a new director this time around, there seems to be a playful looseness to Wrath of the Titans that makes its other shortcomings a bit easier to swallow. It's a dumb, obvious, simplistic quest movie that earns extra credit for energy, enthusiasm, and massive-scale "epicosity."

Wrath of the Titans opens wide acros the U.S. and Canada on Friday, March 30.

More about Wrath Of The Titans