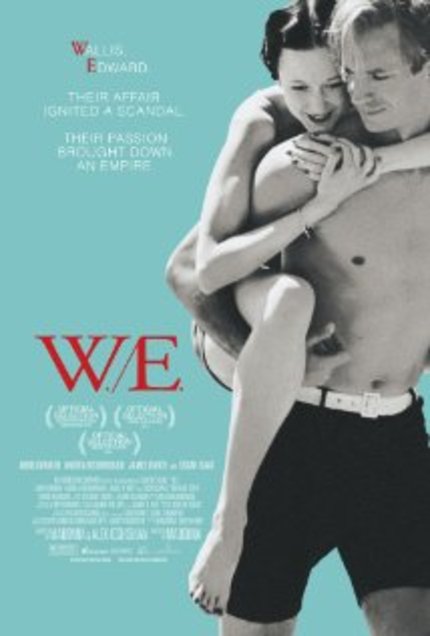 When they first coined the notion of auteur theory fifty or so years ago, no one, of course, had Madonna-as-filmmaker in mind. But, being that auteurism is to view the director at center of all things within a given film, this global pop superstar-turned-director can't help but strut her stuff as the embodiment of the theory pushed to its most narcissistic ends. On the surface, "W.E." tells the tale of the torrid, throne-abdicating romance of King Edward VIII (James D'Arcy) and American divorcée Wallis Simpson (Andrea Riseborough). But observing that aspect will only get the viewer so far with "W.E." (That's, "Wallis & Edward". Apparently W.E. is what the true-life couple wrote on things back in their googoo-eyed days of early love). This one is all about the diva/auteur, airing passionate appeals for sympathy and understanding.

Of course, it's easy to say that; in light of the fact that after nearly thirty years of constant publicity mongering on her own behalf, EVERYONE knows who Madonna is, fan or not. Now that she's momentarily put the coned bra, S&M backup dancers, children's books, and sex books aside in favor of a movie camera, it's only natural to run her film through the Madonna filter. Whether she's actually any more cinematically narcissistic than your average brand name auteur, I can't truly say, but I do know this - odds are her film is not as good as theirs.

That's not to say "W.E." is an unmitigated disaster. I was actually relatively on board for the first half or so. Many critics of the film have dismissed it as a mere exercise in opulent spending. Costumes! Tchotchkes! Set dressing! Fancy meals! All fit for a king! (Make that a former king.) And while there is that legitimate aspect to "W.E.", it cannot be overlooked that Madonna is actually trying to say something here. How well it's said and whether it's worth being heard are different points, but we can't say it's not art just because we might not take the artist seriously when she's at her day job.

With the historically-documented throne-abdicating love at the center of this pre-WWII era drama, one may assume that this film is the logical flip side of 2010's "The King's Speech", which chronicled the trials and tribulations of Edward's brother Bertie. Indeed, Bertie and his wife do feature briefly in "W.E.", and no more favorably than Edward and Wallis were depicted in "The King's Speech". (The Weinstein Company, by the way, distributes both films. Fair and balanced!)

But actually, a far more apt pairing would be with Sofia Coppola's "Marie Antoinette". Both "W.E." and that film are spare-no-expense historical dramas made by women of privilege as a personal cry for understanding. Unapologetically nestled on the wrong sides of history, they play out their own poor-little-rich-girl woes by playing fancy dress-up through the lens of famously reviled but now thoroughly humanized women of power. The big difference is that Sofia got away with it, as talented a filmmaker as she is. For Madonna, Wallis Simpson ONLY matters because she can relate to her situation, her predicament so strongly. A worthy subject of herself.  And so, the auteur's gone wild, as Madonna then unintentionally re-dehumanizes her heroine, even as soon as she's going to the difficulty of humanizing her for perhaps the first time.

There is a heavy-handed, time-consuming modern-day (well, 1998) framework to the Wallis + Edward story involving a young woman (Abbie Cornish), herself trapped in an unhappy upper-crust marriage. She prowls a Sotheby's auction house exhibit of the Duke & Duchess' former belongings, triggering psychic sense memories that again and again detail how, although Edward may've given up the throne for love, Wallis gave up a lot, too. (Her privacy, her identity, her reputation.) But Wallis was also a free spirit who could show those dull royals how to cut loose! Like Coppola's "Marie Antoinette", Madonna's Simpson needle-drops anachronistic music in order to generate anarchic excitement in the castle. The song choice is almost jaw-droppingly alarming; so wrong that it's almost right. I won't spoil it, although I will say that Madonna's waiting until the halfway point in the film to pull a stunt like that is simply waiting too long, and thus is a big fat disconnect.

Madonna's gone on record saying that during her time in England as wife of director Guy Ritchie, she often felt like Wallis Simpson, ostracized and unhappy. If her ex-husband ever decides to release a pop album, may it be a more solid effort than this, her second film as director. What Ritchie's kinetically charged work may lack in human soul and passion, Madonna is haphazardly wallowing in, neck-deep. But even two films into his career, Ritchie did kinetic better than Madonna is doing passionate. (Although if pressed, I'd probably re-watch "W.E." over "Sherlock Holmes: Game of Shadows".) Anyhow, you can't miss the point if you tried: Heavy is the auteur head that wears the pop star crown.