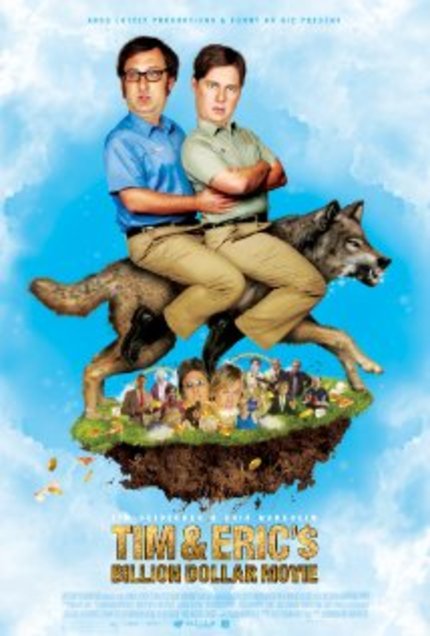 Having never seen the comedic TV work of Tim Heidecker and Eric Wareheim ("Tim & Eric Awesome Show, Great Job!"), I went into their feature-length variation, "Tim and Eric's Billion Dollar Movie", braced for a merciless expansion of inside jokes that I would be terminally outside of. Mercifully, I was able to navigate these strange waters successfully enough to understand and even enjoy the film, even as it came apart in places. Aesthetically speaking, it's got about as much going for it as an early Kevin Smith film. Comically speaking, it's a downhill ride that starts out promising but then fizzles out.
Heidecker and Wareheim play fictionalized versions of themselves, occasionally wandering beyond the forth wall to further muddy the meta-waters. The laughs are the most solid in terms of the plot itself. When "Tim & Eric's Billion Dollar Movie" opens, we come to learn that that's exactly what Tim & Eric have made - a movie, with a billion dollar budget. And it sucks in every possible way. Because they are morons, in every possible way. And the Hollywood execs who green lit their billion-dollar movie are bigger morons for letting it happen. They want their billion dollars back, but having pissed it all away on flamboyant houses, clothing, and a guru/mooch played by Zach Galifianakis, they have no choice but to take a job reviving the world's deadest shopping mall, owned by a tyrannically delusional Will Ferrell. (And I do mean dead - the place looks like George Romero just got done shooting "Dawn of the Dead" in there four times over. It's wolf-plagued and everything!) Huh? Don't worry, it all actually makes an absurd bit of sense, and legitimate satire abounds... for a while. It's semi-intelligent fun, until Tim & Eric as actual filmmakers (as opposed to the meta ones they are portraying on screen) (which makes this whole thing ultra-confusing to write about; great job on that, Tim & Eric) lose control of the whole operation, and simply opt to let it careen, because hey, who doesn't love a wreck?

That said, there was a lot I didn't get, and I'm not talking about the graphic shrim crapping sequence or appearances by "Awesome Show, Great Job!" stock actors that brought instant chuckles to the initiated viewers. What I didn't get is why a promising comedy would willingly and irrevocably veer into the realm of the pseudo-sadistic, beyond the confines of dark humor. By taking full advantage of the freedoms of their R rating, Tim & Eric end up attempting to mine laughs by wallowing and attacking rather than through the time-tested methods of careful craft and construction. Maybe I sound like an old school curmudgeon when I say that they're taking the easy way out, as they increasingly abandon what makes their film clever as the running time wears on. I get that Tim and Eric are absurdist comedians who've made their mark by seizing upon and distorting the familiar TV tropes we take for granted. But in this movie, what begins as a sly riff on consumption, advertising, and self-obsession becomes a manufactured midnight movie; a subpar comedic Jodorowsky film (of all things).

As would-be auteurs and stars of their own big-screen ego-trip, Heidecker and Wareheim make every attempt to turn their filmmaking shortcomings (budgetary, experience, etc.) to their advantage. (It's clearly not really a billion dollar movie. Maybe not even a million.) 1980s corporate video aesthetic is embraced, and that much works. There are moments when it even looks and sounds like synth-fueled Video Toaster-generated cheese. Jeff Goldblum, Michael Gross, Robert Loggia, William Atherton, Will Forte, and Erica Durance, among others, all turn up in amusing roles. John C. Reilly indulges his shameless comedic side with a larger role as yet another moron, although he manages to steal every scene he's in. So there are redeeming qualities. But Tim & Eric's unwavering on-screen attempts to be as unlikable, despicable and morally bankrupt as the bloodthirsty Hollywood moguls they screwed over drowns everything by the end. Tim & Eric become the failed, new Butch & Sundance in a hail of ridiculous grindhouse-level violence for it's own sake and it's own sake only. This sort of thing could've been very smart and memorable, but in light of the utter lack of comedic build permeating this movie, it's just whack-a-mole sound and fury, signifying only other signifiers.

Whether this obvious attempt to forge a deliberate cult classic out of their TV program will work or not, time will tell. Hailing from Will Ferrell's Funny Or Die comedy farm, "Tim & Eric's Billion Dollar Movie" manages to both be funny and die. It's the dying that's easy, which this film proves. Even if it is funny for a while.