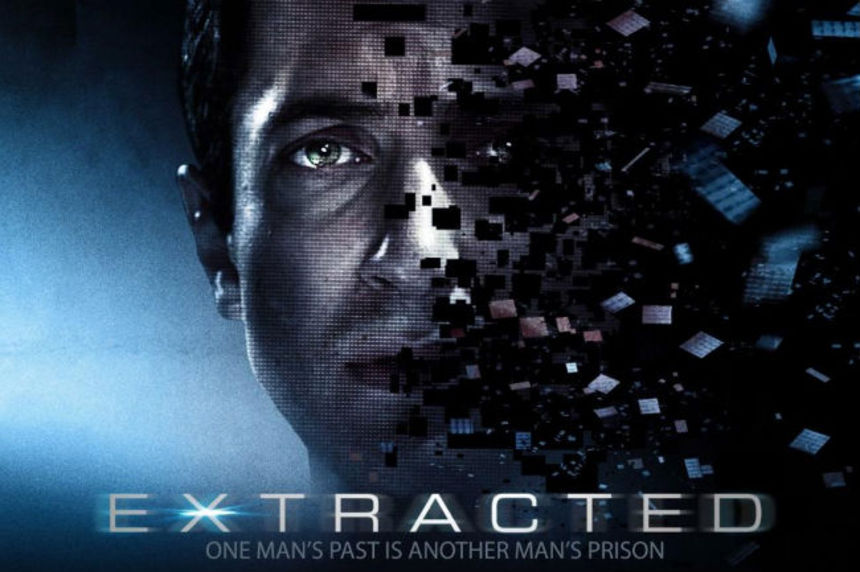 When you're an independent filmmaker with very limited funds but a pretty cool idea for a science fiction movie, you can either give up -- because who the hell makes sci-fi flicks with no money? -- or you can forge ahead, cutting corners where you can in an effort to squeeze some high-priced ideas into a budget that can barely support actual dialogue.

Fortunately we have a few brave souls who forge on regardless, which is how we get little winners like Primer, The Corridor, and Extracted. If Hollywood got a hold of this half-derivative / half-novel screenplay, they'd bulk the thing up with millions of unnecessary components, and the end result would be a January-release potboiler that's forgotten by March.

Clearly inspired by ideas found in and around Inception, Frequency, Strange Days, Minority Report, Dreamscape, and a half-dozen others, Nir Paniry's Extracted certainly sounds like a low-key mish-mash of other peoples' concepts, and to a degree it is, but the director (and his co-writers) still find a way to inject their own wrinkles and results to the mix. A viewer can either notice the obvious inspirations scattered throughout Extracted, or s/he can acknowledge the familiar bits and recognize the original stuff on its own merits.

The fractured framework deals with a well-meaning scientist -- aren't they all? -- who builds a machine that can enable someone else to enter your memory banks. Obviously the applications for this machine would be endless, but in order to get the funding he needs, Tom (a very strong Sasha Roiz) makes a bad deal. Before he knows it, his invention is being used on a convict. After a chatty and familiar, but fascinating, set-up, Tom finds himself locked deep inside the unpleasant memories of accused murderer Anthony (Dominic Bogart), while his body is left to veg out in a comatose state. On the outside we deal with Tom's wife (Jenny Mollen), Anthony's dad (Frank Ashmore), and a potentially shady business partner (Nick Jameson), but on the inside we have Tom trying, and mostly failing, to solve the murder that Anthony is accused of.

It all gets pretty complicated, but (thankfully) not too convoluted, and everything sort of makes sense in the end. Well-shot and impressively cut -- particularly for such a dense and contorted story -- Extracted suffers only in the score department. It's not that the music is bad, but that it's more than a little intrusive in a few key scenes.

It's a small blemish on an earnest indie effort that borrows a lot of nifty ideas from several brilliant sci-fi writers, while also bringing some refreshing novelty of its own to the party. Also, Richard Riehle pops up for a few scenes, and that's a nice little bonus for anyone who watches a lot of genre flicks.

Extracted enjoyed its World Premiere at SXSW on Saturday, March 10. It screens for the fourth (and last) time tonight.