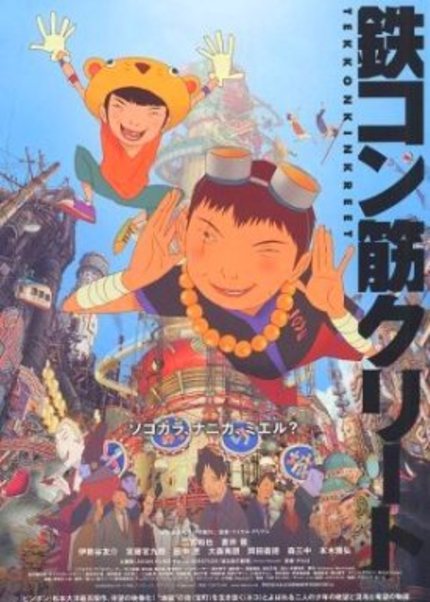 Tekon Kinkurito is without a doubt one of the most unlikely Japanese animation projects ever realized. Based on an obscure manga, helmed by an American director, conceived in the bowels of Studio 4° offices, there seemed to be no commercial motivators to get this film off the ground. And yet the result is one of the most sprawling, innovative and impressive animes out there, a definite must see for everyone with a soft spot for animation (and not just the Japanese kind).

Director Michael Arias (Heaven's Door) fought long and hard to get this film made. He started out by directing a short pilot (as part of a Studio 4° anthology project) that won him a couple of prizes, but the pilot still failed to land him the needed funds to get his full-length feature film made. It would take Arias another 6 years to finish his dream project, in the meantime earning him the (somewhat prestigious) title of first non-Japanese director to ever direct a high-profile anime feature.

Tekon Kinkurito has two different stories to tell. First there is the almost sacred bond between Kuro (Black) and Shiro (White), two young orphans that dwell the streets of Treasure Town. Then there is the battle for control over Treasure Town, a profitable part of the city that sees the police, the yakuza and even a mysterious theme park project investor fight for dominance over the area. Treasure Town is Kuro and Shiro's home turf though, and they don't plan on giving up their territory without a little fight.

While the relationship between Kuro and Shiro forms the emotional core of Tekon Kinkurito, the battle for dominance of Treasure Town is just as fascinating (if not more) to behold. All parties involved are adequately developed and they all get their moment to shine, really bringing the fight alive. There are few animation films (or, for that matter, films in general) that manage to create such an all-encompassing feel of their fantasy world, but Tekon Kinkurito succeeds wonderfully well.

Visually Tekon Kinkurito is just drop dead gorgeous. The level of detail that fills frame after frame is almost impossible to take in in one single viewing, each shot is filled to the brim with the strange yet intriguing architecture of the city. The character designs are quite unique too, though they might be more prone to divide audiences (anime adepts can expect character designs that resemble those of Windy Tales). The animation itself is smooth and impressive, the CG well concealed and integrated remarkably well. Add the superb finale and you can only conclude that Studio 4° really is one of the grandest animation houses out there, flaunting a level of originality that no other production house can match.

The soundtrack is pretty cool too. I'm not a big Plaid fan when it comes to their regular albums, but they made a pretty compelling soundtrack that aptly fleshes out the atmosphere of Tekon Kinkurito. This results in a nice, moderately electronic score that goes beyond simple background music and knows to woo when necessary. The voice acting is equally solid, there's none of that high-pitched anime yelling so prevalent in mainstream series, but adequate voice acting that bears plenty of identity.

Arias thinks big and he is not shy of a few gambles, but every single risk he takes turns out beneficial for the film as a whole. It's really amazing how Arias managed to produce such a complex, accomplished and intricate film, especially if you consider that Tekon Kinkurito is his first directorial effort. Sure enough he had a wonderful team of talents backing him up, but Arias still made it all happen. It's the ultimate testament that dedication (and talent of course) will bring you to the place you deserve to be.

Tekon Kinkurito is a film with a very authentic (Japanese) anime feel, yet it still benefits greatly from Arias' outside influences. It's superbly animated, sports a terrific score and tells a truly intriguing story. There aren't many films out there that feels as "whole" as Tekon Kinkurito does. I really hope Arias will return once more to the world of animation, but for now I'm just very grateful that he persevered so vehemently to get this film made. Tekon Kinkurito is easily one of my favorite animes and deserves all the attention it can get.