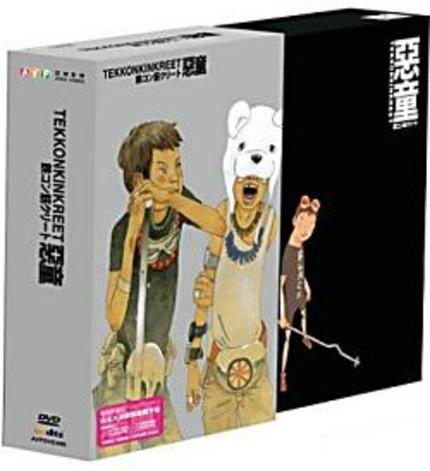 Few things brighten up my day more than receiving a gorgeous Limited edition DVD. Well, being Dutch, maybe one thing:

Produced by renowned animation studio "Studio 4° C" in 2006 and recently released on DVD in several versions worldwide, "Tekkonkinkreet" got very different reviews provided who you were listening to. People have professed disappointment at the treatment of its source material, have praised the technical craftsmanship on display in every scene, have awarded it higher than anticipated at festivals, made it lose from "Aachi & Ssipak" at another festival...

So is this misunderstood art, a flawed masterpiece, an emotionally empty tech-demo or just a mess? As always it's for each viewer to decide for himself.
And unfortunately there are two different versions as well, one more than ten minutes longer than the other, so when you pick this up take that into account.

The DVD reviewed here today is the Hong Kong Limited Edition, and the short of it is: brilliant value for money.
It's cheap, gorgeous, decent video and good sound, English-friendly with subs on the main feature, which by the way is the longer (111 minute) cut...

"Tekkonkinkreet" is based on the manga "Black and White" from Taiyō Matsumoto, which was published in the mid-nineties. Michael Arias read it and dreamt about a film version. Ten years later he actually got the chance to do so, the first non-Japanese to helm an animated motion picture for a Japanese studio.

Even more international, the script was written by Anthony Weintraub and the music comes from the English group Plaid. Unusual choices all, but people familiar with the output of Studio 4° C won't be surprised that "Tekkonkinkreet" is not a normal anime.
Anyone who has seen their excellent "Mindgame" can attest that this studio is not afraid to create to take chances, either with the techniques used or with the audiences expectations concerning art and story.

Two orphans live as homeless people on the streets of a very large metropolis, except they aren't really homeless: they consider their part of the city, called "Treasure Town", to be their home and if you threaten it in any way they'll kick your ass!

This gang-of-two consists of the mentally impaired eleven year old White and his older brother Black.
For years Black has been looking after White, pickpocketing and begging enough money to keep both of them alive, while White tries to keep Black happy. When "their" town starts to change because of some big development plans, Black and White both feel threatened, possibly sending both boys into a downward spiral of madness and violence.

But lest you think this is a futuristic play on "Grave of the Fireflies", think again! These boys are survivors, and even having to fight invading yakuza doesn't faze them. It's only when the terminator-like "aliens" show up that Black seriously starts to doubt his abilities to keep White safe for much longer...

"Tekkonkinkreet" is a term which means (after filtering it through several translations) "Reinforced Concrete". That title plays at describing the strength and resilience of the movie's protagonists, while it also foreshadows the importance of the structures surrounding them. Rarely have I seen a movie where the city is so predominantly THERE. Always sumptiously drawn, in the background, rotating and breathing around all characters, "Treasure Town" itself quickly becomes one of the players in the movie.

Reading through Michael's resumee you may think that the man is most well-known for being a producer on "The Animatrix", but actually he had already made an impact on Japanese animation several years earlier.
If you look at Ghibli's "Howl's Moving Castle" you nearly drown in the shots which have some sort of 3D changing perspective trickery going on. Backpedalling through Miyazaki's library you'll notice similar shots in "Spirited Away", notably the forest statue being passed by the family car, or Chihiro running through flowers to get to the stables where her parents live. Even further back, in "Princess Mononoke", you can see these effects being used (be it more sparsely) during several fights and chases.
Effects like these were possible due to a collection of very nifty pieces of programming which make computer graphics blend in (and look like) hand-drawn animation. And responsible for creating that software was Michael Arias.

So with this guy designing a complete city for two boys to play in, you can rest assured of the fact that it will look good. In every single shot you see things move that normally have no business moving in an animated film. As the making-of documentary shows, the city has a detailed layout which is meticulously adhered to throughout the movie. An odd by-effect of this is that you, as the viewer, start to get used to the place after a while. Subsequent showings make this feeling even stronger: consistently you sort-of know that THIS area fits over there while THAT area is on your right side, behind you. You always have a sense of place, like "Treasure Town" is a real location you visited years ago.

In contrast, the people look sloppily drawn, abstract caricatures with unusually small eyes and pancake faces. Now this is not a look which appeals to me, but as with all good animation you stop noticing the bits that bother you after a while.

This movie has basically two highlights: the description of its city and the characterization of the people within. The story itself may not be so hot, bunjeeing between common melodrama and over-the-top action sequences, but this is all offset by genuine characters. Black and White are convincingly depicted as two real children who are so strongly connected to each other that every seperation, no matter how short, hurts.
Even the comic-book villains from the beginning of the movie are gradually shown as real people, with their own worries and weaknesses.

No such kindness has been given to the aliens and their nefarious leader though, and if the film has a weakness it's that a lot of stuff eh... just happens. A lot of questions are unanswered. Do Black and White have superpowers? If so, why or how? Does that all happen in their minds only? Why do the aliens immediately pinpoint these two as their greatest threat?

In the end it turns out that Michael Arias is not interested in any of that, but more about what goes on between the players and their town. Which may leave you somewhat dissatisfied. But damn, what a town!

And any movie which describes a strip-bar as a learning experience, while showing a themepark as a cynical moneygrabbing machine scores major points of course.

Again it's a non-Ghibli movie making waves in anime world. Together with "Paprika" and "The Girl Who Leapt Through Time", "Tekkonkinkreet" has made 2006 an unusually strong year for cinema anime. Which of these three you like best is only decided by personal preference and taste.
In short: ask three people and you might get three different answers. Me, I feel privileged for having seen all three of them.
Highly recommended.

The Hong Kong Limited edition is gorgeous, and if you don't believe me check the pictures of this edition here in our forum. The cardboard double-cover houses two seperate black and white discholders, as well as two booklets and a fold-out movie poster.

The video on these discs is very good (although I guess this one will knock your socks off on BluRay with all that background detail).
Audio is not bad, with DTS 5.1 provided, although it's not exactly the most agressive track I've heard.
Subtitles are good, with the errors thankfully all on purpose to describe White's speech impediment. Disk one has no extras.

Disk two has the following:
A great 50 minute "making-of" documentary. Unfortunately there are only Chinese subtitles while Michael Arias speaks Japanese pretty fluently and never fails to do so. There are lots of interesting things on display though, like the creation of the town and the 3D staging of some of the excellent chases. The creation of one of the background drawings is beautifully shown and I'd love to own a poster of that particular piece of art (it's number 5 from above in the 13-long list of screenshots).

Next is a short item about several premieres, and some talk about the voice-acting. All in Japanese with Chinese subtitles...

The next extra is a collection of trailers, always welcome.

Finally there is a ten minute interview with Michael Arias and the two blokes who form Plaid, and this is thankfully in English. This goes into detail about the interaction between movie and music, and Michael talks about the many influences of both. Interesting stuff.

The booklets are in colour but unfortunately only in Chinese. A pity, as the pictures show in depth how many of the effects were done. I'd hesitate a bit with calling these booklets though: they're respectively 120 and 48 pages long, and a joy to rea...ehh.. look at for the images.

And I've mentioned this before, but with the normal editions in R1 and R2 doing around 20 Euro each, this pimped edition is not exactly expensive. It only cost me 23 Euro and I consider this edition cheap and worth every penny.

You can order it here at our affiliate.
Watch pictures of this edition here in our forum.
Kurt's Fantasia Review of Tekkon Kinkreet.