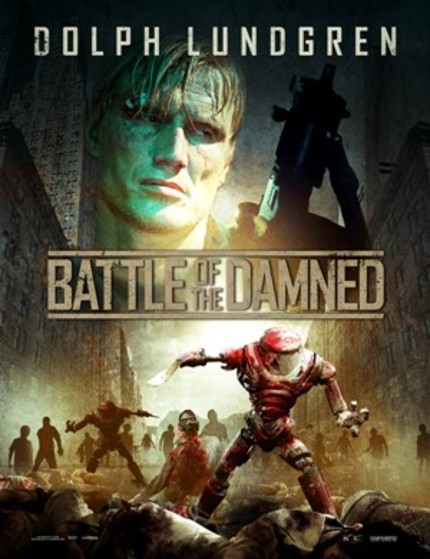 Sure, sure ... Michael Bay may be producing a big budget adaptation of Ashley Wood's Zombies Versus Robots but why wait until 2013 for that (maybe, it still doesn't have a director attached) when you can have Dolph Lundgren in Christopher Hatton's Battle Of The Damned instead?

Backed by Singapore's Boku Films and Bleiberg Entertainment's genre label Compound B, we first brought word of the action / horror / scifi hybrid that will feature zombies and robots in whatever the equivalent of mortal combat would be for things that are already dead and things that were never alive in the first place back in October. Things have been relatively quiet since as the project proceeds through development but now there's brand new artwork for the project featuring the unimpressed face of everyone's favorite Swedish Expendable. "Undead? Bah. You should see Stockholm in the middle of winter once the SAD sets in. This is nothing."

On the outskirts of civilization, a remote test facility lays ruin following a catastrophic security breach. All that remains is a handful of survivors, their small armory of weapons, and a fleet of the infected. The breach lead to a viral outbreak that left hundreds dead or mutated. Now the infected walk the land, stalking the few that stayed alive.

Led by private military operative Max Gatling (Dolph Lundgren, "The Expendables," "Universal Soldier"), our heroes have learned to fight against the infected, in hopes that rescue will soon come from the outside world. What they weren't expecting, though, was the emergence of another deadly threat.

The breach also gave way to the escape of a band of malfunctioning prototype robots. Armed and incredibly dangerous, the robots could either be an indomitable force... or an unexpected ally in their battle against the infected masses.

Yes, Dolph Lundgren has signed on to lead the cast of Battle Of The Damned. He'll kill the already dead even deader.