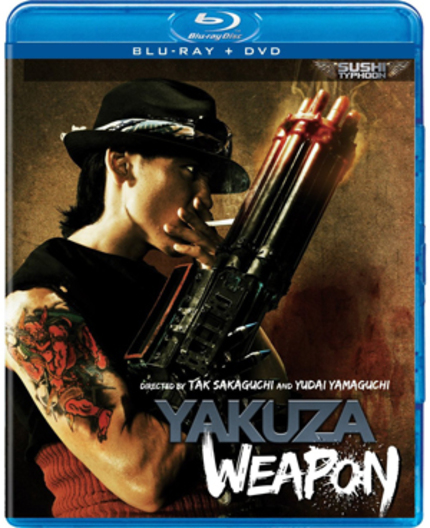 Sushi Typhoon's latest film has been making the festival circuit for many months now, and February 7th marks the Yakuza Weapon's home video debut from Well Go USA. I first caught wind of the project when we reported on one of the many collaborations involving Japanese stunt madman Tak Sakaguchi (Death Trance, Versus, Samurai School, Etc...) and director Yudai Yamaguchi (Battlefield Baseball, Cromartie High School) and was sold on the idea immediately.  I finally got a chance to check it out at last year's Fantastic Fest, where it played early in the day after a long night of horror flicks and beers, and it left me a bit cold.  However, revisiting it for this review, I can easily boost this to the upper echelon of Sushi Typhoon features as an engaging film with a charismatic lead that moves very quickly.

Yakuza Weapon is the story of Shozo Iwaki (Tak Sakaguchi), the son of a Yakuza boss who has recently been assassinated. Upon receiving the news, Shozo, who was acting as a mercenary soldier, returns to Japan with his two tightest bros to see what's going down. Once he arrives, all of the mess he left behind begins to catch up with him, and what starts out as a simple vendetta, turns into a typically Sushi Typhoonish gore-a-thon with crazy prosthetic effects and digital buckets of CGI blood.

I'm no more of a fan of CGI blood than the next guy, but in these films it's all part of the aesthetic. Sushi Typhoon has done a fantastic job of building a brand around their particular brand of insane Japanese films. Whether you like them or not, there's no denying that there is a continuum along which all of the films fall.  I have a love/hate relationship with this company, I think that often they rest on their laurels in the attempt to out-crazy one another and completely abandon story.  However, Yakuza Weapon is not one of those film, there is a tight story, plot driven action, and characters that, while not particularly deep, have understandable and well-drawn motivations.

The major selling point of the film is Tak Sakaguchi, as is the case with pretty much any Tak film. His particular brand of insane stunt work, and the work performed by his action team is second to none in Japan when it comes to balls-out craziness. The most memorable piece of action is a five minute single shot fight sequence in which Tak takes out a couple dozen bad guys with his bare hands. The amount of choreography for a sequence like that is pretty impressive, and the team pulls it off well. Most of the action sequences were directed by Tak, but for this one they brought in outside help.

The image on the DVD and on the promo poster of Tak with the machine gun arm seems too close to the Machine Girl poster, but I'd imagine that wasn't unintentional. Machine Girl sold like crazy, and even though the gun isn't in the film a whole lot, it certainly is a striking image. I don't usually like deceptive marketing, but these are nothing more than modern exploitation films, and marketing is a big part of exploiting a market, so I understand.

While Yakuza Weapon doesn't sport the same level of insanity one might expect from Yoshihiro Nishimura, but it packages it's film in a more realistic world, so that's okay. However, that's not to say that you won't see some crazy shit in this film. There is a fight scene near the end of the film involving a nude girl that comes directly to mind, and it's something not to be forgotten easily.

Sushi Typhoon's films are really all over the map, but I do sincerely appreciate them giving filmmakers like Yudai Yamaguchi the opportunity to work in a way that is comfortable. Anything that gives him more freedom is okay by me, and if they can bring on more like-minded filmmakers and help them out a bit, I'm looking at you Minoru Kawasaki, I'm all for it. Yakuza Weapon is a solid film, and only a little bit too long, but it doesn't drag, and the action is fierce. If you're a fan of any of the elements involved, you're likely to be a fan of this product. Recommended.

As usual, this film was shot digitally, but the image is a bit odd simply because there is an intentional soft focus filter effect over most of the film. This isn't a problem with the transfer, but a lot of the film has a dreamy look to it.  The usual drawbacks of digital video apply here, blowout highlights and lost shadow detail abound, but that is the nature of the format, so I won't mark Well Go USA down for it. The image is Tak sharp, and the colors are vibrant, so I'm satisfied.  The audio suffers from no drawbacks, as the DTS-HD 5.1 Japanese audio is booming and the numerous gunfights and explosions will leave your furniture shaking.

In terms of extras, Well Go have provided a decent amount of bonus content. The least interesting piece of bonus material is the behind the scenes footage, which is largely fly-on-the-wall kind of stuff with a smattering of interviews. Then there are a couple of deleted scenes, one of which goes into detail of creating an image that appears on screen for less than a minute, and that is the 36 guardians of the highrise that Shozo Iwaki storms at the end of the film. These characters are only shown as tiny little windows on a larger screen for a split second during the film, but the individual sequences that created that larger screen are all in the deleted scenes, and they are pretty funny. Also included is a very fun short film featuring Shozo's henchmen called Takuzo Weapon in which Takuzo gets a series of Shozo/Machine Girl/Robocop-styled makeovers. It runs a little under 20 minutes, but it is well worth checking out, I really enjoyed it.