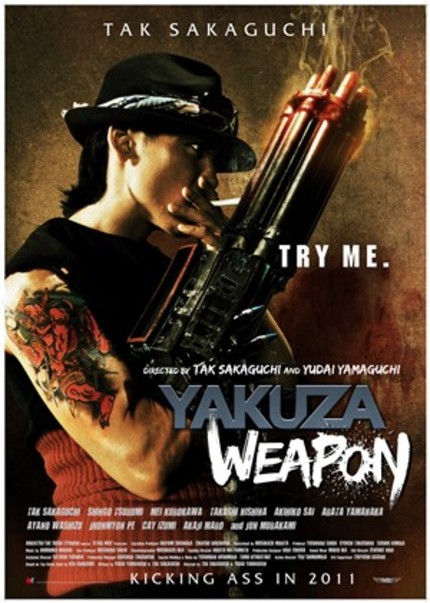 Three of the principal talents behind Japanese cult splatter groundbreaker Versus reunite for Yakuza Weapon with Tak Sakaguchi, Yudai Yamaguchi and Yuji Shimomura once again joining forces to bring the cult comic by Ken Ishikawa (Getter Robot, Cutie Honey) to the big screen. Fusing slapstick comedy with tightly choreographed action and outrageous special effects Yakuza Weapon is a riotously entertaining ride that demands to be seen on as big a screen as possible for two principle reasons.

One, to witness the stunning four an a half minute single take action sequence that features Sakaguchi mowing down masses of villains using both his bare hands and various mechanical enhancements. This one scene is the single best action performance Sakaguchi has given in a career full of highlights and stands as one of the very best pieces of choreography attempted by acclaimed fight director Yuji Shimomura.

And two? Waiting for Sakaguchi at the end of that fight sequence is Sushi Typhoon regular Cay Izumi as a character known simply as the Naked Human Weapon. She earns the moniker in a jaw dropping sequence that will have cult film fans on their feet cheering for more.

Sakaguchi stars as Shozo, a tough as nails son of a yakuza boss who has been forced to live in exile after a string of violent encounters. But when Shozo's father is killed by a rival who means to dominate all of the yakuza clans Shozo is called back home by a government agency who want his help to bring down this new power. Shozo wants nothing to do with his government benefactors but after his initial encounter with his new enemy leaves Shozo short one arm and one leg the government forces rebuild him into the ultimate killing machine, hiding a machine gun in Shozo's severed arm and rocket launcher in his missing leg. Cue carnage.

Co-directed by Sakaguchi and Yamaguchi, Yakuza Weapon alternates between scenes of enormously broad comedy, deviant behavior and outrageous violence. Sakaguchi snarls and stomps his way through scenes, wreaking havoc upon his enemies while trying desperately to avoid the amorous advances of his jilted would-be fiance. It's a bit of a schizophrenic film with comedy and action elements sometimes seeming to be in conflict with one another but Sakaguchi is his normal charismatic self while Yamaguchi proves again to be an inventive and playful force behind the camera.

Where Yakuza Weapon really soars is in the action sequences. Fight choreographer Yuji Shimomura is one of the best in the world - he is a long standing leader within Donnie Yen's fight team - and the long standing relationship between Shimomura and Sakaguchi allow for the two men to execute impossibly complex fight sequences despite the tiny budget and rapid shooting schedule allowed by the typically low Sushi Typhoon budget. Sakaguchi has done all of his best action work with Shimomura at his side with the two men improving each time out together and their work here is fabulous - truly inventive and creative stuff.

Will Yakuza Weapon win any converts to the Sushi Typhoon school of cult splatter pictures? No, realistically it won't. You either like this stuff or you don't and this will not convince anybody on either side to switch camps. It does, however, stand as one of the best films of the type this year, one that showcases a degree of technically proficient film making that may surprise critics while also serving a reminder that while films within the splatter movement may share certain characteristics there are also a number of unique and distinct voices within it.