An Ode To Jar Jar: THE PHANTOM MENACE In 3D 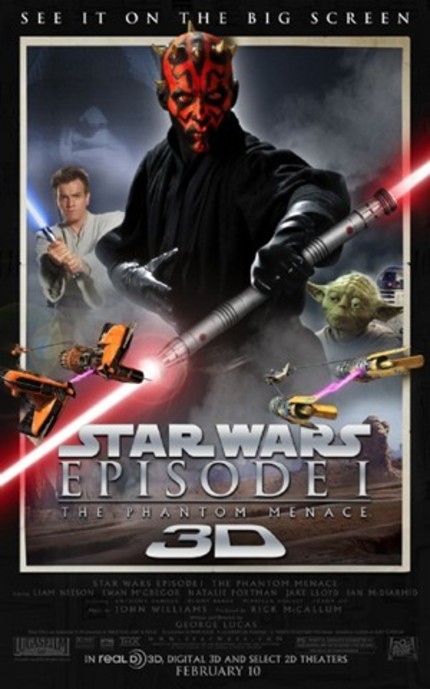 Let's get all the preconceptions on the table, shall we? I get it, most of a certain age despise the inelegantly titled STAR WARS: EPISODE ONE - THE PHANTOM MENACE. It managed for many to deflate decades of pent-up expectation while simultaneously creating a new community of haters, those who spent inordinate amount of time bitterly complaining about their childhoods being "raped" and such ilk when the film was released twelve years ago.

I will not even attempt at rescuing the film from those that refuse to give in to its various charms. If the swinging and vwimming of lightsabers and a podrace isn't a sufficient reason to experience the film on the big screen, then there's no point in arguing. I grant that my objectivity may be called into question about the quality of the work. I should point out for the record that in May 1999 I joined a slew of people in line at the late and lamented York cinema in Toronto to see PHANTOM on opening day, actually staying some 26 hours for eight consecutive showings.  I subsequently ended up seeing the film about 50 times on the big screen, and numerous other times at home.  It's a STAR WARS film, which still means something to a certain breed of person, and when tasked I can successfully and tenaciously argue that bits and pieces of this film live up favourably to any other more celebrated moments of the saga.

Adding to the hostility for some, the recent renaissance of this type of release has seen multiple, sometimes kneejerk reactions against  all things 3D. Simply put, common wisdom suggests that if 3D works at all, it's only in the form of images actually captured using stereographic  rigs (AVATAR, HUGO, Herzog's CAVE OF FORGOTTEN DREAMS) or CGI animated films rather than the suckage of so-called post-converted films (read: CLASH OF THE TITANS). What's often lost in these conversations is the fact that almost every major "native" 3D presentation undergoes some form of post-processing - the quality of the presentation has far more to do with the skill and time taken to do the process rather than how the 3D imagery was actually created.

We're brought then to a non-aesthetic argument about 3D in general. It's easy to determine what makes for "bad" dimensionalization, regardless of capture format, and much more subjective to say what makes for a "good" one. Excessive strobing, ghosted images, mismanaged planes, all of these are signs of poor stereography and indicative of some of the more hated presentations. None of these are evident in PHANTOM MENACE. The aesthetic arguments about 3D then boil down to things such as the angle of the shots, the pace of the cutting, the levels of Z depth (in or out of the plane of the screen) that are up for debate. Thus, an excellent technically executed 3D presentation can, for some, still be either distractingly gratuitous or so subtle as to make the premium price and necessity of wearing tinted glasses indoors an annoyance.

I will say that the most common complaint that will be trumpeted about THE PHANTOM MENACE's release will be for those that feel that there's not "enough" 3D in the film, as if those SCTV/Doctor Tounge, swooping-into-your-lap moments are what makes for good stereography. For a film that's at its heart aimed at children (discussions of Tax and Trade disputes aside), this is an extremely adult use of the technology. Naturally, the film was never shot to emphasise certain angles conducive to that in-your-lap feeling. Compositionally, the film almost exclusively creates diagonals across the 2.35:1 space, meaning that for the most part the 3D process creates a window into it environment, granting the viewer depth into the screen's proscenium rather than a bunch of stuff jumping out at you. I prefer this kind of work, and would argue that often shooting as per a usual 2D film makes for better 3D presentation, rather than composing shots merely to show off the effect. Take THOR as a recent example, a post-converted film I thought did well to keep things flat when necessary and widely dimensional when called for.

There are a number of instances in PHANTOM MENACE where the zing of 3D is allowed to shine, starting with the title crawl to infinity with an epic star field in the distance. Similar emphatic moments occur during the podrace, including a scene where young Anakin points his magnetic coupler right into the lens, incurring one of those woozy, out of the screen shots that most 3D animated films emphasise in order to titillate the audience with the novelty of the process. For the vast majority of the running time, however, the use of dimensionalization is subtle to the point of being almost unnoticeable. I mean this, however, in the best possible way - there's a lack of showiness or gratuitousness in the presentation, it all becomes as matter of fact as regular vision. After all, we don't spend our regular waking ours obsessing about how astounding everything looks out of stereo vision, yet to look out of one eye flattens reality in a way we've come to expect on our cinema screens.

Reviewing many of the scenes soon after the screening on regular Blu Ray emphasised just how flat it all looked in contrast. At its best, the 3D really does allow us to peer into the world on screen. The aerial shots of Naboo are given greater sweep, the underwater scenes feel more claustrophobic. Forgetting the common hatred of Jar-Jar, the other CGI creatures, from Sebulba to Watto, seem better integrated into the scenes with their human counterpart. The new CGI Yoda, recently added to this film (along with eye blinks for certain masked characters and other minor alterations) looks positively fantastic on screen, the subtle shift in perspective and lighting granting the character a greater sense of believability.

There are, of course, compromises with the current tech of 3D projection, greatly dependent on the venue you manage to catch it at. At my first screening, the image was soft and the colours darker than expected. The subsequent midnight public screening took place across the hall at a newly retrofitted setup with Christie 4K projection, and the difference was startling. The micro details of the image were immediately made more apparent, from being able to make out the subtle weaves on the costumes of the human characters to the subtle facial animation and textures of the CGI players.

Even more clear was the difference between using the disposable RealD glasses and the set of Oakely 3D Gascans I picked up for testing purposes - the difference in clarity between the (excessively expensive) Oakleys and the public lenses was immediately apparent, with the optically superior lenses allowing a far greater clarity of presentation while, unfortunately, exacerbating slightly the degraded luminosity of the image by having a darker tint. Regardless of eyewear, the colours through the lenses were in keeping with the original 2D presentations palate, with only occasional issues of saturation (the pallid tones of the Maul's saber on Tatooine comes to mind).

In the twelve years since it was first shown, we've seen the conclusion of Lucas' tale, and an entire generation growing up with the films being a side project to the draw of the CLONE WARS cartoon. For some this may be their first time seeing any film on big screen, let alone a STAR WARS film. If over the next six years these films are introduced to an entirely new audience not simply on home video  but in a real theatre, and 3D is the excuse to get them out to see on the big screen, then this too is reason enough to justify the rerelease.

In the end, then, the 3D presentation is actually more agreeable for me than the showiness of AVATAR, a film where at times Cameron purposely through lens choice and composition sought to literally throw into our face the sterographic space. Any fears of the conversion of PHANTOM MENACE being some nausea inducing fun ride, or suffering from the characters appearing to be on separate planes from the background like some cheap parlour trick, are easily belayed. Quite simply, the conversion is technically excellent, leaving it up the viewer whether or not they think it should have been pumped up more, or eschewed entirely. For me, the ability to once again see (and HEAR!) these films at a proper venue during the limited run is the real draw, the 3D an added but welcome bonus.

It's a STAR WARS film, on big screen, with 7.1 sound and a quality digital projection. That's a pretty big calling card for a whole heap of like minded individu... uh, nerds. Welcome back, my friends, see you in line.

Do you feel this content is inappropriate or infringes upon your rights? Click here to report it, or see our DMCA policy.
3Dcineruminationsgeorge lucasJar Jar Binksphantom menacestar wars