Sundance 2012 Review: ABOUT THE PINK SKY is Partly Clouded by Style 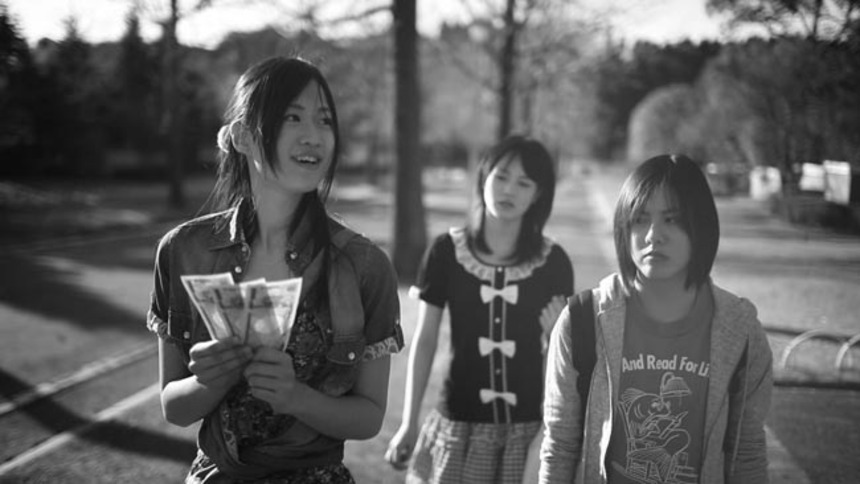 As the only film from Japan to make the cut for this year's Sundance Film Festival, Keiichi Kobayashi's debut feature is notable for its rejection of contemporary Japanese filmmaking norms. Shot entirely in black and white and devoid of any music, About the Pink Sky would seem to have perfect minimalist art house appeal. However, this story of a group of high school girls on a journalistic mission is much more mainstream than the look and feel of the film might suggest.

Protagonist Izumi (Ai Ikeda) has an odd hobby of rating newspaper articles based on her own positivity criteria. This hobby comes in handy when Izumi finds a wallet loaded with thousands of dollars worth of Yen and determines it belongs to the son of a politician she's recently read about. Convinced the money is dirty, Izumi lends a tidy sum to a friendly old man. When her friends catch wind of the wallet, they convince her to return it to the boy (he's cute after all). This leads to a plot that involves the three girls starting a highly positive newspaper as repayment to the boy.

As with any film shot in black and white, Kobayashi's minimalist aesthetics are the movie's defining visual characteristic. The decision to forgo color here seems to be purely stylistic. There is nothing about this contemporary plot that would suggest the filmmaker's motives. In fact, one of the key plot elements (and the film's title) involves burning a particular wood that gives off a pink smoke. This detail is, of course, lost without the color. From what I can infer, this does not appear to be an ironic decision on Kobayashi's part.

While the story of the girls and their newspaper is not particularly enthralling, it stays generally interesting throughout. What is most notable is just how mundane this world is. At times it feels more like a situational television drama with its melodramatic characters and unearned plot twists. Kobayashi may have been influenced by Shunji Iwai and his stylized high school world in All About Lily Chou-Chou, but that film seemed to do a better job connecting the stylizations with the world of the characters.

While Japan's only entry at Sundance is not to be avoided, it's rather difficult to get too excited about recommending. Kobayashi has done some interesting things with style but falls short with his story -- perhaps typical of a debut feature filmmaker with a background in music videos. Still, there is promise shown by Kobayashi and Japanese film fans will want to keep an eye out for what this director does next.

About the Pink Sky

Do you feel this content is inappropriate or infringes upon your rights? Click here to report it, or see our DMCA policy.
Keiichi KobayashiAi IkedaEna KoshinoReiko FujiwaraTsubasa TakayamaDrama