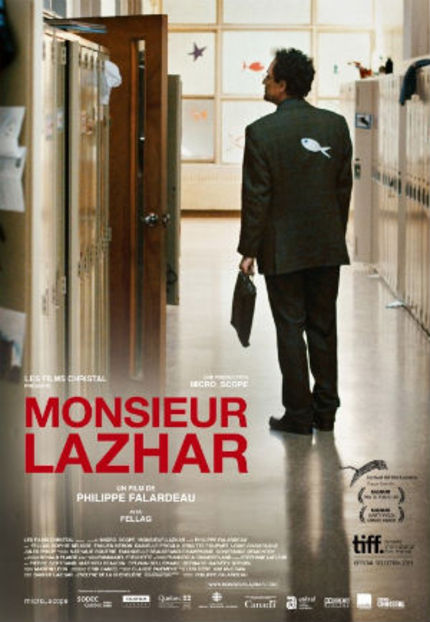 I'm not sure it can be overstated just how badly MONSIEUR LAZHAR, directed by Philippe Falardeau, could have failed in the wrong hands. The story of a North African immigrant (Mohamed Fellag) who comes to a Montreal school to teach after the former instructor kills herself during recess, nine times out of ten the film would have been either a complete maudlin mess or a sanctimonious, manipulative, cowardly piece. In other words, in these days of drivel such as THE HELP and THE BLIND SIDE, thank the cinema gods that Hollywood had little to do with this little gem of a movie.

From its opening scenes, LAZHAR demonstrates that it's a beautifully composed work. The colours of the film are rich but not over saturated, the camera work dexterous without being showy, the lighting doing much to convey the evolution that transpires in the classroom. From a camerawork standpoint, there's a wonderfully cinematic moment early on after the initial tragic incident is exposed - as a student runs to get help from a teacher, the camera remains in place at the door to the room where the suicide has taken place, waiting patiently for help as the sound of children returning from outside fill the surround channels. It's an extremely effective moment of direction, and instead of coming across as showy, it does much to draw the viewer into the world of the film with its measured, balanced take on a complicated story.

Aside from the technical elements, even more remarkable are the wonderfully nuanced and delicate performances Falardeau elicits from his child stars. Sophie Nélisse's turn as Alice, and Émilien Néron as Simon, both first time performers, bring a level of reality to the film that's quite engaging. Along with the entire ensemble of child performers, they're never mugging for the camera, nor are they coming across as overly coached or polished. Fellag's turn is also fabulous, anchoring the film with a dignity and wit that's perfectly in keeping with the film's tone.

Broken into its component pieces, the film is a fairly straightforward narrative. Certainly the fish-out-of-water elements, met with the supply teacher trope, could have led into DEAD POETS SOCIETY or even SCHOOL OF ROCK territory. This film is at its heart a fable, unfolding much like the ones that Lazhar reads to his class - an archetypical tale of redemption and forgiveness, with other complicating elements that mask what's at heart a universal, accessible story. Yet it is in the small scenes that expose character (an uncomfortable but sweet dinner date, the proceedings of an immigration hearing) that help enrich the story, allowing the narrative to become more wholly realized.

The most crucial part of the success of this work is that it doesn't lazily succumb to its own fantasy. The ending can't quite be declared nihilistic, but it does do well to respect in the reality of the situation's somewhat absurd elements, undercutting further our expectation that things will be tied up nicely in the end due to an overabundance of good intentions. This bittersweet conclusion solidifies the courage of the work to not rest solely on its own charms, and it's pleasing to see real repercussions for the unorthodox behaviour of both Lazhar and the administration explicitly addressed.

It is through this sophisticated balance of tonal elements, the sweet and sour, the tragic and the comic, that makes the film so remarkable. It's a beautifully realized work, with fabulous performances and a story intersecting elements of both fable and documentary.

LAZHAR's selection as the top Canadian film from TIFF 2011, and Canada's selection for best "foreign language" Oscar contention, is well deserved - it's one of the finer films from any land that I've seen in the last year, a welcome addition to a growing list of exceptional contemporary cinema coming out of Quebec.

Do you feel this content is inappropriate or infringes upon your rights? Click here to report it, or see our DMCA policy.
Philippe FalardeauEvelyne de la ChenelièreMohamed FellagSophie NélisseÉmilien NéronMarie-Ève BeauregardComedyDrama