Jason Segel And Ed Helms In The Trailer For The Duplass Brothers' JEFF, WHO LIVES AT HOME 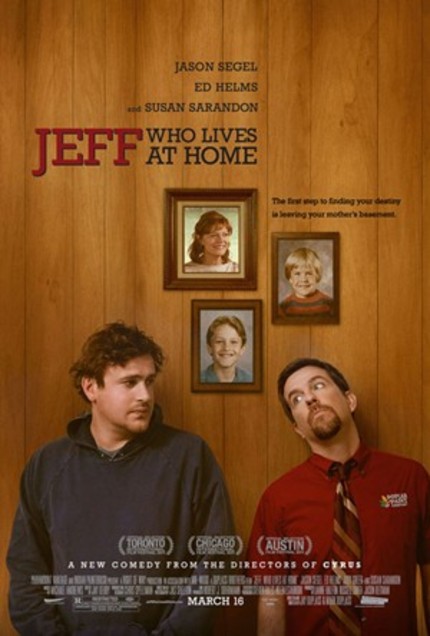 Never having been a particular fan of the Duplass Brothers - not that I dislike them, I'd simply never seen one of their films at this point - their latest effort came as a pleasant surprise at the tail end of the 2011 Toronto International Film Festival. Picked out the blue simply because it fit my schedule to fill my last slot on my last day of screenings, it ended things on a high, easily winning me over with its quirky charms.

On his way to the store to buy wood glue, Jeff looks for signs from the universe to determine his path. However, a series of comedic and unexpected events leads him to cross paths with his family in the strangest of locations and circumstances. Jeff just may find the meaning of his life... and if he's lucky, pick up the wood glue as well.

Make no mistake about it, despite the star power of Ed Helms and Susan Sarandon this is entirely Jason Segel's movie and he carries the character of Jeff with an oddly shambolic grace. He knows he's weird. He knows most people think he's wasting his life. He knows not even his own family understands him. But he just can't shake the idea that the universe has a message for him and on this particular day Jeff gets to be right.

As much as I like the film I came out of it thinking that the distributor - Paramount Vantage - was going to have a bear of a job marketing this thing. And while the first trailer is now out and people generally seem to like it that initial reaction still feels correct to me as it doesn't quite seem to capture what makes this thing tick. So bear in mind while watching it that this is a far-too conventional trailer for a considerably less conventional film. Check it out below.
Tweet Post Submit

More about Jeff Who Lives At Home