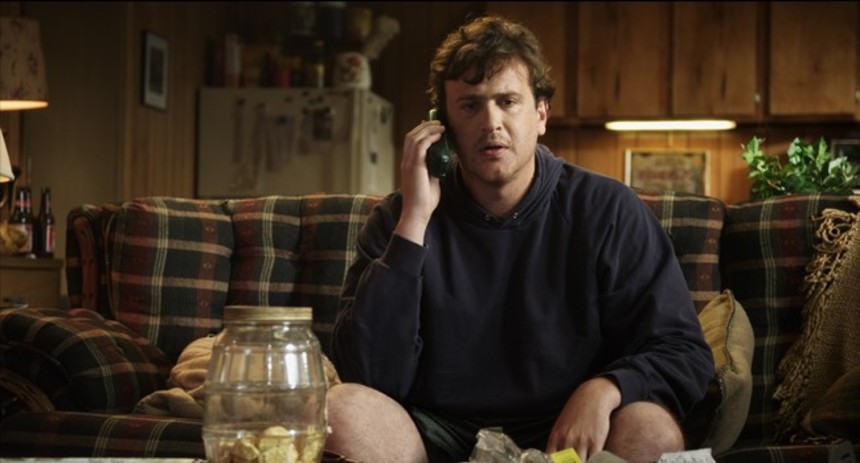 Jeff's life, it must be said, has not turned out the way he may have hoped. Thirty years old, a bit overweight, and unemployed, Jeff (Jason Segel) lives in his mother's basement where he spends his days smoking a bong and embracing a philosophy of live largely inspired by M Night Shyamalan's movie Signs, a philosophy in which even the most insignificant thing may actually be a sign from the universe. His mother calling him to buy some wood glue to fix a shutter upstairs? That's an inconvenience, not a sign. But the unknown caller demanding to speak to Kevin? Sign. Definitely. And so Jeff's trip to the store for glue somehow morphs into a shambling cross-town odyssey that will intersect with his brother's rapidly disintegrating marriage.

Despite the star power of Segel, Ed Helms and Susan Sarandon it is somewhat perplexing that the Duplass Brothers' Jeff, Who Lives At Home will be reaching theaters on the back of a major studio because this is a pure indie charmer, through and through. A quietly funny picture that could easily have descended into quirk in lesser hands, Jeff instead remains surprisingly grounded the core trio of actors lending a simple dignity and humanity to their characters no matter what circumstances they find themselves in. In the hands of Judd Apatow or one of his school Jeff, Who Lives At Home would have been a movie of extremes but in the hands of the Duplass Brothers it instead becomes a gentle portrait of three people struggling against their own isolation.

While Sarandon is her customary self - i.e. fantastic - as Jeff's mother and Ed Helms does a very solid job as Jeff's brother Pat it is Jason Segel that picks this movie up and carries it on his shoulders. He's got the most difficult task - to play a stoner who believes his destiny on this particular day lies with a stranger named Kevin without becoming a punchline to a bad joke - and he pulls it off effortlessly. Segel may never amount to a movie star - his body type pretty much guarantees that - but, by god, he's a fabulous actor. Segel gives Jeff unexpected layers, balancing the sweet naivete required to believe that the universe is sending him messages with the quiet despair that comes from having been wrong over and over and over again and knowing that he's a laughingstock to everyone.

Jeff, Who Lives At Home is the sort of film that is going to prove phenomenally difficult to market, one that isn't broadly funny enough to pitch as a mass market comedy but is too odd to put out there as a drama in any sense. I hope the marketers can crack it, though, because this is a film that very much deserves to be seen.

Jeff, Who Lives at Home

More about Jeff Who Lives At Home