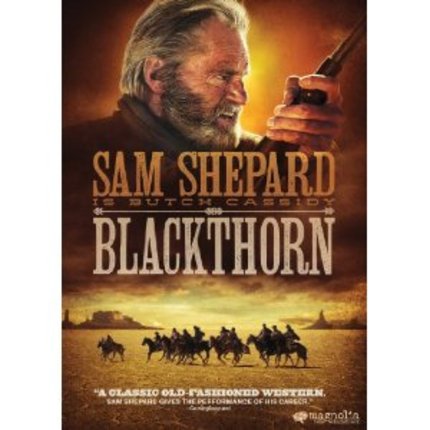 One of my favourite films of 2011, Blackthorn has recently been nominated for 11 Premios Goya (Spanish Oscars.) Now available on DVD and Blu Ray, Mateo Gil's haunting, elegiac western is both an homage to the second wave films of the genre of the 1970s, and part of the new wave, with less emphasis on heroic action and more on character and landscape.

The film is a what-if-story of Butch Cassidy, who possibly survived the final shoot-out in Bolivia, and has been living quietly under the name of Blackthorn for many years. His decision to return to America has been hampered by a run-in with a mining engineer, on the run for stealing money from the local mine owner. Blackthorn must help the man to get the money back, but he is still being chased by one desperate foe, and the engineer might not have told the whole story.

Action is not absent from the film; the action scenes punctuate the film with a rawness and desperation that would likely accompany anyone caught in a kill-or-be-killed situation. The Bolivian landscape that the film inhabits is both beautiful and sombre, hiding and revealing secrets at the same time, and Gil frames it  with great meditation. Questions of morality and liberty are fine-tuned are viewed with an unadorned eye, and a wonderful score. Sam Shepard anchors the film with his best performance in years, playing a man much older, wiser, but still able to think fast and shoot straight, with the years of loneliness, homesickness, and weight of killing on him. He is backed by great performances from Eduardo Noriega, Stephen Rea and Magaly Solier. Gil has referred to it as a very "macho" film, which it is. However, the female characters are much stronger than normally seen in the genre, which is refreshing.

While the gorgeous cinematography is best enjoyed on the big screen, a home viewing allows a chance to meditate upon the expressions of the actors and the subtleties of the action. Many films such as this one stand up to repeated viewings, with time and a pause button that permits greater reflection. This film, with its sparseness and simplicity of narrative, lends itself well to the intimacy of a home viewing.

The DVD extras follow a familiar pattern: original trailer, a short documentary about the making of the film, deleted scenes and an interview with Gil. But one of the treats is the inclusion of two of Gil's short films. Dime que Yo (Say Me) is a lovely vignette starring Fele Martinez, of two people debating the semantics and syntactics of romance. For all of you who have sat through countless Hollywood rom-coms with insipid conversations, consider this short the  far superior version, that focuses in on that which we all want to say to a prospective mate with Gil's highly tuned ear for clever dialogue.

The Western might be a neglected genre, but it certainly hasn't disappeared, and Blackthorn is proof that there are still great stories to be told.