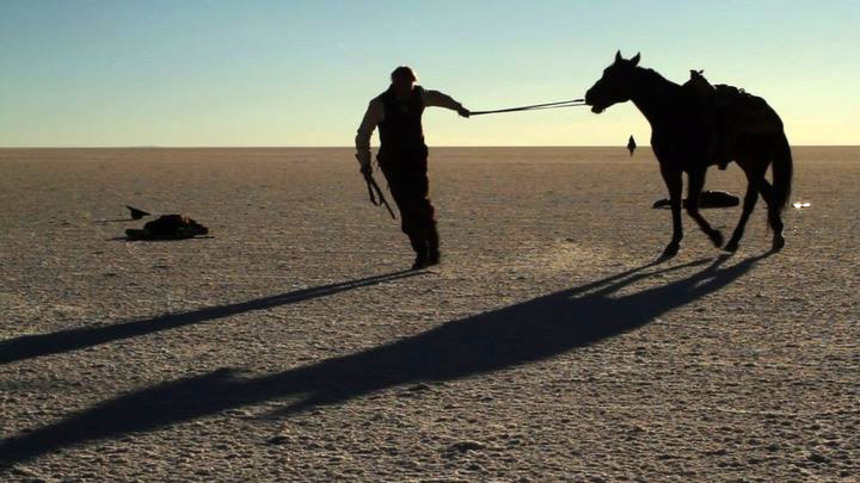 Available in the US via VOD tomorrow, and due for theatrical release (also in the USA) on October 7, Blackthorn is part of the new wave of neo-westerns (such as Kelly Reichardt's Meek's Cutoff and Jim Jarmusch's Dead Man) that move away from shoot-em-ups at the OK Corral and focus on people and places that have until this point been relatively ignored by the genre. Well, mostly. Because it's hard to have a western without a gunslinger, the film muses on the possibility that famous robber and gunman Butch Cassidy did not die in a shoot-out with police in Bolivia. Director Mateo Gil is best known for his frequent collaboration with director Alejandro Amenábar, writing the screenplays for Abre los Ojos, El Mar Adentro and Agora. So he is definitely comfortable working in genre cinema; and like many Europeans before him, it's not hard to see his attraction to the western. Blackthorn is not only a neo-westerm, but a neo-spaghetti-western. Its success rests on Gil's instinctive understanding of the role of the landscape as a character, and in the performances of its leads, Sam Shepard and Eduardo Noriega.

James Blackthorn (Shepard) has been living quietly in Bolivia since the death of his partner, the Sundance kid. But he is getting on, and decides it's time to return to the US, after the death of his partner's lover, Etta, in order to see their son. But a random encounter with a lost engineer sees the loss of Blackthorn's horse and all his life savings, and he must help the engineer, Eduardo (Noriega) recover money he stole from a local mine owner. But Eduardo is being chased not only by his victim's hired henchman, but an old adversary (Stephen Rea) and some pretty pissed-off locals as well, and Blackthorn finds himself reviving some of his old ways.

Miguel Barros' script is pretty bare-bones, but that is as it should be. Blackthorn lives a mainly solitary life, and is a man of few words. South America has not developed much beyond the wild west of Blackthorn's youth, and while he likely has no regrets about his criminal past, the long-ago death of his friend and loss of Etta still weigh heavily upon him. His homestead is shown as intimate and warm, bare but comforting, a place he has kept safe from violence. He has gone almost native, and treats outsiders with resigned disdain. But traveling across the desert, in the wide open spaces, he and the land are weary, and they camera drags Blackthorn back to a world of violence against his extreme will. Included in the film are flashbacks to Cassidy, Sundance and Etta, and these memories serve as reminder to Blackthorn that there are some things he cannot escape. Gil and cinematographer Juan Ruiz Anchía fill in where the script leaves off. As Blackthorn and Eduardo attempt to reach the coast across the salt flats, where there is literally nowhere to hide, the camera moves between close-up and wide shot; this is the man and this is the space he must endure. In an old-school western, the hero triumphs because he is the better man. In the neo-western, he might only triumph if he is lucky, and it is hardly a victory to celebrate. The Bolivian landscape is at once far more beautiful than the American west, and far more dangerous. There are no signs of encroaching civilization; this is home to no one.

Shepard is not nearly as well-known as he should be. He proved his acting mettle as Chuck Yeager in The Right Stuff, but is probably more famous as one of America's best playwrights. He has always shied away from the acting spotlight, which serves him well in a role such as this. The intelligence and existentialism of his writing work come through in this performance, and show a Blackthorn/Cassidy as a man who, though he has learned that he can only now appreciate the small pleasures of life, the past hangs over him like a greying cloud, exile will take its toll on the psyche and he must run to the siren call of home. Too many bodies, too many deceptions, and even he cannot escape the one-last-job scenario. This is in some ways reminiscent of Clint Eastwood's work in Unforgiven, but Blackthorn doesn't have anyone to cheer him on in his struggle to define his own moral code. He will still kill those who seek to kill him, but Shepard conveys in his eyes a desperate longing to put the gun down. Like Shepard, Noriega is not well known outside of his native Spain, where he is one of its best and most prolific actors. And like Shepard, he can convey subtle emotions and hidden secrets with a flicker of a smile and. He and Shepard have fantastic chemistry, and in some great comedic moments, banter back and forth so well you would think they had worked together for years. This is credit both to the script and the actors, that they slip into these roles with great ease. But both characters are foreigners in the Bolivian landscape; a few might welcome them, but most do not. Even if Blackthorn makes it home, he will be an outcast there as well.

It is hard to avoid thinking of George Roy Hill's Butch Cassidy and the Sundance Kid when watching the film; but even so it is not a detriment. Blackthorn is not attempting to replace it or overwrite it. There are flashback scenes, of moments between Cassidy, Sundance and Etta, and they stand solidly on their own. Think of this film as a kind of spiritual cousin. Times have changed, both in the western genre and in the world of the film. Cassidy and Sundance might at one point might have been glorified in their exploits, but glorification of the criminal is done. Blackthorn has a kind of moral code now, in his age, though it is not necessarily different than before. He knows the good from the bad, but perhaps still does not quite understand on which side he belongs.

Blackthorn is a minimalist, slow-burn film, beautifully photographed and scored. Moments of intense action are juxtaposed against a vast, impossible landscape, and its unexpected ending is quietly devastating. Like its characters, it does not reveal its secrets too easily, but when it does, it makes you laugh and breaks your heart.