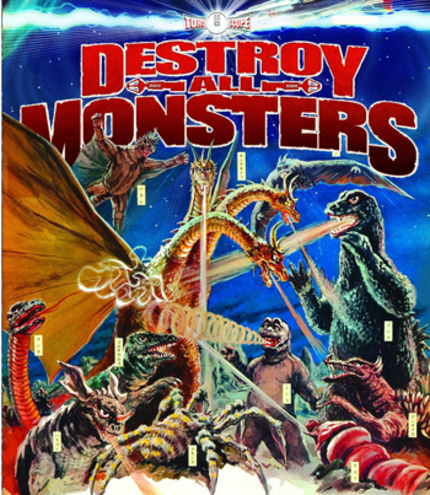 Toho's Destroy All Monsters has been out of print on DVD in the US for a long time, and even that disc was letterboxed widescreen, so when Tokyo Shock announced it was coming up on Blu-ray, there was tempered enthusiasm.  The film itself is rather unremarkable, apart from it's convergence of several classic era Toho monsters who mostly destroy cities and spend relatively little time battling one another.  However, completists will be happy to have this one in their collection.  The film was released not too long ago on Blu-ray in Japan, but this is the first reasonably priced Blu-ray edition of Destroy All Monsters.  While the disc is a marked improvement over previous DVD editions, it still leaves a lot to be desired in the A/V department.

DESTROY ALL MONSTERS (1968) is universally considered a strong fan favorite of the entire Godzilla series! It's an all-star monster rally of epic proportions featuring Toho's greatest and wildest mammoth monsters in the ultimate, all-out rubber suit rumble! See Godzilla, Mothra, Rodan, King Ghidorah, Anguirus, Minya, Spiega, Baragon, Gorosaurus, Manda and Varan in all their titanic glory! The film was directed by the famed Ishiro Honda, director of the original 1954 film and the last entry to feature the dream team of special effects supervisor Eiji Tsuburaya, music composer Akira Ifukube and producer Tomoyuki Tanaka.
As the 20th century wanes, Japan has corralled all of its troublesome monsters onto Monster Island. There, in militarily enforced cease fires, exist Godzilla, Barugon, Minilla, Mothra (in larvae form), Rodan, Gorosaurus, Kumonga, Anguirus, and Varan.  That is, until the aliens show up... Soon, the control center buried miles beneath Monster Island is overcome by alien and the Japanese military loses track of the island's inhabitants, that is until they start appearing in major population centers around the world.

Destroy All Monsters is another of the series of late '60s kaiju films, Toho and otherwise, that used crazy, ridiculous scenarios to justify the presence and behavior of the giant monsters that hate Japan. In this case, the aliens implant mind control devices into the kaiju and direct them to level Moscow, Paris, London, etc.  The scenes of destruction are pretty impressive, I must say, but the real fun doesn't come along until the end when, stripped of their mind control devices, the monsters reconvene at the alien strong hold under Mt Fuji to battle their secret weapon, King Ghidorah.  From there the action turns hot and heavy with lots of guys in suits beating up on other guys in suits.

The film lacks the overt political themes that the kaiju films had mostly abandoned in the '60s, but still manages to keep it fun.  If it weren't for the sheer abundance of beasts, Destroy All Monsters would be considered a lesser entry in the Godzilla series, and many aficionados still consider it so.  I think it's a great opportunity to see all of these monsters in one place.  If you are a kaiju fan who hasn't seen it, I can certainly recommend it, but otherwise, there are better, more engaging, places to start.

Media Blasters/Tokyo Shock doesn't have the best track record on Blu-ray, and while this disc blows Ichi the Killer out of the water, it still isn't as good as we've come to expect Blu-ray to be.  First, the good stuff, Destroy All Monsters is presented in its original 2.35:1 aspect ratio in a transfer that is mostly very clean.  The down side is that the film never really exhibits any fine detail, it's hard to tell if it is the transfer or the original materials that are the problem.  It isn't unwatchable, and it is a hare's breath better than DVD, but not the knockout I was hoping for.  In addition to that, the colors, while pretty true throughout, are a bit subdued, though they don't seem to have shifted, which is good.  The audio is much better, with Tokyo Shock offering both the original Japanese in DTS-HD MA 2.0, and two English dubs, both in DTS-HD MA 2.0.  The Japanese track and the first English track are both pretty good and full sounding, however, the second English dub sounds pretty rough.  The disc has it's problems, however, this is the best we're likely to see for a while.

In terms of extras, Tokyo Shock have provided two segments worth noting.  First is the feature commentary with Godzilla scholars Steve Ryfle and Ed Godziszewski which is enlightening and geek-tastic.  The second is a reel of promo material for the film, also fun, but certainly less insightful.

Destroy All Monsters has the dubious privilege of being the last Godzilla feature on which Godzilla FX creator Eiji Tsubaraya was directly involved, and for that reason alone it is worth checking out.  It was also directed by the director of the original, Ishiro Honda, so that is also a big bonus.  However, as a film, Destroy All Monsters is very uneven.  But then again, it has eleven monsters fighting each other!  I'm torn on this one, but I lean toward a recommendation simply because it is (a) in print, and (b) screen filling.  Make your own choice.

Order Destroy All Monsters on Blu-ray at Amazon