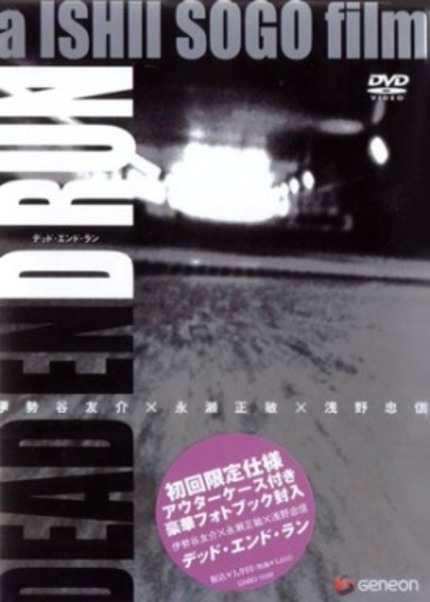 By now you probably should've realized Sogo Ishii (August In The Water, Electric Dragon 80.000V, Kyoshin) is set firmly on my shortlist of favorite directors. I appreciate his punk approach to cinema, but he also has a softer side he's not afraid of showing. Dead End Run combines both aspects of Ishii's work and blends them into an explosive rush of beauty and style. The result is a 60 minute anthology film featuring three phenomenal shorts.

Dead End Run is Ishii's "gone-digital film". Like many others he started experimenting with digital film in the early 2000's. While the image quality may be a bit grainy at times, it's clear that mobility and editing benefit a lot from the digital approach. Bluntly said, Dead End Run is Ishii's way of experimenting with his new toys, lucky for us the result is a bit more than just some technical wizardry. While the anthology itself is not really high on concept (three people on the run are trapped by a dead end), the shorts themselves are still pretty exceptional in their own way.

Last Song (the first short) features a beautiful dance macabre. While Ishii is known for tightly incorporating music into his films, this is probably his first full-fletched musical, and it's not even set to anything remotely resembling punk. When Yusuke Iseya is trapped in an alley he kills a passing girl by accident. The girl seems rather pleased with her faith though and decides to recite one last musical number with Yusuke. In only fifteen minutes time Ishii builds up a very cute and endearing romance that left me quite perplexed when it suddenly ended.

While the music itself is very poppy, the cinematography, dance choreography and sound effects make for a very intriguing effect. And while the setup might be quite absurd, Ishii has little trouble to make this short come to life, transforming it into a quirky yet very believable romance. A very strong opener to this anthology film and my favorite of the three films shown here.

The second short (Shadows) features Masatoshi Nagase, no doubt one of Japan's coolest actors in the business. The ideal man for the job too, as this short is basically a 15-minute Mexican stand-off between Nagase and himself, intertwined with a similar stand-off from the past. Ishii goes western here, as he focuses rigidly on faces and glides his camera between the two opposing forces, catching every angle before bringing the showdown to a surprising yet fitting ending.

I'm not big on westerns and I usually find these kind of shoot-outs pretty boring, but it's clear that a different setting and more inspired camera work can do a lot for a scene like this. It's a great exercise in getting the most out of one single moment in time, as long as you manage to keep it varied and interesting. A great little short that is low on substance, but high on style.

The third and final short (Fly) is a bit different in feel from the first two. It doesn't play at night and Ishii puts more focus on mobility, energy and action, making this short a bit more lively and nervous. The film features Tadanobu Asano on the run for the police. When he flees on a rooftop he runs into a girl which he takes hostage, quite unaware of the suicidal tendencies of this young woman.

The short becomes a bit more fantastical near the end of the film, which pretty much saved this short for me. While the first half isn't too bad, it's nowhere near as special or spectacular as the first two shorts. Asano is cool as ever, but the camera work was a bit too nervous to my liking and the build-up towards the ending a bit too random. Still, counting the second half of the short, it's still a beautiful little piece of film making.

Overall Dead End Run is a fun, varied and classy anthology film where Sogo Ishii allows himself to show his more experimental side while leaving room for some softer touches. There are some very nice parallels between the different shorts, there is plenty of audiovisual trickery and the short running time makes sure you won't get bored. If you like your films a little different this is a definite recommendation.