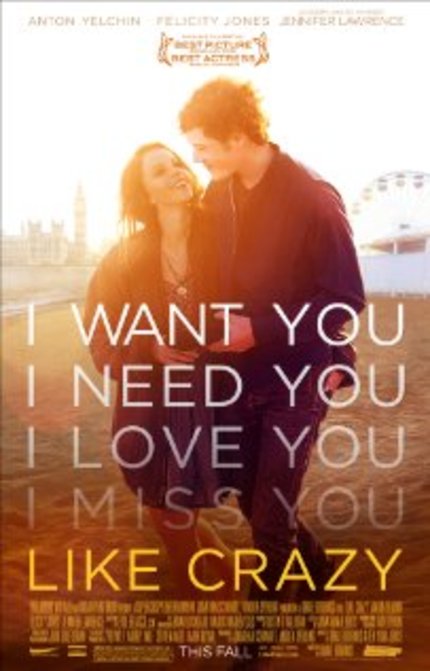 After a burst of initial soaring acclaim, the critical dust seems to finally be settling around "Like Crazy", an emo/tragi-romance about a couple of crazy kids and their torrid love life (Anton Yelchin, "Terminator: Salvation", and Felicity Jones, "The Tempest"). Actually, the kids (ahem, young people) are not really all that crazy at all, despite the wordage of the film's title. The point of it all seems to be how utterly normal and true their troubled passions for one another are, amid a long-distance relationship prolonged via text messaging and mobile devices. Elvis Presley never had such technology in his many boy-meets-girl/boy-loses-girl/boy-gets-girl-back pictures, but then again, no one was proclaiming his stale film cannon as the definitive cinematic portrait of young love in that era, either. But that old Elvis movie arc is exactly what we have here, even as it's all gussied up in aesthetically pleasing indie film visual coarseness.

The pleasing visuals are the primary positive take-away of "Like Crazy", leaving this reviewer with the hope that this promising up-and-coming filmmaker (Drake Doremus, "Douchebag") continues to hone and perfect his camera style, even as he may also set aside such childish things as the "90210" relationship drama that this film is built upon. But even in the rough-hewn lushness of the film's look, there's a lingering artifice at odds with the director's desired naturalistic vibe. Look at the scene when the leads first go for coffee - Doremus is so intent to have each character occupy the frame alone that he actually appears to be blocking the other at the edge of the shot by literally holding something in front of the lens. I'm all for intentional preplanned utilization of visual film language, but my gosh, don't be transparent about it.

At eighty-nine minutes, "Like Crazy" still manages to wear you down just a little bit. There are moments of the film that can't help but resonate, even if it's also wearing its emotions on its sleeves, and touting its characters heartstrings out in the open, tempting their world to pull, pull away on them.

Leads Yelchin and Jones sell every moment of their characters years-long bond as lovelorn soul mates, from their initial college age meet-cute to their jumbled puzzle of commitment across the ocean and other lovers. The two won't let go of one another, even after they've gotten into new secret relationships. (Jennifer Lawrence's character is the apparent big loser in all this; the nice girl likely to lose out to Jones at least once, maybe more.) Like so many love relationships that go on far passed the expiration point, "Like Crazy" has a promising initial air, but then the bad time outweighs the good. The film just wants to be honest, but it just can't let its guard down all the way. Which makes me question the point of both making this and watching it. It's a "meh" movie for the "meh" generation.

Do you feel this content is inappropriate or infringes upon your rights? Click here to report it, or see our DMCA policy.
Drake DoremusBen York JonesAnton YelchinFelicity JonesJennifer LawrenceCharlie BewleyDramaRomance