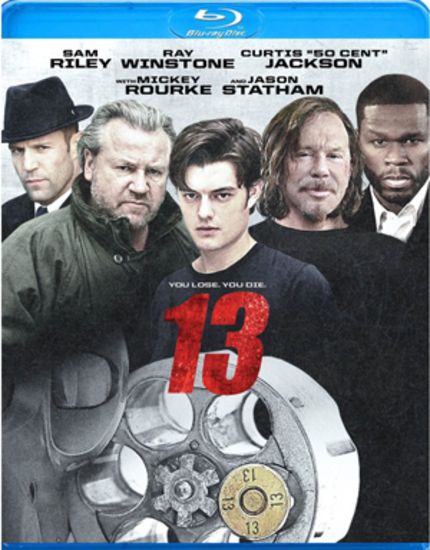 I will confess up front to being among the half-dozen independent film fans in the Western world not to have seen 13 Tzameti. I came to this film fresh and free of expectation and without the need for comparison. It is a bold, and odd in my mind, choice for a foreign director, Gela Babluani, to choose a remake of his own film as his entry into Hollywood, but it has worked on occasion. That being said, while I was occasionally impressed by 13, I can only hope that Tzameti was a better film, otherwise I don't understand all of the hype. Anchor Bay have taken on the film, and while they did decide to give it a Blu-ray release, they did not include a single extra, not even a trailer, and I think that about sums up the feeling about the film. It is decent, but with the cast they had, it definitely feels like it should have been more.

Jason Statham, Ray Winstone (Indiana Jones & The Kingdom of the Crystal Skull), Academy Award® nominee Mickey Rourke, Curtis "50 Cent" Jackson, Academy Award® nominee Michael Shannon ("Boardwalk Empire") and Sam Riley (Control) star in this intense thriller about the underground 'sport' of Russian roulette. It is fiercely organized and ferociously secret. It attracts depraved gamblers and desperate men. And tonight, one naive young player will mistakenly become a numbered participant in a deadly world of power, violence and chance where the ultimate bets are decided by a squeeze of the trigger. The stakes are high, but the payout is more than he can resist.Emmanuelle Chriqui ("Entourage"), Alexander Skarsgård ("True Blood"), David Zayas ("Dexter") and Ben Gazzara (Road House) co-star in writer/director Géla Babluani's white-knuckle American remake of his 13 Tzameti, the film that swept Europe, shocked Sundance and now translates as one of the most extreme edge-of-your-seat thrillers of the year.

13 is the story of an underground tournament of Russian Roulette. Each year, 20 or so very wealthy men bring in expendables to play on their behalf.  The winners walk away with millions, most of the contestants don't walk away at all. When an electrician with a family member languishing in the hospital of multiple unknown ailments gets wind of an opportunity to make some money, he manages to take the place of one contestant when he OD's and dies. Sam Riley (Control) plays Vince, the above-mentioned electrician, while he gets the most screen time, it's hard to say that any one actor is the "star" of 13.

The most impressive thing about 13 is the cast, the list of actors involved is enough to make you cream your jeans.  Among the on-screen talent for this film are Riley, Jason Statham (The Transporter), Mickey Rourke, Ray Winstone, 50 Cent, Michael Shannon (Revolutionary Road), Alexander Skarsgard (True Blood), David Zayas (Dexter, The Expendables), and Ben Fucking Gazzara. Rarely has such a wealth of talent been so squandered in a film.  Not a single one of these actors gets enough screen time to give their characters any depth. Hell, 50 Cent makes it to the cover, but he's not in the film for more than five minutes. The only character besides Vince to get any back story at all is Mickey Rourke, and as much as I like the guy, he plays the same character he's been playing for at least the last five years in every film.

I wasn't expecting much out of 13, and not much is what I got. I understand that part of the film's attraction is supposed to be the bizarre and unexplainable nature of this modern day Colosseum act, but never at any point do I care about anyone. In particular, Michael Shannon's role as the barker and moderator of the actual game of Russian Roulette consists entirely of him standing atop a ladder in a dimly lit room shouting at people, it is comical, though I'm sure entirely intentional. It is a symptomatic of the film in general. I get the impression that we are supposed to feel something, but so little is uncovered in the film, that the people aiming guns at each other's heads may as well be cardboard cutouts. A thoroughly unmemorable film.

Anchor Bay's presentation of 13 is solid.  The image and sound quality are good, but not great. The setting for the film is mostly the drab interior of the mansion in which the tournament takes place, so there's not much flash to concentrate on.  There are a couple of occasions when the action moves outdoors, and the image showcases some healthy detail in those scenes, but it is rather unremarkable otherwise.  In addition, there are no extras, not even a trailer, on this disc. Anchor Bay has picked up some really great titles over the years, and released some impressive Blu-rays, but I'm not sure I'll ever watch this again.

Order 13 on Blu-ray at Amazon