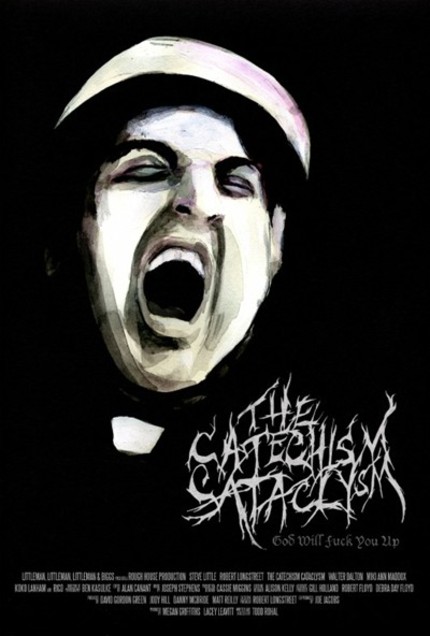 Todd Rohal's The Catechism Cataclysm is one wondrously strange animal, a drily absurd road comedy set in a canoe. Eastbound And Down's Steve Little stars as quite possibly the world's worst Catholic priest on a trip to find himself, a trip that turns progressively weirder the farther he goes in the Sundance selected picture. We ran a conversation between stars Steve Little and Robert Longstreet around the time of the film's Sundance premiere but with The Catechism Cataclysm entering limited theatrical release October 21 and hitting VOD on October 26th we've had the chance to fire a few questions by writer-director Todd Rohal.

What were the origins of the story for you? Are you a Catholic yourself?

I was raised Catholic. I don't know what I am anymore.

This story brewed for a while - it began as an image of ten priests in five canoes lost in the woods at sunset. I scaled that back, pulled the Japanese girls and Huck Finn elements into it and the story began to take shape.

I had been struggling to get another film off the ground for years and then got hit with a serious health condition while simultaneously losing my health insurance. After two major surgeries, the "God Will Fuck You Up" bits of the movie found their way into the story.

At what point did you know Steve was going to be in the lead? How much of this was tailored to him?

The script was written specifically for Steve and Robert Longstreet. I had an outline written up with another actor in mind to play opposite Steve, but that didn't work out and I asked Rob to step in, which then brought in the black metal pieces of the film. The plan was to shoot from the outline, but both guys asked me to write a full script since I had such specific ideas about what was going to happen. I sent them a full script a few weeks later.

A lot of the dialogue between Robert and Steve feels incredibly natural ... did you let them improvise? Did they know each other prior to the film?

Steve and Rob met the day before we started shooting. Steve's been a member of the Groundlings for years and thinks incredibly quickly on his feet. I could simply give him a seedling of an idea and he'd run with it to some far-out places. And Rob is just totally natural in front of a camera. He's the easiest man in the world to talk to, an actor who doesn't stop thinking or creating for his character. He would riff on the script over the phone to me, I'd write down those ideas and integrate them into the next draft.

The dialogue isn't improvised, though - they both deviate from it and come back to the lines, but it was all on the page and those guys just took it to another level and made it their own.

Who is responsible for the title song and will it ever be made available?

That track by John R. Butler is called "The Hand of the Almighty" and it's available on iTunes now. [ed. You can find it embedded below.]

Our composer, Joey Stephens, created a track for the end credits called "My Main Man (Jesus Is)" which we're currently sending out to Christian radio stations.

Why make a road movie in a canoe?

I never thought of it as a road movie - I just didn't want to shoot anything inside of an apartment building. Even if we had been able to hire a script supervisor, I would have drowned him. There was no way to keep continuity as we were moving - and I loved the feeling that our whole crew could have been dumped into the river at any moment. It kept everyone awake and thinking.

You have a major homage to a film that almost nobody has seen at the end of the film, what was involved in clearing that music? Has Katsuhito Ishii seen it?

David Fear ran such an unconvincingly negative review of Funky Forest: The First Contact in Time Out New York, that I went to the theater and saw it immediately. That movie is three hours of beautifully confusing mind-blowing perfection. It's Japan's Tree Of Life.

I found the soundtrack and played it on repeat while driving a moving truck to Austin, Texas. At the same time I was kicking around these ideas for the story and the two pieces welded themselves together somewhere near Memphis.

I'm sure Ishii hasn't seen the movie. The actress in the campfire scene in Cataclysm, Koko Lanham, was the one who tracked down the musicians from the Funky Forest soundtrack in Tokyo and helped us clear the tracks. They thought we were loaded filmmakers from Hollywood. It took some explaining, translating and more explaining, but they eventually came around to understand that we were just as broke as they were and trying to make something on the opposite side of the world that'd be less-seen than their own movie.