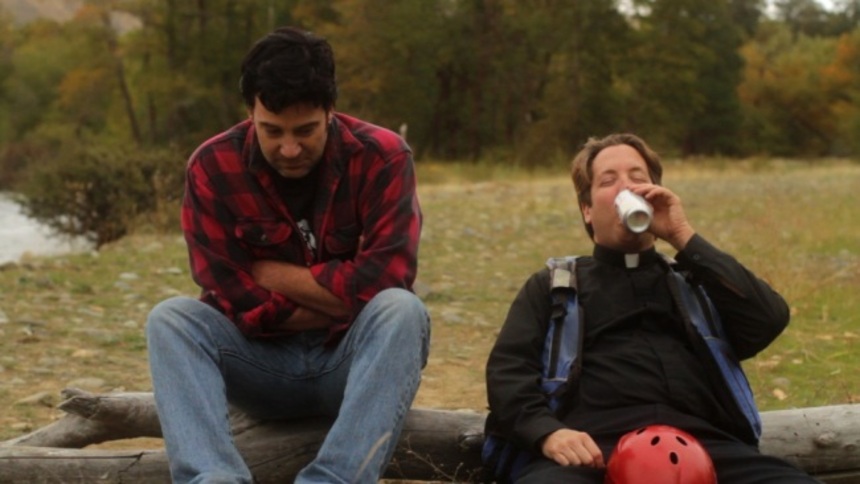 [Todd Rohal is one of the more unsung American independent (with a small "i") filmmakers.  His Sundance entry, The Catechism Cataclysm, is hitting Fantasia today, so here is Todd's review pulled out from our archives.]

Father Billy may be one of the least competent priests ever to wear the collar. Not because he's malicious. Not because he doesn't care. No, it's just that being a decent priest requires you to be an adult and Billy is simply an enormous man-child, completely ill-equipped to serve the needs of his parishioners. His Bible Studies consist of funny urban legends. His preparation time spent searching for silly YouTube videos. His ring tone a heavy metal riff. Whatever the incredibly simplistic and naive Billy may be suited for the priesthood, realistically, is not it.

And so he's sent on vacation. An enforced break of sorts to clear his head and sort out his priorities and try to work out why he wants to be a priest at all. And so Billy sets off into the wild. His plan? A canoe trip down a lazy river accompanied by his sister's high school boyfriend, a bemused man who Billy has idolized since grade school.

And so begins Todd Rohal's The Catechism Cataclysm, a dryly absurd road comedy with the caveat being that they core duo are floating down a river rather than driving along a road. The sophomore feature from the director of The Guatemalan Handshake, The Catechism Cataclysm is also the debut from Rough House - the production company founded by David Gordon Green, Danny McBride and Jody Hill - which should give you an idea of where this is all headed. This is down home Americana re-imagined as gradually escalating dementia with a dark yet still sweetly naive edge.

In the leads are Robert Longstreet - starring in a whopping four Sundance films this year - as the idolized sister's-former-boyfriend Robbie and Eastbound And Down's Steve Little as Father Billy and your feelings about Little as a performer will pretty much determine how you feel about the film as a whole. Which is fair enough given that the role was reportedly written for him. Those who already know they don't like the man need not give The Catechism Cataclysm a second thought because this film simply was not intended for you and nobody is going to take offense when you stay away. But for those in the favor ... well, this takes Little's signature style and pushes him into some surprising territory.

The interaction between Robbie and Billy is what grounds the film and gives it a believable heart, Robbie's bemused acceptance of Billy's hero worship - and later his clear need for that sort of affirmation from another human being - pulls Billy away from the edge of being a caricature, the give and take between the two men instead revealing him as a child who, for some reason, never quite grew up. And as crisis piles upon crisis until things spike to a wildly over the top - and completely unpredictable - climax, it's that early character work that keeps you caring about what happens.

There's a degree of care and detail in the writing - particularly in the stories Robbie tells as the duo paddle along the river - that is surprising, an overall resistance to obvious punchlines that makes the early going a comedy with more smiles than laughs while setting up the big payoff for when it comes farther down the line. And it does come.

Not the biggest film at Sundance by a long shot, nor the flashiest or most extreme, The Catechism Cataclysm is possessed of a gentle charm masking an urge to in your face subversiveness, a combination that is going to make the cult for this film a fervently loyal one.