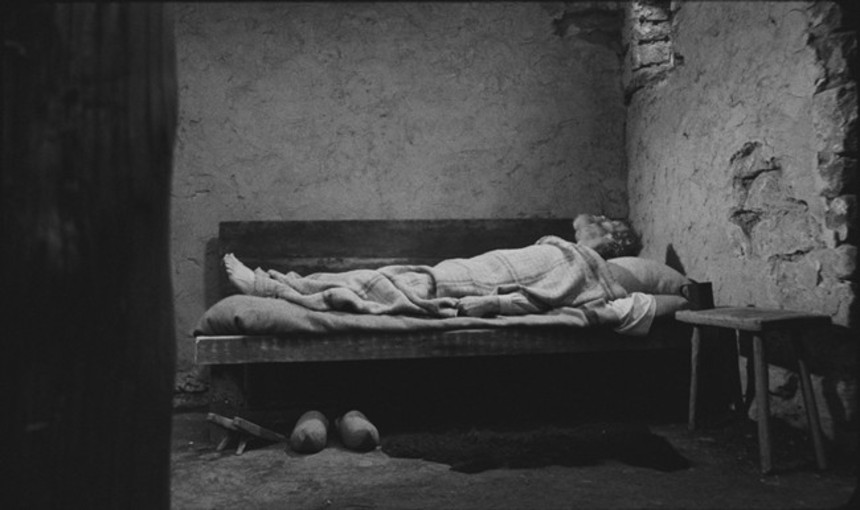 Before I even attempt to review The Turin Horse, I have to make clear that it is only the second Bela Tarr film I've seen, after Man from London. Since Tarr is very obviously the definition of an auteur, it feels like somewhat of a disservice to simply review a movie without putting it into the full context of his filmography, with the added benefit of picking up on his repeating themes and motifs. That said, my job here is to tell you that, Tarr virgin or die-hard fan, you need to see this movie.

Shot in gorgeously sumptuous, haunting, high-contrast black and white, The Turin Horse unfolds over the course of six days. We spend the entire time witnessing the repetitive, highly mundane, painstakingly methodical routines of a father and his daughter in a small house on a prairie in what seems like real time. This device serves to make it all the more strange, and ultimately unsettling as things out of the ordinary do begin to happen each day.

As each day passes by, the simple--at first even humorous--images we grow used to seeing take on an ominous tone. In almost horror-movie fashion, what we don't see begins to frighten and unsettle us just as it does the characters. The wind that howls constantly beyond the stone walls of the house becomes its own character, quietly and steadily threatening to drive them out. Add to this an eerie, insistent loop of otherworldly music that pops up in every other scene like a dripping faucet, and the films mounts to Repulsion-levels of claustrophobia.

But don't get me wrong, The Turin Horse is a slow-moving movie if you don't happen to be enthralled with its rhythms. One obnoxious case in point came in the form of a restless twenty-something girl seated behind me, who continually snickered impatiently, and eventually groaned "Nooooo!" as the title card for "The Sixth Day" appeared onscreen. I did have a sort of heartwarming moment with my fellow cinephiles though, when the movie ended and the same girl loudly declared "Oh thank God!". The majority of the rest of the audience proceeded to clap extra hard while giving her dirty looks as she practically stormed out. It's not for everyone.

The Turin Horse is a stunning masterpiece that gets under your skin if you let it, and while Man from London was excellent, this one made it clear to me why people have always made such a fuss about this Hungarian guy. It's a period piece that feels almost post-apocalyptic, and timeless, all at once. It truly transcends the sum of its parts, lingering in the air like a dream long after its world has gone dark. See it on the big screen if at all possible. And hey, if you don't like it, don't be like the obnoxious girl at VIFF's Wednesday night screening--just shut up, or leave. The rest of us are busy having our lives changed.