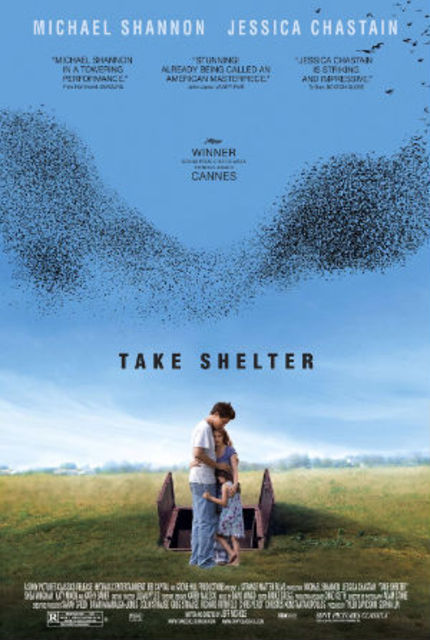 Merely because of his physical bearing, Curtis presents an intimidating presence. His countenance is stolid, almost stern; his gaze is often impenetrable. Yet he's a gentle giant, attentive to his wife Samantha (Jessica Chastain) and six-year-old daughter Hannah (Tova Stewart). He deals lovingly with Hannah, who is hearing-impaired. As is often the case, Samantha is more adept at communicating with Hannah in sign language than Curtis is, yet he doesn't allow any frustration he may be feeling to become manifest.

In fact, Curtis appears to be an expert at bottling up his emotions. He has begun to have troubling nightmares, but he is not the sort of man who will readily share any inner turmoil he may be experiencing with his wife, or even with his best friend and co-worker Dewart (Shea Wigham). Instead, Curtis contains his emotions, and goes about his daily work, and cares for his family, and his personality begins to resemble a kettle of slowly-boiling water. Tiny bubbles begin popping up, and Curtis does his best to let the air out, to calm his interior waters, to defuse the tension that he feels building within his veins, but the temperature keeps rising and the nightmares begin to spread into his everyday life and the damage starts to escalate.

Shannon has been making movies for nearly 20 years -- he debuted in Groundhog Day (?!) -- and I'm only sorry that I haven't seen everything he's ever done. He jumped into the forefront of my consciousness with his mesmerizing, scary performance opposite Ashley Judd in William Friedkin's Bug (he'd done the role first on stage) and it was around that time that he collaborated with writer/director Jeff Nichols on Shotgun Stories. Clearly they're fully in tune with each other; Nichols doesn't give Shannon a showy introduction or keep pushing the actor into the center of the frame or make his lighting different or anything obvious like that, yet Shannon is inevitably the character to whom your eyes are drawn whenever he appears on screen.

Nichols makes sparing use of close-ups and doesn't hurry things along; each scene lasts as long as it needs to make an impact. Yet there is a deep-seated feeling of forward momentum, even as a general sense of foreboding grows. It's rather extraordinary; it's as though you're sitting in a cart in the dark and someone picks up the cart and pushes it from behind; you can't see where you're going and the pace slowly accelerates. It's simultaneously exciting and terrifying.

Chastain, young Ms. Stewart, and the reliable Wigham give performances that make it possible for Shannon to plunge into darkness. Samantha is an especially well-written role, reflecting a modern woman's support of her husband, yet also her insistence on standing up for herself and her daughter, and firm refusal to become a victim; Chastain captures every nuance.

Led by the respective talents of Nichols, Shannon, and Chastain, Take Shelter is an incredibly well-modulated film, a "must see" experience that is as breathtaking as it is disquieting.

Take Shelter is now playing in limited release in the U.S. It expands tomorrow to more cities across the country, including Dallas, TX; Denver, CO; Minneapolis, MN; Houston, TX; and Seattle, WA. It will continue to expand in the coming weeks. Check the official site for more information.