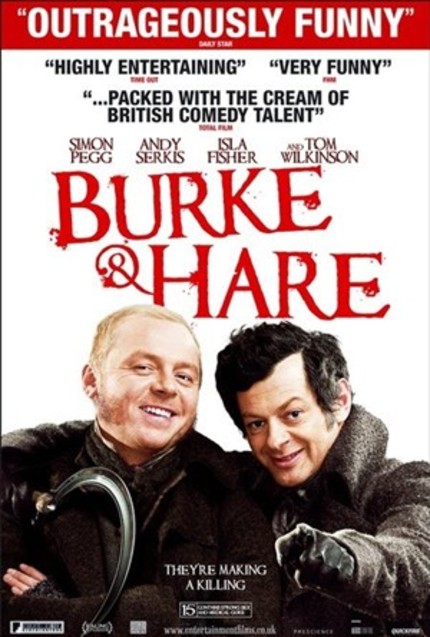 [With John Landis' Burke And Hare now screening in Sitges we revisit an earlier review.]

John Landis' Burke & Hare is one of those films where having watched it, you feel compelled to continually check you did, in fact, enjoy yourself. There's plenty to enjoy. It's an admirably scruffy little period piece based (if somewhat loosely) on the true story of the murdering nineteenth-century twosome who went down in the history books after creating their own supply once the demand for medical cadavers rose sky-high.

It does a nice line in gentle black humour, a spot of light blood and guts, and features some surprisingly memorable performances from the cameos as well as the marquee names. It's just that from the director of American Werewolf In London - not to mention The Blues Brothers, or Three Amigos, or Animal House - it seems oddly, well... restrained.

And it starts to give this impression right from the introduction, where UK comedian Bill Bailey runs the audience through a little exposition as a genial hangman explaining to the camera where corpses end up in Scotland's dour, forbidding capital. Make that a lot of exposition. It's fairly well written, and Bailey is as reliable as can be expected, but it feels like a film hung up on the question of whether American audiences will get it.

Which is jarring in part because it's not as if the plot's that difficult to follow. William Hare (Andy Serkis) and William Burke (Simon Pegg) are a pair of incompetent chancers up to their ears in get-rich-quick schemes and confidence tricks. When their latest goes awry even before it's got off the ground, they return to the boarding house Hare runs with his wife to find the one remaining tenant has just collapsed and died.

Dispose of the body, Mrs. Hare instructs them. As it happens, there's one man in town desperate for bodies; of the two rival doctors in town, Dr. Monroe (Tim Curry) has just used his political influence to block Dr. Knox (Tom Wilkinson) from procuring any corpses for his medical students. When Burke and Hare learn Knox will pay a tidy sum for any freshly deceased citizen they happen to sling his way, they're soon finding natural causes aren't doing the business quick enough to keep the pair in the lifestyle to which they're fast becoming accustomed.

Landis plays the whole thing as a fairly gentle black comedy, basically, with Burke and Hare as lovable rogues with regrettably lax moral standards and both their victims and enemies as a gallery of cartoons no-one would be in any hurry to root for. A revolving door of cameos from British film and television get their five minutes to raise a smile, and Landis scores a talented enough cast they do this very well. Christopher Lee and Paul Whitehouse are arguably the best, but enough swan through the frame that watching the credits to check if you caught them all is quite an experience.

Yet this raises the nagging suspicion the leads aren't entirely doing their job. Serkis and Pegg are both watchable enough, but neither ever seems to project much genuine energy. Hare ambles along treating himself and his wife to the good life, rolling his eyes at Burke's recalcitrance. (Serkis does admittedly seem to having markedly more fun with the role than Pegg.) The other man wrestles with self-loathing over sending so many innocents to Knox's dissecting table, even while he plucks up the courage to romance ambitious showgirl Ginny (Isla Fisher). Yet it's all painted in such broad strokes the stakes never seem particularly high.

The camera only once lingers on anything particularly ghoulish, and the city feels like the backdrop for a television drama (albeit one slightly more lavish than most) rather than an actual rancid, stinking nineteenth-century metropolis. It's a horror film, of sorts, just an almost bloodless one.

Which won't be a problem for many. Not everything needs copious splatter, obviously, and though you might have to mull it over afterwards Burke & Hare is definitely handsomely shot, fairly tightly paced and certainly funny. Most of the humour is pretty obvious stuff, but the cast elevate it effortlessly (most of the principals having done this sort of thing countless times before). The many anachronisms and less-than-subtle pop-culture references still grate, but they're good-natured enough it's difficult to care very much.

Again, some of the performances are even unexpectedly memorable. Lee and Whitehouse's cameos are two of the funniest in the cast, but bizarrely the standout role ends up being British TV institution Ronnie Corbett. The pint-sized veteran gives a startlingly winning turn as the militia captain who takes it upon himself to find out what happened to Burke and Hare's unfortunate victims, Corbett almost stealing the film with the way he manages to blend total seriousness with the subtle impression he's well aware people are laughing at him.

It's popcorn entertainment, basically. Is it a disappointment? Yes, but only to an extent - it would have been gratifying to have something with more bite from a legend like Landis, but there's still an amusing, if uneven little film in here with some real highlights. Don't expect any real belly laughs, or anything more troubling than an old penny dreadful (not for the kids, but nothing to give anyone nightmares) and Burke & Hare still comes recommended.