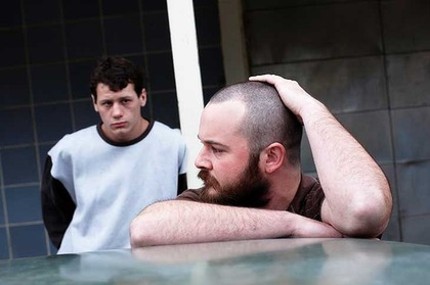 Note to self: do not see films about killing and child abuse first thing in the morning. It will ruin your day. Which is to not to suggest that a film about such subjects is bad; far from it. When I left the screening of Snowtown the other morning, I immediately went and sat outside in bright sunshine and watched happy children playing for several minutes to regain my composure. Such was the raw power of the film, an intimate tale of one of Australia's worst serial killers and the effect he had on one particularly vulnerable teenager.

Jamie lives with his mother, Elizabeth and younger brothers just a few steps from complete squalor in small town Australia. They live that kind of existence where they have too much stuff, but nothing of value, and only eek out an existence. When the seemingly nice man across the street turns out to be a paedophile, convincing the boys to pose for him in their underwear, Elizabeth reports him to police. The along comes John, like a knight in shining armor. He cares for Elizabeth and the boys in a fatherly way, and is willing to act as vigilante against those who hurt children. But it slowly becomes clear to Jamie that John likes the killing, and what at first is taking justice where the police fail becomes an excuse for torture and murder.

The film is shown mainly from Jamie's perspective. Jamie is a terribly vulnerable and sensitive young man, with absolutely no support system to save him from those who would abuse him on all fronts. And abuse does come in many forms. His community is poor, his family lives off welfare, the police never make an appearance, nor do social workers. The filming is rough, matching the atmosphere of the film, and the audience frequently feels as abused as Jamie. All the actors are incredibly natural and real; the film is meant to have an improvised feel, and it does. There is little sunshine, and little color in the film or in the characters' lives. At times, the film feels a little long, but that could be because the material is so terrible to witness that you wish it to be over. John's infiltration of the community is long and gradual, and his turns Jamie before Jamie is even aware of it. And once he is, he is powerless to stop it.

Lucas Pittaway as Jamie, and Daniel Henshall as John, provide the perfect balance to each other. Pittaway shows us a boy who life is slowly being pulled apart before our eyes, with no one to turn to do try and stop it. We know that if someone could just speak to him, to tell him it's okay when he knows that this is wrong and he can get away - but where to? Henshall is a perfect match for this, coming in as a the good guy, organizing community meetings, making sure all have their turn to speak, and yes, he hurts people, but those people deserve it, right? But as the minutes pass, his mask begins to slip, and we can see the evil inside. His abuse is almost worse, as it is emotional and psychological. In each consecutive scene, Henshall exudes the requisite charm required to seduce a boy like Jamie, and the subsequent manipulation to violent acts that makes the audience want to jump into the film and drag Jamie away.

That this film is based on true events makes it all the more terrifying and terrible to watch. While the film is about the seduction of the vulnerable, it is not seducing, which is the correct form such a story should take. I was amazed to discover that this is screenwriter and director Justin Kurzel's first feature film; he shows an incredible maturity and control over such sensitive and difficult material. It is an incredibly well-crafted, well-acted, and deeply affecting film.