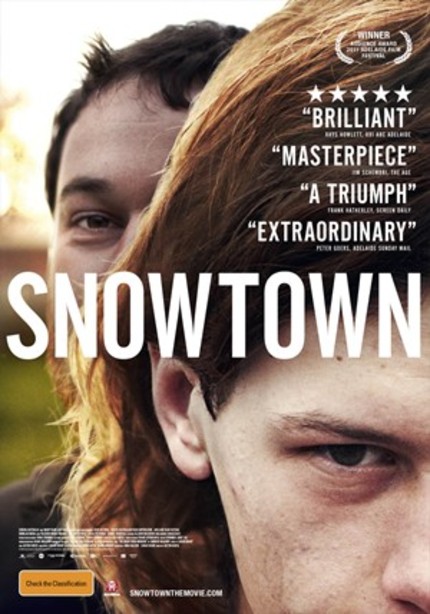 Snowtown is an intense thriller/drama that chronicles the real life murder spree piloted by John Justin Bunting, Australia's most prolific serial killer to date. The film focuses on James Vlassakis, the son of a friend and possible lover of Bunting's. The impressionable teenager, who the film alleges was physically and sexually abused by both his family members and by his neighbors, looks up to Bunting as a father figure. When Bunting begins his crusade against pedophiles and homosexuals, the vulnerable Vlassakis gets swept up in quasi-ideologically driven hate crimes and finds himself playing a part in the unthinkable.

Unfortunately for Snowtown, it will ever be compared to last year's remarkable film, Animal Kingdom. To be honest, I wouldn't be surprised if aspects of the Snowtown murders served as a partial inspiration for Animal Kingdom in the first place. Not only are both films Australian, they both explore themes of crime and murder, family and community and deal with a boy coming of age surrounded by the worst possible influences. Both films give us protagonists who are young, innocent, susceptible and stoic. Finally, they are both biting and fierce with a driving tone that keeps you on the edge of your seat. These are all things both movies set out to do and since both films accomplish this at a very high level it would be hard to say much bad about Snowtown either.

The only problem for Snowtown is that Animal Kingdom did it first and does it all better. Snowtown has pacing issues. It is too long and is full of too many scenes that feel more like interstitials than active and important parts of the story. These short scenes add little to the character development and instead they merely seem to exist as bridges between the vignette like sections of the film. The movie succumbs to the same shortcomings that many biopics exhibit - there is too much story and too long of a timeline to fit into one move and so we only get snippets in between large lapses in time.

That being said, all these complaints are nit-picky and minor. I very much enjoyed the film. Had I not seen Animal Kingdom so recently, this review would be absolutely glowing. The characters are real and fascinating. The situations are mind blowing in how over the top they are and yet understated and subtle at the same time. The pregnant pauses are full of suspense and drama that are remarkably effective and despite his actions, Vlassakis remains surprisingly sympathetic and relatable. In the end, I definitely recommend this film - but with the caveat that you should only see if it you saw Animal Kingdom, loved it and want more of the same. If you haven't seen Animal Kingdom, go and watch that instead.