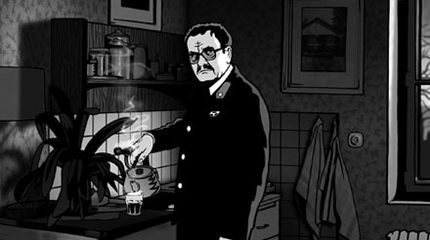 Graphic novels might have a reputation for frivolity, but they also have been proven to be very good for dealing serious topics that require the kind of creativity offered to deal with trauma. Art Spiegelman's Maus and Joe Sacco's Safe Area Goražde both look at people and places of war, and their combination of words and images have proven powerful and successful. The animated documentary Waltz with Bashir extended our idea of how a true story could be told. Tomás Lunák's feature film debut Alois Nebel is not a documentary, but it is an adaptation of a graphic novel, and is based around real trauma. Animation does not have to be Disney or Pixar; as this film proves, it can be just, if not more, haunting and effective in its delivery.

Alois is a taciturn train station manager working in a small town on the Czech-Polish border in the late 1980s. As the film begins, the iron curtain is beginning to fall, and memories of childhood, the fall of said curtain across Europe, and the traumatic effect it had on Alois come flooding back. Meanwhile, a mute man running through the woods is captured, and Alois finds himself in a mental institution with said man, trying to sort through the fog of his mind. After Alois is released and he is left jobless and alone, he tries to find meaning again.

The film feels like a strange version of a European art film, concentrating on character development as oppose to cause-and-effect narration. By using black-and-white rotoscoping animation, this concentration on character is heightened, as the animation allows the audience to be inside Alois and see the world as he does, through the filters of his mind. There is a great melancholy in the grey tones, and in Alois' world it seems to always be either raining or snowing. For a man whose life revolves around the regularity of train schedules, the surreality of the animation adds to the confusion of his past and the uncertainty of his present and future.

Another effect of the animation is a kind of neutrality of character that allows the audience to feel a part of the story. The less defined it is, the more a viewer can see themselves in the various characters and settings. And while the lack of color and the mystery of the mute man gives the film something of a noir film, it runs much deeper and leans more towards a German-style expressionism. Even the inanimate objects take on a strange life. This life, though, is sad and bleak. The lives of most of the characters are miserable enough that you are shocked at the joy they can find in small things. But they must, and that is the hope of the film. In this place and time, joy must be found in the small things and moments.

The bleakness of the story is somewhat nullified by the quality of the animation; the rotoscoping matches its graphic novel origins. This is not surprising, considering that Lunák has a background in directing animated music videos, and one of the novel's authors, Jaromír 99, was in charge of art direction. And this kind of story lends itself to this mode of storytelling. It is a self-contained metaphor, a dark fable, and it is in fables that we find the saddest truths.