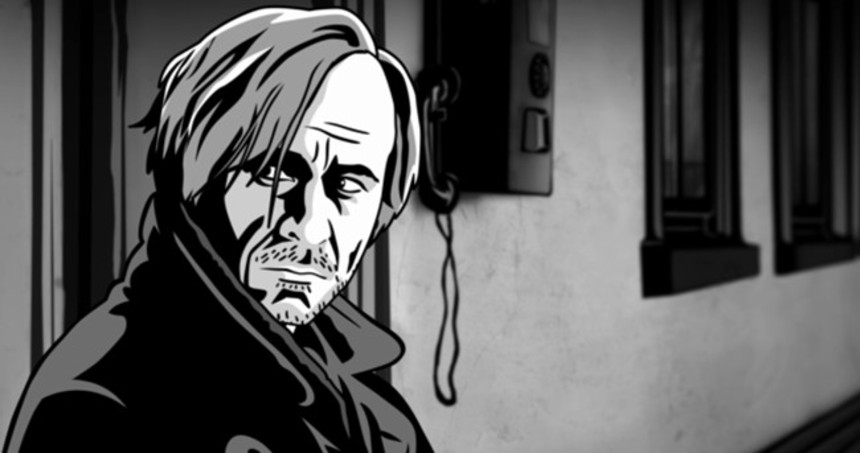 We first caught wind of Czech animated feature Alois Nebel all the way back in 2008. Producers and director Tomáš Luňák promised a rotoscoped adaptation of the popular graphic novels by Jaroslav Rudiš and Jaromír 99 and they had released an animation test that was enough to convince that this could be something very special indeed. It's now three years later, production is coming to a close with the film targeting an October 2011 release in the Czech Republic, and the first official teaser has just arrived. And, good lord, this is fabulous.

The end of the eighties in the twentieth century. Alois Nebel works as a dis­patcher at the small railway station in Bílý Potok, a remote village on the Czech-Polish border. He's a loner, who prefers old timetables to people, and he finds the loneliness of the station tranquil - except when the fog rolls in. Then he hallucinates, sees trains from the last hundred years pass through the station. They bring ghosts and shadows from the dark past of Central Eu­rope. Alois can't get rid of these nightmares and eventually ends up in sanatorium.

In the sanatorium, he gets to know The Mute, a man carrying an old photograph who was arrested by the police after crossing the border. No one knows why he came to Bílý Potok or who he's looking for, but it is his past that propels Alois on his journey...

The observant among you will have already recognized Karel Roden as The Mute in the still above and while things look impressive at rest just wait until you see them in motion. Check the teaser below.

Visit the official site
Thanks to Mandelbrot for the heads up.