Grimm Up North 2011: BY DAY AND BY NIGHT review 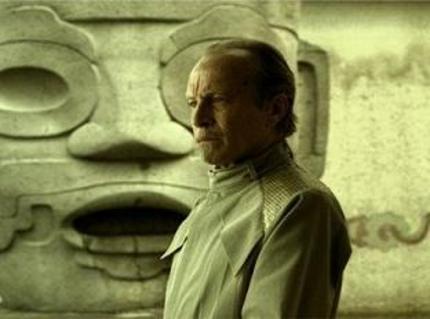 Alejandro Molina's By Day and by Night is the kind of bittersweet little fable that only an arthouse film could come up with. The plot does hinge on a patently ridiculous idea Molina could probably have done more to ground - an over-crowded city where each half of the populace is only allowed to remain awake for alternating twelve-hour shifts. It relies a little too often on enigmatic meditating on airy philosophical concepts, and doesn't quite have the skill to marry its vision with its limited budget. But the story of a family separated across the divide is a profoundly moving one, helped by some tremendous, beautifully moderated performances from the three leads and some memorable direction from Molina that's intimate and epic by turns. This is definitely cinema as serious business, and the mannered, classical tone won't be for everyone even before you take its flaws into account, but By Day and by Night is great stuff nonetheless.

One plot thread follows Aurora (Sandra Echeverria), who lives during the day. A good citizen, she's never thought to question the government who put the strange diktat that controls her schedule in place. But then her daughter Luna (Gala Montes de Oca) vanishes, and Aurora's grief jolts her out of her rut, convinced there's more to Luna's disappearance than is immediately apparent. On the other side of the divide is Urbano (Manuel Balbi), a medical technician by night, who discovers Luna's corpse then realises the girl isn't actually dead. Someone has tampered with the biological mechanism that governs when she wakes up - switched Luna from day to night, in other words. As Aurora draws closer to uncovering what's actually happened, an elderly scientist from the ruling elite has been charged with finding out who's actually trying to upset the shift system. The question becomes is he about to betray the fledgling family unit to the authorities, or is he trying to help them escape the city for reasons of his own?

Let's reiterate that By Day and By Night is the kind of sombre viewing experience many people will feel is the epitome of arthouse pretentiousness. Molina and co-writer Robert Garza do treat their story like holy writ, with precious little levity or humour. For most of the running time, no-one bar Luna even cracks a smile, at least one that isn't hiding something. The production design looks like a tribute to the glory days of 1970s space operas, all antiquated futurist visions many will find laughably kitsch. And while Molina and Garza dabble in any number of fascinating subtexts - control versus freedom, the dangers of social engineering and scientific experimentation run riot, the enduring nature of the parental bond - the duo are clearly not interested in an extended debate on any of these. This is fine up to a point, but there are times their refusal to actually provide any answers does become less elegant suggestion and more teeth-grindingly obtuse.

A lot of this seems down to Molina having made the film he wanted to make, though. The visuals are wilfully, puzzlingly out of time, and there are times you tire of endless grey stone monoliths that don't serve any practical purpose or costumes that look like something off an amateur dramatics take on Babylon 5. But the mood works more often than not; it's very clear you're not supposed to be nitpicking, that this is a fable set in a world that's not exactly real as such. If you can suspend your disbelief the tight jumpsuits, clean, cold architecture and rickety computer terminals do make for an immersive visual environment, like some kind of idealised concept artwork come to life. By Day and By Night is often very beautiful in a stylised, highbrow sort of way, especially the wheeling aerial shots of the city that bookend significant plot progression. It's retro as something alien and otherworldly rather than a pejorative.

The three leads do a great deal to humanise things. The story may trade in very heady emotions and there's few opportunities to crack jokes, but Aurora and Urbano react to each new plot development in plausibly dramatic ways. Echeverria's grief is maybe short on proper context - you don't see enough of what Aurora's relationship with her child was for her tears to have the effect they ought to - but the actress manages to strike just the right note between studied melodrama (the way her performance says look at me, I am crying) and spontaneity (you don't expect her emotions to be quite so raw, so sudden, so open). The way her relationship with Urbano develops is genuinely wrenching - once she finds his house she can see or touch him and Luna, but never talk to them, bar leaving video messages for them to find once they've woken up. The breathless desperation of it all coupled with dreamy swells on the soundtrack does threaten to get a bit much, but thankfully little Gala Montes de Oca proves almost as capable as her older co-stars - Molina and Garza don't give her nearly enough to do, but the young actress' light-hearted smile takes the edge off the more straight-laced scenes.

Slow, opaque and posing many more questions than it ever answers, By Day and By Night certainly isn't for everyone. Much of this is obviously by design, but the filmmakers could definitely have done more to flesh out their world and its backstory without compromising the mood they try so hard to maintain. Still, for any fan of slower-paced speculative fiction that deals in myth-making more than actual hard science, Alejandro Molina's film is unquestionably worth a look. By Day and By Night doesn't quite measure up to its peers, literary or cinematic, but it gets far closer than most. If the set dressing occasionally raises a smile or the dialogue reads a little too verbose, the silences and the leads' emoting still move to the rhythms of a Borges or Murakami and that - especially the wonderful final scene - is what stays with you. Contemplative, haunting and ultimately deeply human, for all its faults By Day and By Night still comes strongly recommended.

(By Day and By Night was screened as part of Manchester's horror film festival Grimm Up North 2011, which ran from 6th-9th October at the AMC cinema, Manchester, UK.)