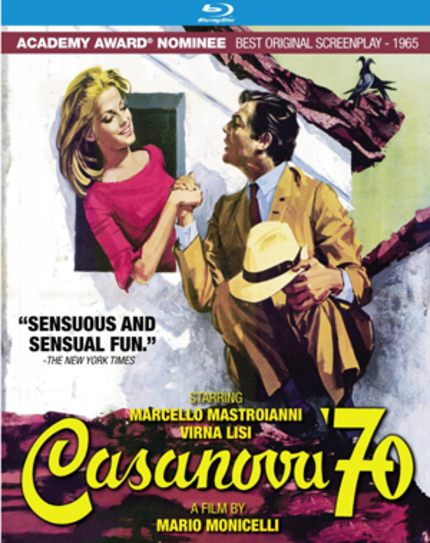 Marcello Mastroianni is one of the finest gems ever to grace the big screen.  He has charm and wit to spare, and his portrayals on screen seem absolutely effortless, even when they are mired in histrionics. Luckily for us, Mario Monicelli's Casanova '70 is not one of those films, it is a light, sexy comedy that pushed the boundaries of decency in a way that the Italian film industry was better at than anyone. There are numerous beautiful starlets adorning this wonderfully fun feature, but none of them outshine Mastroianni, which is a testament to the light he brings to this film.  I wish I could say that the HD image of the film was as impressive as the performances, but it is a bit uneven in its presentation with several problematic areas. It isn't enough for me to condemn this one outright, but it fares about as well as Kino's previous Ponti Blu-rays.

Nominated for an Academy Award® for Best Screenplay, Casanova '70 is a raucously funny sex romp starring Marcello Mastroianni at his charismatic peak.

Directed by Italian comedy legend Mario Monicelli (Big Deal on Madonna Street), it finds army officer Andrea (Mastroianni) dealing with a particularly strange case of impotence: his libido only gets aroused in the middle of near-death experiences. So while candle-lit dinners leave him cold, a female lion tamer or a General's wife expand his lust to dangerous proportions. After a visit to a psychoanalyst, he fears his vice will lead to an early grave, so he attempts to live as a celibate with the virginal beauty Gigliola (Virna Lisi), but he is only delaying his inevitable descent back into sin.

Packed with bed-hopping hijinks, a parade of gorgeous actresses, and Mastroianni's hilariously dry wit, Casanova '70 is a colorfully ribald gem from the Golden Age of Italian comedy.

Mastroianni's amorous army officer is a joy to watch as he actively engages his potential conquests, only to fall flat when the level of risk doesn't rise to the occasion. He encounters one beautiful woman after another, each of them throwing themselves at him in a way that mere mortal men can only dream of, and he inevitably finds that he cannot deliver the goods unless his life is in danger.

The mix of Marcello's dry wit and incorrigible behavior and the direction and music of this film make it a rather jaunty two hours.  The film never slows its pace and never feels as long as it is.  It certainly doesn't hurt that Carlo Ponti managed to wrangle some of the most beautiful women in Italy to play opposite Mastroianni. Just as you may be getting bored with one lusciously buxom beauty, he throws another one your way.  This happens half a dozen times or more, each one more exotic and ravishing than the last. The idea that each of these mesmerizing beauties would throw themselves at Marcello Mastroianni is no huge stretch, hell, I'm straight as an arrow, and he probably could have charmed me out of my pants in half a minute flat.  The beauty of this film is in watching Mastroianni do what he does best, and that is to seduce the women on screen and everyone in the audience with his smooth, effortless charm.  Mission accomplished.

I wish my thoughts about the presentation of Casanova '70 on Blu-ray were as kind as my thoughts about the film itself.  Earlier this year Kino released a collection of Vittorio de Sica films starring Mastroianni and Loren, I reviewed a couple of them and found them to be generally lacking in the picture department.  Unfortunately, this disc doesn't fare any better.  There are instances where the image is crystal clear and there is sparkling HD detail in facial close ups, but medium and wide shots lose that edge, at times shadowy areas of the image even appear to exhibit digital artifacting, something I'm not used to seeing on Blu-ray discs.  The image isn't bad throughout, but it is uneven enough to wonder what is going on with the sources for these transfers, since I imagine they all came from the same place.  Fortunately, the audio fares much better, with a crisp and bouncy DTS-HD 1.0 Mono track that balances the music and dialogue very well with no noticeable hisses or pops, so that's a relief.

The only extras included on the disc are theatrical trailers for this and the other Italian classics from Kino, and a stills gallery. In this case, because the film is so wonderful, I'm not terribly concerned.  Combining this package with Blue Underground's The 10th Victim and it's Mastroianni documentary is an evening in heaven for me.

I'll give this one a cautious recommendation.  It can be found on Blu-ray as a stand alone disc, and on DVD in Kino's "Great Italian Directors Collection", and not separately.  If you are also interested in Boccaccio '70 and Antonioni's Story of a Love Affair, that may be the way to go.

Order Casanova '70 on Blu-ray at Amazon