Call It Overhyped, But ATTACK THE BLOCK Is Still Pretty Terrific (Blu-Ray Review) 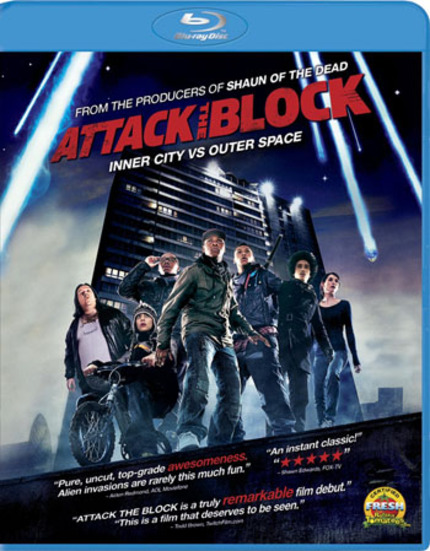 Title of this review aside, I'm not about to spend much in the way of intellectual effort in dealing with the altogether valueless question of whether Attack the Block was overhyped, hyped, underhyped, or any other value in that whole continuum. I sought Joe Cornish's feature writing/directing debut based on kind words directed towards the movie by critics I respected and (most importantly) because it had a killer pitch that made it sound like something worth my time and money. Speaking for my own experience with the movie: I was floored. Cornish's "young hoods vs. aliens" movie was tightly-constructed, funny, vicious, brisk, well cut, had some terrific shots, a spectacular lead performance by young actor John Boyega, and a terrific arc that allows the whole alien invasion premise to be a backdrop for actual human emotion and character development.

For those of you unfamiliar with it, Attack the Block gets its start as its young heroes, a gang of teen thugs in a British tenement, are in the middle of mugging a young nurse named Sam Jodie Whitaker (Venus) when they're all interrupted by a flaming object falling from the sky. A toothy little creature scurries out and attacks the gangs leader, Moses (Boyega), and the boys take pursuit, battering the thing to death. What Moses and company don't know is that their alien isn't the only one making a visit to their block that night, and before you know it, a dozen or more black, eyeless, shaggy monsters with glow-in-the-dark teeth are after them, tearing through anyone and anything that gets in their way.

Attack the Block would simply be a pretty good and gory sci-fi flick if it wasn't for the acting and chemistry of its young heroes, and again, I'm singling out Boyega here. As Moses, he has to follow the arc of a vicious little thug who figures he can simply make it by being the meanest one with the hardest scowl to realizing that his actions have consequences, that for good or ill, he's responsible for the people around him. There are two moments in particular where this epiphany hits him, the first time in guilt and the second time, well, I won't spoil it. But if you aren't just a little moved by the final scene, then I don't what else you need. It's not exactly a complicated arc, but then it's not supposed to be--it just grabs you with its simplicity.

And I don't intend to short-shrift the rest of the actors, but Boyega is front and center the star of the show. The rest of the teens in the film were, at the time, either complete novices or only had a couple of minor credits under their belt. Each of them effortlessly does the hard work of selling a lifelong rapport of friends and partners in crime. Likewise, the seasoned adult cast fares well, but it's not really their movie, is it?

The creatures might be a deal breaker for some viewers. From one of the Blu-ray's several behind-the-scenes docs, I learned that they were a combination of a man in a suit, CG, and a rotoscoping-like process that flattened them out in the attempt to remove all texture and make it appear as though they're absorbing light. I like that the unnamed creatures are physically plausible as far as this kind of thing goes, and they meet two of my most important criteria for creepy crawly things: that they represent something I haven't seen onscreen before and they don't break the spell of the rest of the movie anytime they're around.

I'll admit it: I was crazy about Attack the Block. I thought the kids were terrific in their roles, it had a cool, visually arresting new monster, and it wasn't afraid to get very violent with both its adult and underage cast. I'm not sure what else you're looking for, but to me, that spells a great time at the movies.

As for the actual disc, Cornish's over-saturated visuals come through quite nicely on this disc. One minor gripe, comes towards the middle of the movie when the absolute black employed for the aliens resulted in one or two instances of artifacting. Nothing major, and actually, you'd have to keep your eyes peeled to notice it, but it's there.

Attack the Block is available on DVD, Blu-ray and VOD now.