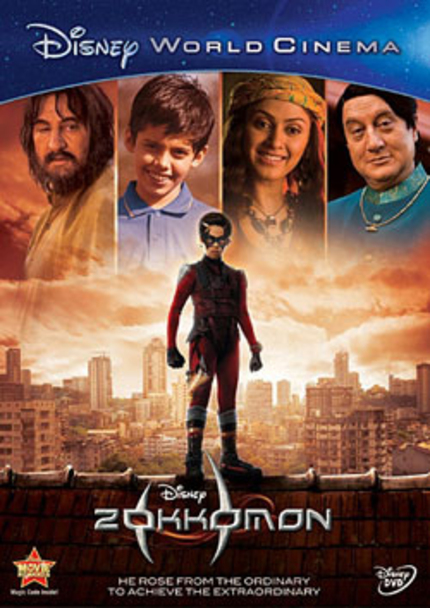 The superhero film has become a summertime staple of Hollywood, yet this big time moneymaker has never managed to really catch on in Bollywood in quite the same way.  There have been a dozen or so caped crusaders in India's long cinematic history, and only a few of those have made any kind of impact.  There was 1987's Mr. India starring Anil Kapoor (Slumdog Millionaire), which was kind of a Superman/James Bond hybrid; following that many years later was 2006's Krrish, starring Hrithik Roshan, which was a huge hit. Those two are really the only genuinely successful superhero films in Hindi film history, for some reason they just don't catch on.  So, leave it to Disney to try again in 2011 and actually come up with something like a success, even though it didn't exactly set the box office on fire.

Zokkomon is the story of a young boy, Kunal (Darsheel Safary of Taare Zameen Paar/Like Stars on Earth), who has lost his parents and is sent to live with his dastardly uncle Deshraj (Anupam Kher of Bride & Prejudice), who runs a corrupt boys school in the secluded hamlet of Jhunjhunmakadstrama.  He uses the local guru to keep the townsfolk in check and keep his pockets lined by stealing the school's funds.  Deshraj discovers that Kunal is the holder of a very lucrative trust fund, one which would be passed on to Deshraj should Kunal perish.  Since he's a decent sort of guy, Deshraj merely takes Kunal far from Jhunjhunmakadstrama and abandons him, assuming he'll never find his way back, returns to town, claims Kunal is dead, and claims his $7,500,000 rupees.  A classic mistake.  Only now, Kunal has time to encounter wondrous strangers, including Anupam Kher playing a scientist from Jhunjhunmakadstrama in exile, who can change his fate and imbue him with fantastical powers through the power of science!  Or something like that.

The story is actually pretty cute.  Safary has this big toothy (braced) grin for most of the film, which would undermine his pathos if the film weren't so damned fun, even in its darkest moments.  At a breezy ninety minutes, Zokkomon never overstays it's welcome, something which is a common problem among most Hindi films, even those aimed at children.  If I had to compare it, I'd say it was similar tonally to the first Spy Kids film, only with less goofy antics, and more emotion.  The targeted age range is about the same, and honestly, if your kid isn't averse to subtitles, I'd much rather them watch this one.  The film stresses the importance of science over mysticism, and tries to teach, sometimes a bit too much, that there is plenty of mystery in the natural world and it isn't necessary to believe what someone says just because they have spiritual seniority.

To that end, Kunal becomes Zokkomon, a kind of superhero of the rational.  As Zokkomon he encourages kids and parents alike to learn about science and to question their guru when the things he says don't make sense.  In all likelihood, this is a propaganda film to encourage Indian children to take interest in math and science in school, but really, I can forgive that, there are worse messages to send.  Zokkomon is every kid's dream, an eight year old who becomes a superhero, who wouldn't like that? My son ate it up!

Zokkomon is filled with colorful, uptempo music and dancing, positive messages, and just enough menace to keep it interesting, but not quite enough to really scare anyone older that eight.  I liked it a whole lot more than I thought I would, and I think it would be a great way to encourage kids to try out films with subtitles, if they aren't sold on the idea.  This film earns a surprise recommendation from me.

Order Zokkomon on DVD from Amazon.