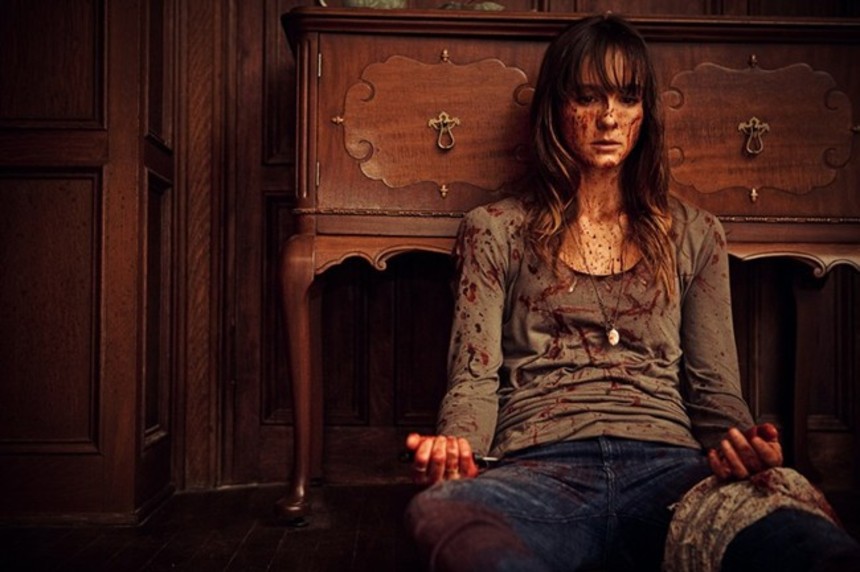 Welcome to the family reunion from hell. The Davison family, as wealthy and dysfunctional as any family can be, are getting together to celebrate the wedding anniversary of mom and dad. And while Crispian (AJ Bowen) warns his new girlfriend Erin (Sharni Vinson) that things could get tense - that they don't always get along - nothing could have prepared her, or any of them for what lies in store.

You see, while Crispian is correct and a shouting match breaks out between him and his brother Drake (Joe Swanberg) mere moments after the family sits down to eat the tumult between the brothers is soon overshadowed by the crossbow bolt that smashes through the window. Followed by another. And another. And another. The family is under attack by unknown assailants and clearly this night is intended to end with all of them lying dead on the floor.

But the assailants didn't count on Erin.

A delicious inversion of standard slasher tropes and the mumblecore world that Wingard has flitted around the edges of for years - Swanberg is only one of a number of mumblecore figureheads hunted here - laced with brilliantly outrageous dark humor, You're Next takes the typical slasher survivor girl and flips things on end by making her into a badass. Fuse a Friday The 13th movie with Home Alone and First Blood with a dash of Tomas Vinterberg's The Celebration and you're in the right neighborhood.

Director Adam Wingard has one a lot of praise through his young career for making a lot of a little, for crafting impossibly stylish pictures on impossibly tight budgets. His work is edgy and character driven and dark. And all of this continues to be true with You're Next but now he shows us something that he's previously kept just to his short films: Wingard and his writing partner Simon Barrett are funny fucking men. And, more importantly here, they're funny men who now how to execute a laugh without damaging in any way the visceral shock of the violence they employ. The horror is horrific. The blood laid on thick. Every jump works. And yet this thing is also laugh out loud funny from start to finish. Also new to the Wingard bag of tricks: Action. The kills aren't just bloody, they're clever and tightly orchestrated often employing complex visual gags that set the audience up early before driving it home with a bloody flourish.

If Adam Wingard's You're Next somehow fails to vault the talented indie director and writer Simon Barrett to the next level of commercial success, if it fails to make Wingard an immediately recognized name within the horror community, then something is very wrong in the world. Likewise, if You're Next fails to plant its star Sharni Vinson on the top of every Hollywood casting agent's list of young talent then the only possible conclusion will be that every casting agent in Hollywood is utterly blind.

An enormously entertaining film You're Next deserves to be, well, next. This is the film that declares - and declares loudly - that Wingard isn't just an indie darling, that he is a director that can kick a mainstream audience's ass and make them fall in love with the experience. You're Next is this year's Insidious, Stake Land or House Of The Devil. It is the clear high point of American indie backed genre film for 2011. And with the indies beating the tar out of the studio backed fare in terms of quality in the horror arena for a good long while now that translates to being the best American horror picture of the year, period.