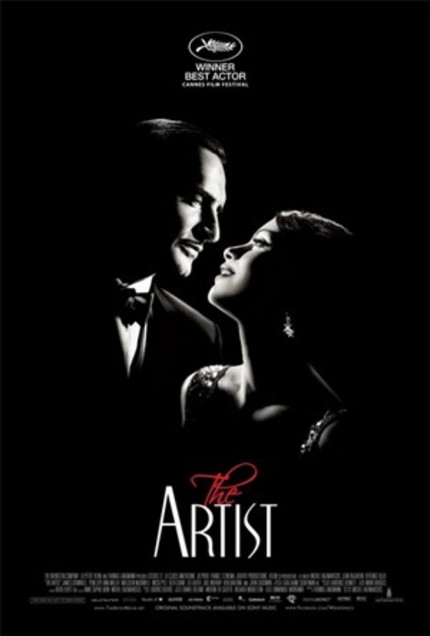 [With The Artist about to arrive in Toronto we revisit our earlier review of the film from Cannes.]

When director Michel Hazanavicius turned heads with his 2006 sophomore feature OSS 117: Cairo Nest Of Spies, who would have guessed that just five years later he'd be debuting his fourth feature in competition in Cannes? But Hazanavicius had two weapons in his arsenal that led directly to where his is now, currently riding a wave of acclaim with one of the most unique and entertaining films of the competition lineup. He had an uncanny ability to recreate past eras of cinema on screen. And he had star Jean Dujardin. And both have served him well in The Artist.

Dujardin stars as George Valentin, the leading screen star of the silent film era. George is riding high, his films beloved by the masses and his common touch making him hugely popular. Following the premiere of a new hit film George has a random encounter with Peppy Miller, a young woman with dreams of stardom. George gives Peppy a hand on her path - a small one, but significant - setting the two on diverging courses as the most prominent faces of their respective ages.

For what George doesn't know is that the silent era is just about over. The talkies are coming and though he may scoff at the potential of this new technology and refuse to play along the industry is changing and anyone who won't adapt is left behind. And so George falls hard as Peppy rises, the girl's natural charm making her an enormous success in the rise of talking pictures.

With the OSS 117 films, Hazanavicius turned his visual skills to recreating the spy movies of the late sixties and early seventies. Those films were remarkable recreations of the era, films that felt like organic products of the period rather than later copies. And now he applies that exact same approach to the silent film, with the exact same result.

The Artist is a beautiful recreation of the silent era. Presented in a 4:3 aspect ratio and shot in gorgeous black and white, it is presented as a film from the late 1920's would have been presented. Even the score feels as though it could have been lifted from the era and, yes, dialogue is presented on title cards. But more than just a recreation of the era, Hazanavicius has created here a clever meta-commentary on the history of film and the movement from one technology to another. While the aesthetic remains period throughout the structure is deliciously post-modern as he moves away from the films that Valentin stars in and into the story of his characters fall from fame.

Working in the silent format allows Hazanavicius to cast purely by look and physical ability without needing to worry about language or accent and the results are fantastic. Dujardin again takes the lead - and again proves that he simply has a remarkably timeless movie star quality to him - while Berenice Bejo glows as Peppy. Also in the mix are John Goodman - a perfect choice as the hard driving studio head - and James Cromwell as George's faithful driver. The entire cast fits perfectly into this world, everyone adapting their acting styles smoothly to the demands of the format without ever slipping into parody.

Though The Artist could stand to undergo a bit of judicious trimming - silents were generally short for a reason and Hazanavicius tends to belabor his points more than necessary - the film is one of the most unique and charming efforts of the year and certainly one of the most pleasant surprises of Cannes.
Tweet Post Submit