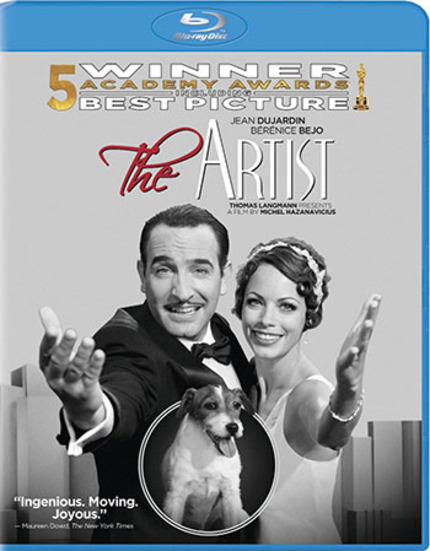 I have to admit that it's nice being able to consider director Michel Hazanavicius' film five months away from the annual best of horse race. It felt particularly nasty this year, the question of whether or not The Artist was worthy of taking home the trophy being at the core of the discussion. Wading into that whole argument would have further exposed my ignorance of silent era film more than I will in the following paragraphs, but would have also, possibly, in some minor way fueled the ridiculous argument about which Hollywood product should Hollywood celebrate.*

In fact, for much of its running time, The Artist is a perfectly serviceable ode to a bygone era of Hollywood without celebrating it so much as pouring out a magnum of Moet on its grave. But thanks to performances by lead Jean Dujardin, it feels like something more than that. The actor gives his dashing one-time silent star George Valentin heart (and a minor streak of cruelty, more on that later), making the whole thing more buoyant than it has any right to be.

When we start the film, Valentin is on top of the world following the smashing debut of his latest movie. And while the premiere offers him the opportunity of a meet-cute with a would-be actress Peppy Miller (Bérénice Bejo), it also fuels an already overblown ego that can't see that the still nascent talkies are about to take off in a big way. It's what studio owner Al Zimmer (John Goodman) tells him, and I'd have a hard time believing that deep down, right from the start George didn't see it for himself.

The sound boom is fortuitous for Peppy, whose star rises in the new style as George's fortunes crash precipitously. There's obvious flirtation between the two, but between George's wife and George and Peppy's respective egos, there's simply no room.

You know what they say, it's not the road, it's the journey, and how The Artist navigates its way through George's riches to rags to what's next tale is using warmth for its lead character (even if he he's not always as warm as he should be to others), and making us root for him to survive.

I alluded to a minor streak of cruelty throughout the film, and that's mostly from George who casually destroys his marriage with this wife who really only seems to commit the sin of wanting her husband to talk to her (get it, the silent actor won't talk). It's all born from George's pride, but for some reason this just felt unexamined in the story, and by the conclusion, as much as I was on Valentin's side for him to make a comeback, I couldn't say that I was with him 100%.

Bejo is fine in her role, although the actress, with her sharp, model-like features, feels a little out of place in the production. James Cromwell will just break your little heart as George's long-suffering chauffeur Clifton, and I'll confess to being a sucker for a cute dog in a movie, but George's frequent co-star and seeming best friend is adorable and softens our hero's rough edges a bit more.

By the time The Artist reached its final scene, I can't say that I'd seen some kind of revelation or deep exploration of silent film (it's clear that's not really what the film's writer-director Hazanavicius was really going for anyway), but I did find a pleasing enough story about movies, about storytelling, and a long ago era of filmmaking that's worth revisiting.

The disc includes a blooper reel (02:14), The Artist: The Making of an American Romance (21:56), a lengthy Q&A with the filmmakers and cast moderated by KCRW's Matt Holzman (44:57), Hollywood as a Character: The Locations of The Artist (5:10), and The Artisans Behind The Artist (multiple, approximately 2 minutes each covering the film's production).

*No, it didn't escape me that The Artist is a Franco-Belgian production. In fact, that seemed to amplify some of the bile directed toward the movie during its release (i.e. how dare the high-minded French produce this... this... ENTERTAINMENT?).

The Artist is available on DVD, Blu-ray, and VOD now.