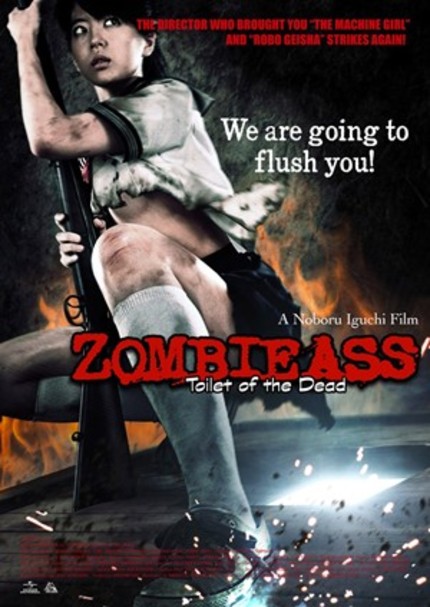 Japanese cult director Noboru Iguchi knows what he likes. He likes gore. He likes campy scifi. He likes karate. But mostly he likes tits and ass so it should come as no surprise that when Iguchi was approached by an independent producer willing to to write him a check to make whatever he wanted to make Zombie Ass was the result.

Iguchi follows his most polished and most critically successful film to date - Karate Robo Zaborgar - with an unrepentantly low budget slice of campy horror-comedy sleaze.

Zombie Ass delivers exactly what it promises on the box. Pretty high school girl and karate student Megumi is struggling to cope with the recent death of her sister and, seeking distraction, joins an odd quartet of friends on an equally odd camping trip. There's her pretty friend Aya, the lynchpin of the group. There's Aya's druggy, thuggish boyfriend Tak. There's large breasted, high maintenance drama queen Maki. And there's the nerdy Naoi, who doesn't really seem to have any connections to anyone in the group and is present largely to mug for laughs with his silly haircut.

The point of the camping trip? To catch fish in a river known for being rich with tapework and other parasites, parasites Maki plans to eat to help keep her thin. And while parasites they find they are not the parasites they went looking for. Instead Maki ends up eating an alien parasitical worm that bursts through her anus with it's sharp, sharp teeth before heading back inside and farther north to eat her brain and turn her into a mindless, shuffling zombie joining the throng of similar undead who emerge, doused liberally in feces, from beneath a village outhouse.

Yes, this is not just a zombie movie, this is an alien ass parasite zombie movie designed purely to allow Iguchi to indulge in his love of the female posterior. Juvenile in the extreme the film is driven by ultra-lowbrow sight gags and splatter effects - both practical and CGI - laced with a heaping helping of shit and fart jokes. And give Igushi credit for this much, at least: As basic as his fixations may be he presents them with an absolutely bizarre sense of ambition that sees the film climax in a massive methane fueled aerial battle between its bare-breasted teenage protagonist and an enormous anal worm queen.

While Karate Robo Zaborgar showed that Iguchi is more than capable of bringing his particular brand of madness to the masses when he so desires Zombie Ass is very much a film made for the hardcore fans. Simultaneously as silly and disgusting as it can possibly be Zombie Ass is one for those who have never stopped finding farts funny even as they've grown enough to develop a fondness for a bit of T&A.
Tweet Post Submit