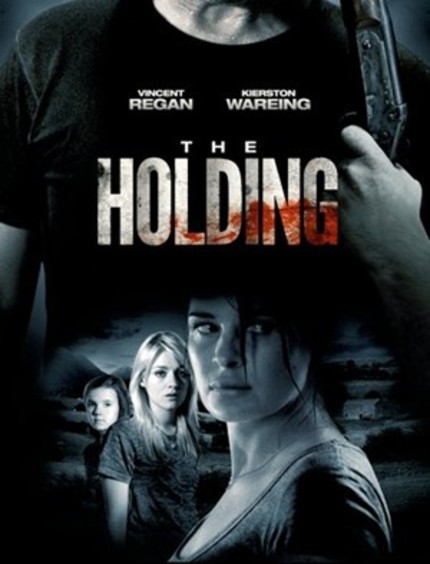 Cassie is experiencing severe financial difficulties, but is determined to hold on to the farm, come what may. It's more than mere piece of land, or "holding," to Cassie; it's the family's home. Grubby next door neighbors the Karstens (Terry Stone plays the father) desperately want to buy the farm for unknown reasons, and are willing to go to extremes to get it. Into this isolated setting strolls Aden (Vincent Regan), a friendly stranger who claims to be an old friend of Dean.

He immediately sets out to befriend Cassie and the girls, first helping with the difficult birth of a calf and then pitching in with household duties. He's angling for at least a temporary job, and because of the looming threats made by the nasty-looking Karstens, a father and son team, Cassie relents, though it's probably against her better judgment.

Hannah, 16, has Aden's number: 'You're just being nice to me so you can get into my Mom's knickers.'

True enough -- Aden doesn't even bother denying it to Hannah -- but the man is persuasively charming in a brutish, bad-boy manner, and Cassie hasn't had a man around for months. As her defenses wear down, Aden's intentions become more apparent, and Cassie's mothering instincts will need to kick in with a vengeance if she's to protect her family.

Susan Jacobson makes a strong feature directorial debut, taking full advantage of the beautiful countryside; Nic Lawson served as director of photography. The film's pace doesn't dawdle but is never in a hurry for most of the running time; it keeps motoring along. The script by James Dormer is a mixed bag, filled with good character details; Hannah is rebellious to the point of avoiding conversation with her mother, while Amy is a God-fearing, Bible-reading little girl. The push/pull dynamic of the family's respective relationships feels authentic until the wheels of the thriller convention get stuck in the mud, rendering everything less convincing. And once the wheels get unstuck, they keep flying off.

It's very tempting to describe The Holding as "--- ---------- [name of well-known thriler from the 80s] in the UK," but while the outline is very similar, it's those details that enable the film to feel fresh. (Also, it's told from a different character's POV.) The performances by Wareing and Regan certainly help to sell the story, even when their actions occasionally spiral into incredulity.

The Holding features strong women fighting back against evil male aggressors. If you question some of their chosen methods of defense, so much the better for the film having raised the issue in the first place.

More about The Holding