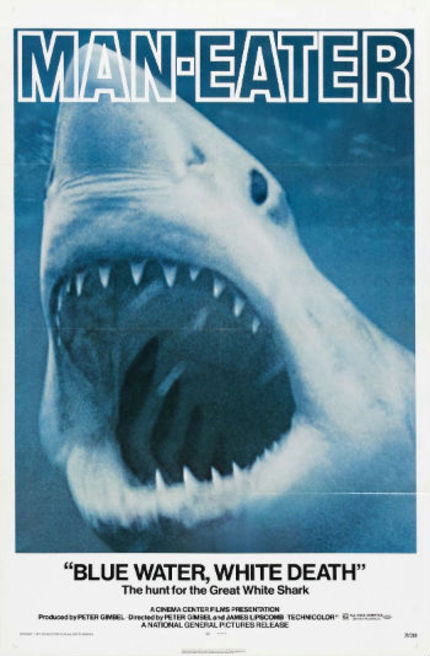 Beware: Sharks are in theaters again! Some who've already seen David Ellis' Shark Night 3D have praised its cheesy entertainment value. Whatever the final verdict on the film, there's no denying that it, as well as every movie featuring sharks made since 1975, swims in the very large shadow cast by Jaws. But four years before Steven Spielberg made everyone afraid to go in the water, Blue Water, White Death provided moviegoers with real-life thrills.

The documentary, directed by Peter Gimbel and James Lipscomb, follows a movie crew that traveled to South Africa in April 1969, determined to find a great white shark and to film it under water.

Gimbel, leader of the expedition, is one of five diver/photographers on the team, which included Stan Waterman, Valerie Taylor, Peter Lake (still photographer), Phil Clarkson (diving coordinator), Ron Taylor (the only member of the team who had seen a great white shark in person), and folk singer Tom Chapin, brother of Harry Chapin, who worked with the surface crew. As the expedition sails out to sea after a dockside press conference, Chapin sings and plays his guitar on deck.

If the names "Ron and Valerie Taylor" sound familiar, that's because they later were hired to shoot shark footage for Jaws. Some of the most realistic, terrifying footage in Steven Spielberg's classic is due to the willingness of the Taylors to take risks, and that same daring spirit is evident in Blue Water, White Death as well.

Their method of finding a great white shark is to follow a whale hunting ship and wait for a sperm whale to be killed. When that happens, the blue water turns red with blood, which attracts all kinds of sharks. But two weeks pass without any sighting of a great white.

Then the team thinks they have the right set of circumstances, and the divers descend under the sea at night, protected inside metal cages, to watch the sharks feeding on a whale. It's an eerie scene, underwater lights illuminating the diver/photographers as hundreds of sharks tear away chunks of flesh.

The next day, Gimbel thinks they can get better footage if they shoot outside of the cages, and the others agree; no one has ever heard of someone swimming free while sharks are in a feeding frenzy. Indeed, the footage is spectacular, with the sharks swimming around the divers, sometimes even bumping into their cameras. But still no great white.

The expedition heads ever onward, sailing to other locations in search of their elusive prey. The journey is filled with beautiful imagery: an angry yellow sun setting against a blood red sky, exotic sea creatures darting through and around coral beds, winged creatures searching for food. It's all gorgeous and fascinating.

The crew faces other dangers. Rough seas and an exceptionally strong current make it perilous for the divers to clamber back on board one afternoon, aggravating Gimbel, who later chides the cameraman for continuing to shoot while the divers needed practical assistance. Gimbel also runs into trouble himself when he suffers a case of "the bends" for ascending a touch too fast from a deep dive.

Gimbel presses forward, even after one or two people begin to express their feeling that it's time to give up. Finally, the team's persistence is rewarded.

To say the wait is worth it is putting it mildly. The footage that is finally captured is the stuff of nightmares, even though it's celebrated by the team as a great accomplishment. You can feel a bit of the "Great White Hunter syndrome" leak through all of the film, the idea that Man is entitled to bait wild creatures to do their bidding.

Yet they captured sights that hadn't been seen before, and lived to tell the tale.

Blue Water, White Death was released theatrically in the U.S. on June 1, 1971 by National General Pictures and was advertised heavily on television; I still remember the commercials giving me the willies. It was a good time for films inspired by real life; The Hellstrom Chronicles, released a few weeks later, utilized brilliant close-up photography of insects to warn of impending doom for the planet (and won an Academy Award for Best Documentary in 1972), while The French Connection, based on a true story and told in documentary style, hit theaters later in the year.

I never got to see the movie as a kid, but after it was issued on DVD for the first time in 2007, I picked up a copy as soon as possible. The Region 1 DVD from MGM presents a very good-looking picture, with only occasional moments that betray inadequacies in the original source material. The DVD includes an audio commentary by Valerie and Ron Taylor, Stan Waterman, and diving coordinator Rodney Fox, the rare individual who has survived an attack by a great white, and other extra features.

Repeat viewings have only enhanced my appreciation for the film. Blue Water, White Death may not be as outwardly thrilling as Jaws or its progeny, but respect must be paid to the daring team of divers / photographers for the challenges they faced and the risks they took. And it's all real, kids.